The Ernest Tubb Record Shop was founded by country music singer Ernest Tubb in partnership with his tax accountant Charles Mosley in 1947. Tubb was also the creator of the second-longest live radio show, second only to the Grand Ole Opry radio program, the "Midnite Jamboree."The main shop moved in 1951 to its current location at 417 Broadway to allow for more room for the live in-store broadcasts. The "Midnite Jamboree" is now recorded at the nearby Texas Troubadour Theatre. The Ernest Tubb Record Shop remains a staple in Downtown Nashville and is one of the most recognized record shops in America. 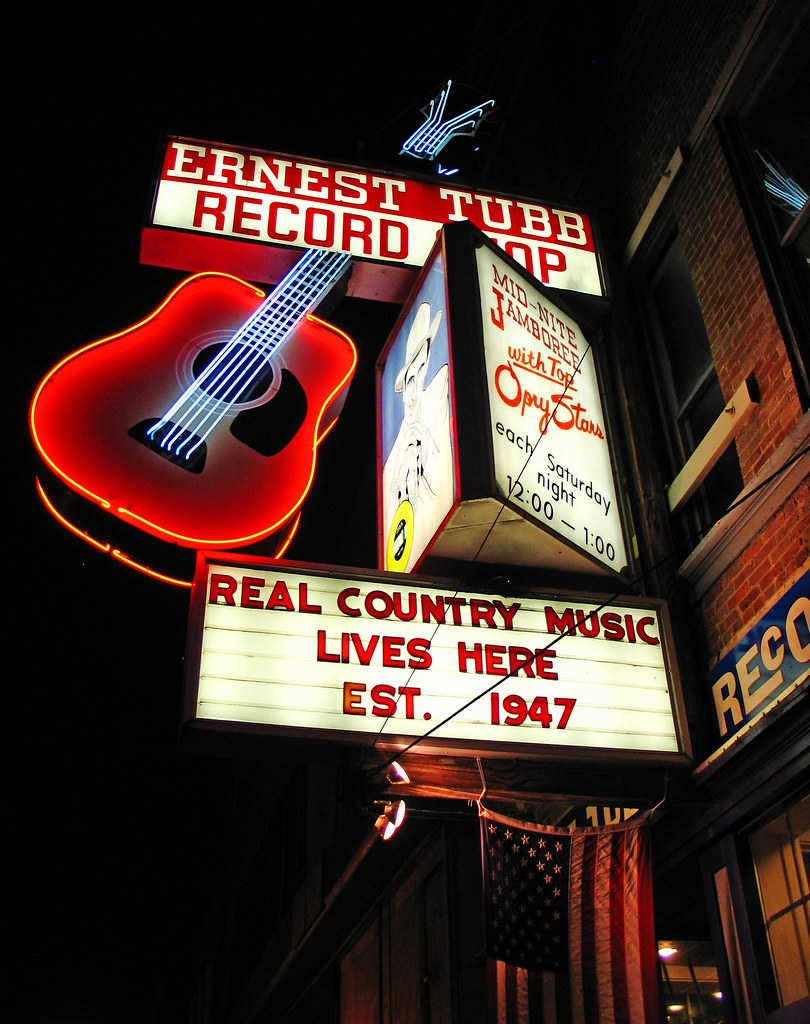 Statue of Ernest Tubb Inside the Record Shop 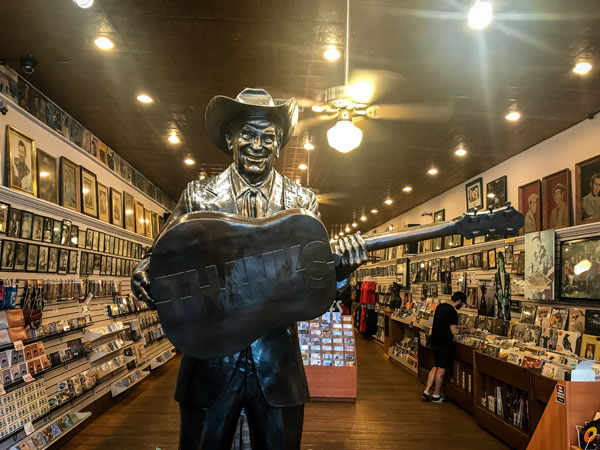 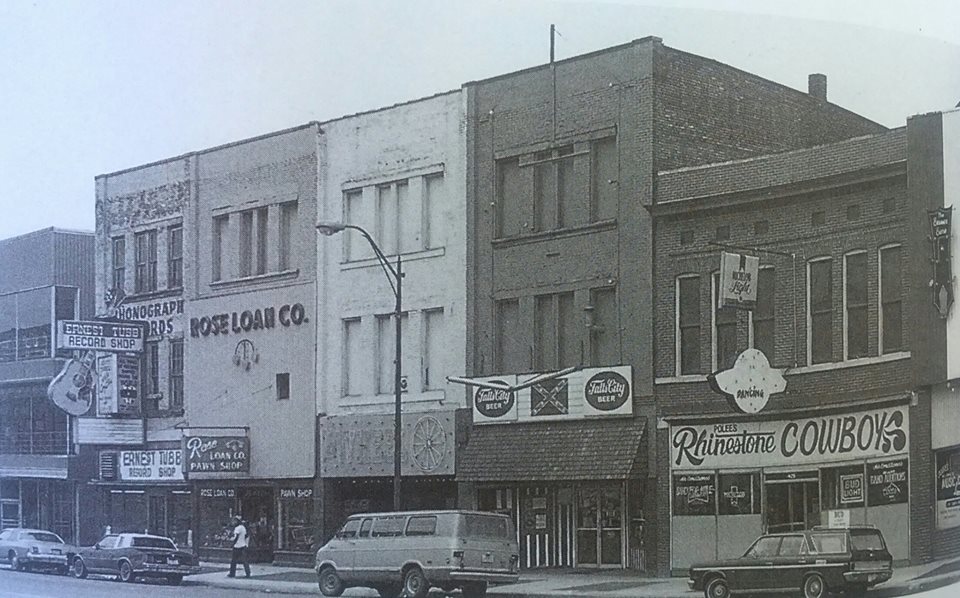 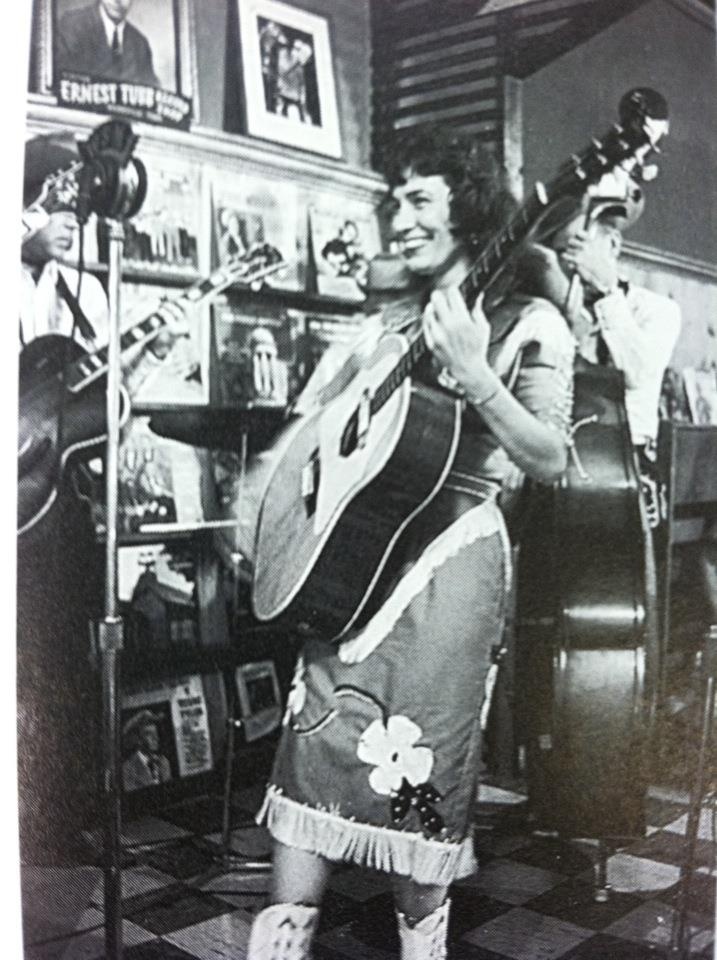 Ernest Tubb and the Texas Troubadours Performing on the Midnite Jamboree, Early 1960s 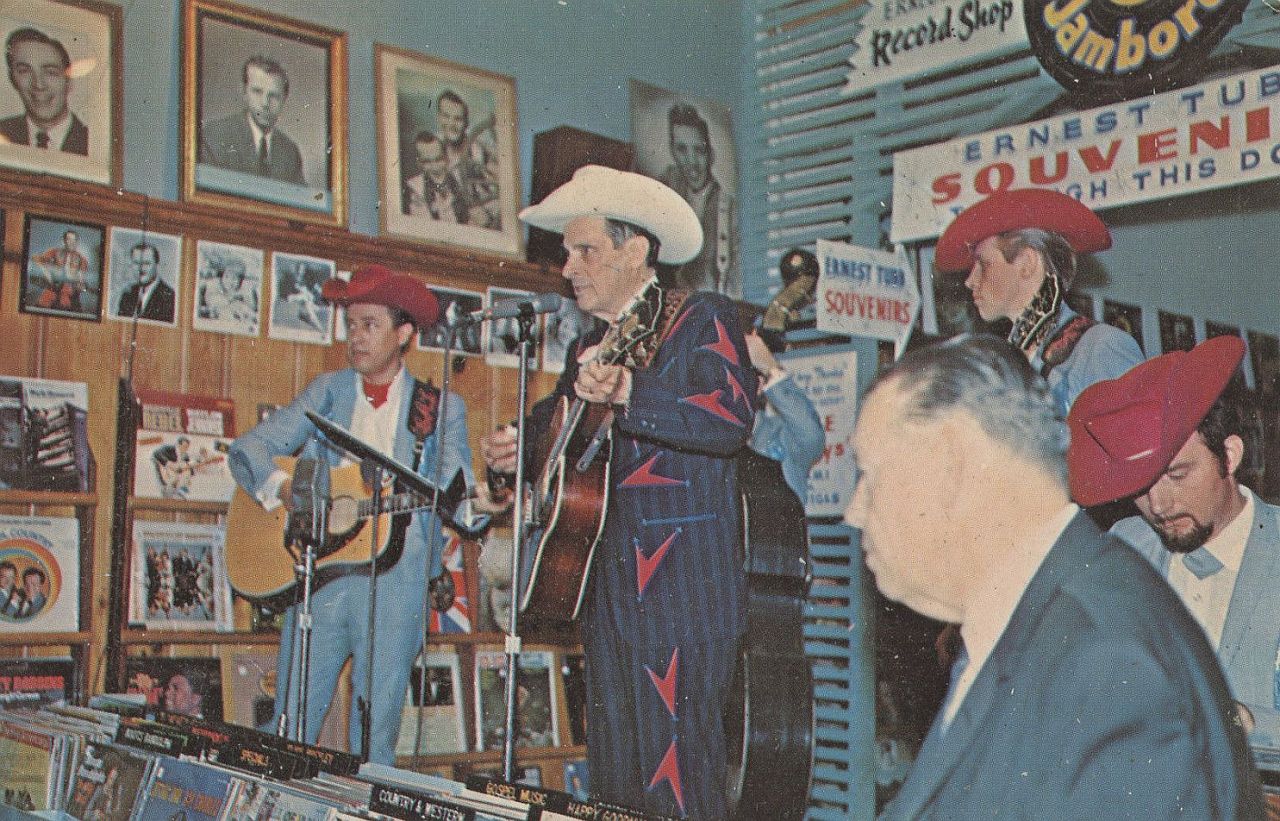 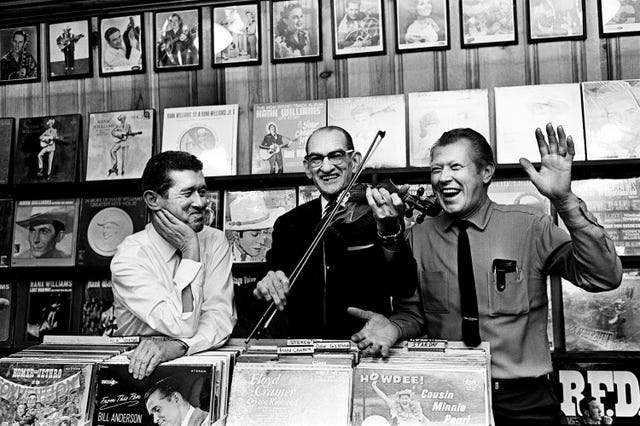 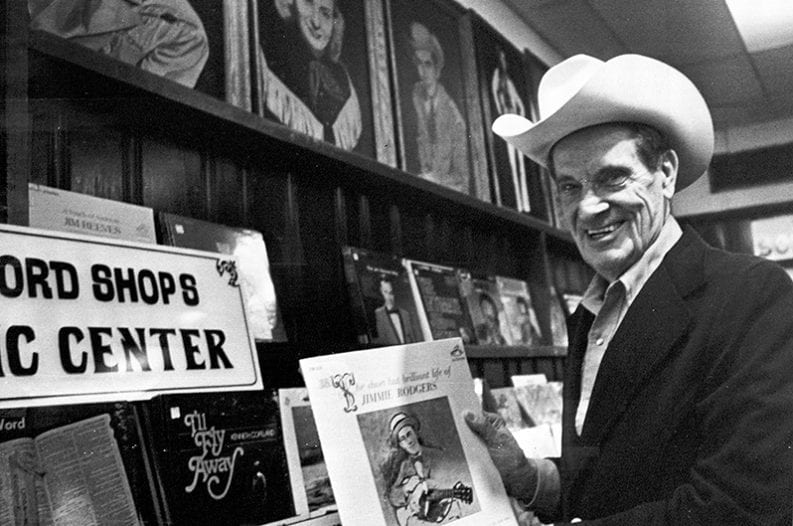 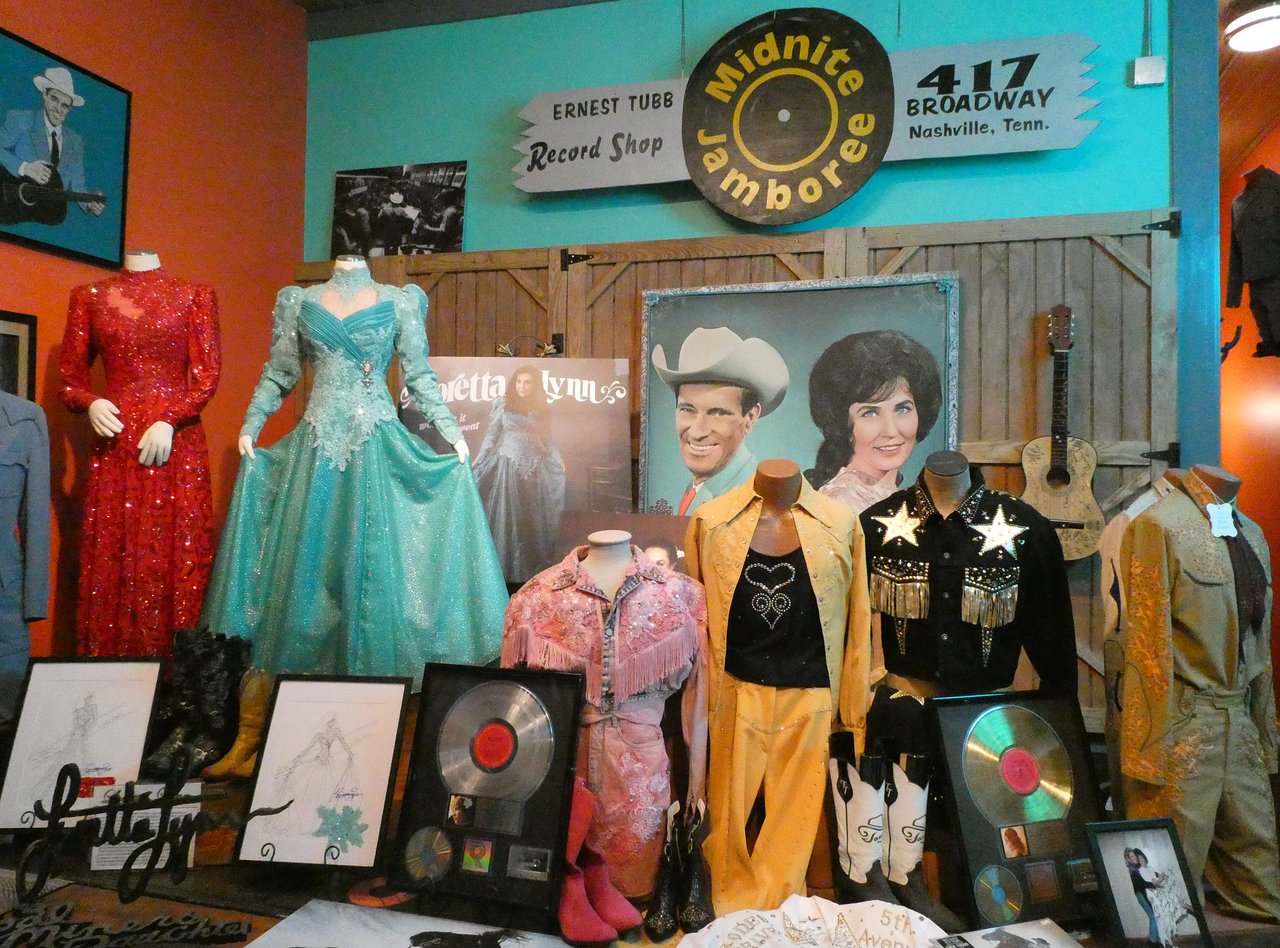 The Ernest Tubb Record Shop is the quintessential country music record shop, and one of the most well known in the country. Its rich history began in 1947, when country music singer Ernest Tubb, known as the "Texas Troubadour," opened it with partner and tax accountant, Charles Mosley. Tubb was inspired to open the record shop after touring the country and talking to fans about the difficulty in finding their favorite country records. Even in Nashville, finding records by country artists was hard because the majority of retailers sold classical and pop records. The first Ernest Tubb Record Shop opened on May 3, 1947 at 720 Commerce Street, and it was strictly a mail-order shop. After a few months of the shop being open, record dealers around the country reported an increase in sales of country music records advertised on the Grand Ole Opry. Wanting to promote the mail-order business, Tubb bought airtime on the Opry and soon started the famous Midnite Jamboree.

In 1951, the record shop moved to 417 Broadway to have more room for the Jamboree every Saturday night. The building in Downtown Nashville that is home to the Ernest Tubb Record Shop had an illustrious history prior to hosting the record store. It was built around 90 years before the store opened and was home to an ornamental plaster business owned by William Stockell. Stockell's plaster was used on iconic buildings such as the Tennessee State Capitol and the famous Belmont Mansion. After the Civil War broke out, the building was used as a hospital for Confederate soldiers. Many soldiers who fought in the Battle of Nashville ended up dying in the hospital, and they were taken down to the morgue in the basement. It has been reported that the soldiers continue to haunt the building, some employees have stated they had problems with electronics and have heard random footsteps.

Over the years, there have been multiple Ernest Tubb Record Shop locations, including one near Opryland, one in Pigeon Forge, and one in Fort Worth. In 2015, the Midnite Jamboree, hosted at the Texas Troubadour Theatre in Music Valley Village, was in jeopardy because of the cost in staging it and airing it every Saturday. It was decided the show would go on hiatus while an association was formed to support the weekly show. The show now airs at 10 CST instead of midnight. The record shop has been featured on television over the years but it gained the most notoriety when it appeared in the 1980 movie Coal Miner's Daughter, a biopic about Loretta Lynn, who gave one of her first performances at the Ernest Tubb Record Shop. The Ernest Tubb Record Shop offers a range of vinyl country albums covering decades and remains a staple in Downtown Nashville.