This marker erected in 1981 that stands on the Sojourner Truth Building. 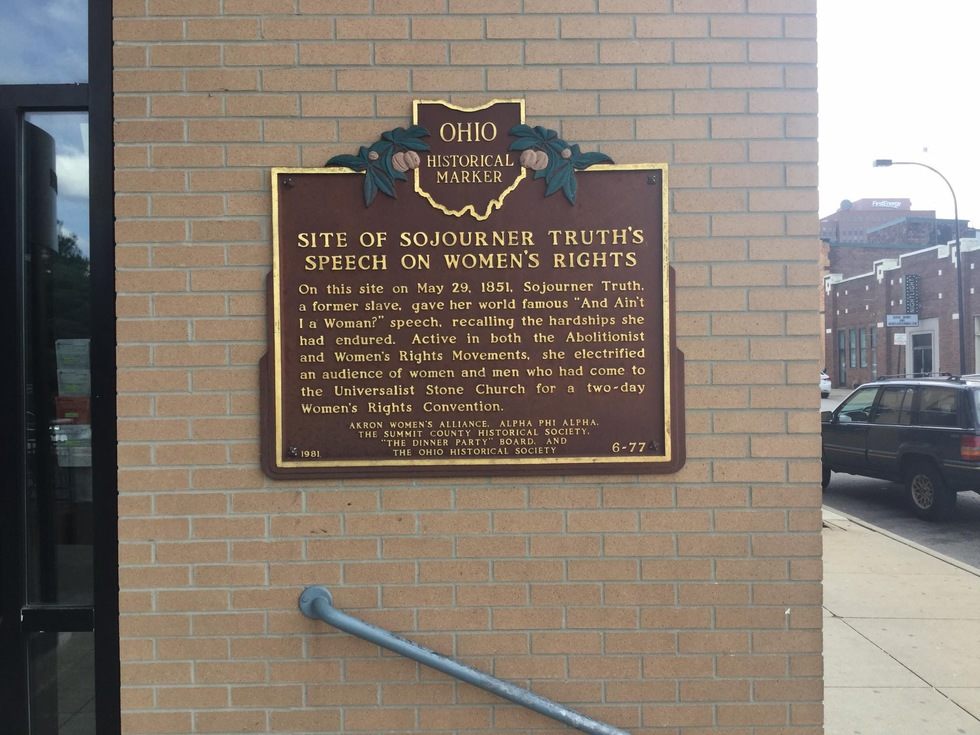 The portraits Truth sold to support her orations. Inscribed at the bottom "I sell the shadow to support the substance" 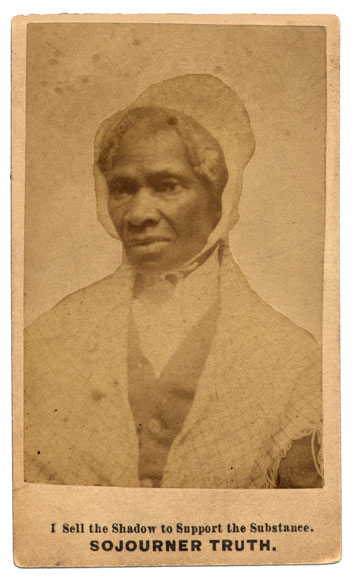 Sojourner Truth was born into slavery as Isabella Baumfree in the year of 1797 in Ulster County, New York. Once she escaped to her freedom Truth became the first African American woman to win a lawsuit in the United States. This lawsuit, filed in 1827, was to free her son Peter from slavery as he had been illegally sold. Less than a decade later, in 1835 she won a second lawsuit against a newspaper for slander. By this point, Truth was already becoming a public figure. In 1844, she joined the utopian abolitionist organization the Northhampton Association for Education and Industry and became acquainted with famous abolitionist writers and orators such as Fredrick Douglass and William Llyod Garrison.

After joining the Northampton association, her career as an orator took off. Although a captivating orator, Truth was illiterate had her grandson Sammy Banks accompany her on her travels to assist with reading and writing. In 1850, she dictated her autobiography to an acquaintance from the now disbanded Northhampton Association, Olive Gilbert. It was titled The Narrative of Sojourner Truth, A Northern Slave. In 1851 at a women’s rights convention in Akron, Ohio, she gave one of her most famous speeches, “And Ain’t I a Woman?”  at the Universalist Stone Church, which is now a vacant building entitled the “Sojourner Truth Building.”

Although the most famous version of this speech is still referenced today by writers and figures such as Toni Morrison, there is much controversy surrounding its publication. There was no original copy written by Truth since she could not write and the speech had impromptu references to ministers who had spoken before her. The two published references to her speech provide two very different accounts that differ in tone and dialect. The president of the convention, Frances Gage, published a version of the speech twelve years after it was given. This version, which is the one commonly used now, contains a southern dialect. Problematically, Sojourner Truth was born in New York and spoke Dutch until she was nine years old. It is unlikely she would have spoken with a Southern dialect. A second version, published by a reporter only a few months after, seems to present a more accurate version containing more of a northern dialect.

Although it can never be proven which version rings truest, the speech is still an important piece of literature, used over centuries, to advocate for the equality and strength of African-American women. This marker was created in 1981 with the help of the Akron Women's Alliance, Alpha Phi Alpha, The Summit County Historical Society, "The Dinner Party" Board, and The Ohio Historical Society. It can be found on the empty Sojourner Truth Building that stands in the place that used to hold the Universalist Stone Church, where Truth's historic speech was given.