For more than three decades Veterans Stadium was home to Major League Baseball's Philadelphia Phillies and the National Football League's Philadelphia Eagles. The stadium was known for rowdy fans, iconic sporting events, and several other events between its opening day on April 10th, 1971, and the final game on September 28th, 2003. 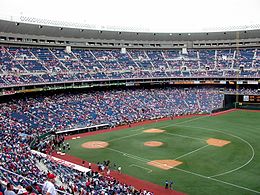 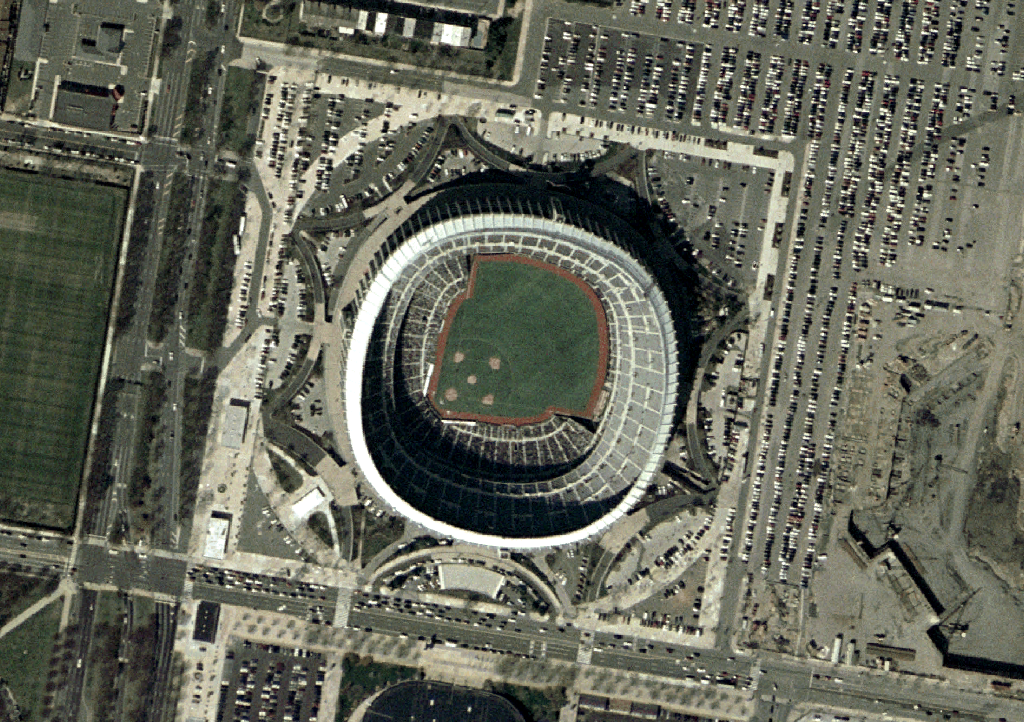 Veterans Stadium was a staple of Philadelphia life and its skyline for many years as it was home to multiple sports and events over the past three decades. There are many different opinions dealing with Veterans Stadium, but most do not matter now that it has been torn down. Even after being torn down, it has retained its status as one of the most problematic stadiums in the country.

This reputation first began when the arena was being built, it was supposed to have been completed by 1970 but due to a strike from workers, it was delayed even father than it would have been by just weather and construction. Construction started on October 2nd, 1967, and finally finished, opening the stadium April 10th 1971, one year after it was scheduled to be opened. With the start of the stadium already a mess, things did not improve drastically from there.

The idea for this new stadium sparked in the late fifties, started by the Phillies owner, Bob Carpenter. The owner of this baseball team needed a new place to play since their current stadium at the time, Connie Mack, had been built in 1906 so it was starting to fall into disrepair, making the decision for a new one more palatable to voters. Voters agreed to build a stadium to house both the Phillies baseball team and the Eagles football team, who previously played at the University of Pennsylvania. Having a combined Stadium would mean that it was in use more of the year which would be helpful for sales and for the community around it, in theory.

The Phillies were the first team to play at the Old Vet, as it had been nicknamed, Saturday, April 10th in 1971. The Phillies opened the stadium in style, beating the Montreal Expos in front of a large audience, kicking off the life of their new home with a strong good note. On September 26th, 1971 the first football game occurred as the Eagles played the Dallas Cowboys. The stadium was actually one of the largest that a NFL team played in with over 60,000 seats. It cost 45 million to build but was expected to bring in enough money having been home to both a baseball team and a football team.

Regular season games for both teams weren’t the only things to be hosted at Veterans Stadium. Sometimes soccer teams, the Atoms, and the Fury, played on the field. The field also hosted amateur and minor league baseball, as well as high school football. Sports were the focus at Vet Stadium, but it also held various concerts and the annual Jehovah’s Witnesses convention.

The stadium saw many landmarks, including the longest home run in stadium history, hit by Pittsburgh Pirate Willie Stargell on June 25, 1971.They also hosted Game 6 of the 1980 World Series on October 21, the game in which the Phillies won the World Series for the first time. In that very same year the Eagles football team won the NFC Championship game. On both of those occasions though there needed to be a police presence to control the rioting crowds. The stadium also hosted the latest finishing game in baseball history, finishing at almost 5 in the morning, twelve hours after starting the past afternoon. The Phillies lost that game, but have won the NLCS twice in their home stadium, and had many a no-hit game pitched. The stadium also held the Army-Navy game which was apt with the title for the field. However, it was at one such Army-Navy game that a railing in the stand collapsed and eight people were injured.

The final football game was between the Eagles and the Tampa Bay Buccaneers, suffering a hard loss the Eagles must not have been too upset to move to their new field, called Lincoln Financial, later that year. The final game ever was also a loss, but this time of the Phillies to the Atlanta Braves on September 28th, 2003. The last words ever broadcast at the park were “It’s on a long drive… it’s outta here!” by Harry Kalas, using his trademark home run call. April of 2004 the Phillies moved into Citizens Bank Park.

Before the Phillies had even officially moved over to their new field the Vet was being demolished. On March 21, 2004 it was brought down in 62 seconds after 32 years of being one of the great sights in the city. There is now a plaque and monument where the stadium once stood that gives notice to all veterans and was dedicated by Phillie’s baseball team before their first game. There was even another marker placed a year after the last game ever, a historical sight to remind those of the epic site, they even added to the memorial by putting markers where goalposts, home plate, and the pitcher’s mound used to be as well as the bases.

“Veterans Stadium - History, Photos & More of the Former NFL Stadium of the Philadelphia Eagles.” Stadiums of Pro Football - Your Ticket to Every NFL Football Stadium, www.stadiumsofprofootball.com/stadiums/veterans-stadium/.