This is the home of Mrs. Loucille Plummer, a prominent society member and civil rights activist during the Civil Rights Movement. The house has even greater significance given its location as the location of the arrest of Mrs. Mary Parkman Peabody, a 72-year old mother of the Governor of Massachusetts. She was placed under arrest for trying to be served in a racially integrated group at the Ponce de Leon Motor Lodge on March 31, 1964.

A picture of the current conditions of the residence at 177 Twine Street. The marker post is also depicted in the front yard. 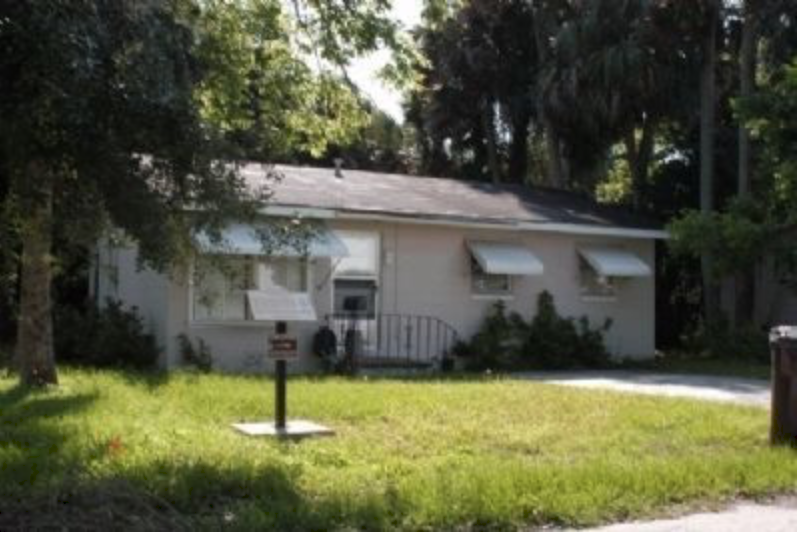 An image of the marker present at 177 Twine Street with a description of the location and the importance of the site. 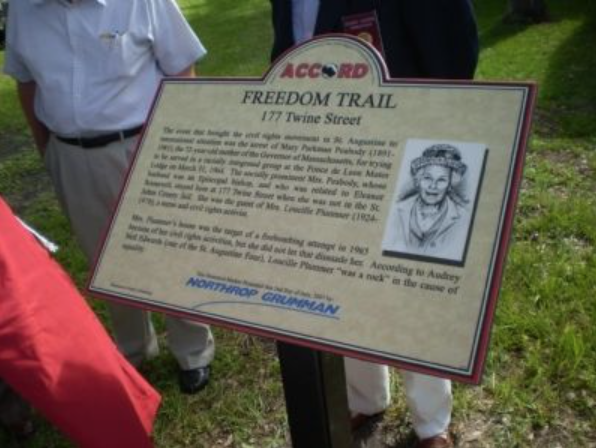 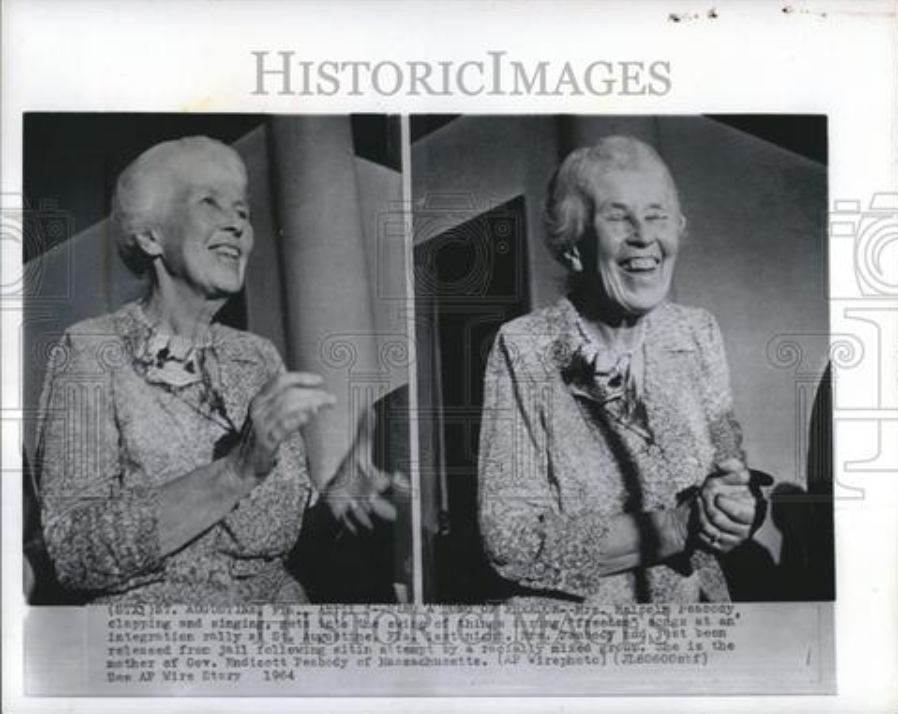 This Historical Marker was presented on July 2nd, 2007 by the ACCORD Freedom Trail Project. It was specifically elected to be presented on this occasion for the significance of the 40th commemoration of the civil rights demonstrations of Saint Augustine. This marker is located north of the Willie Galimore Community Center. Marker is at or near this postal address: 177 Twine Street, Saint Augustine FL 32084, United States of America.

The event that brought the civil rights movement in St. Augustine to international attention was the arrest of Mary Parkman Peabody. She was a socially prominent woman, whose husband was an Episcopal bishop, and who was related to Eleanor Roosevelt.

Mrs. Peabody's sole intent on traveling to Saint Augustine was to desegregate the hotels and restaurants in the area. Two of her white friends, a Harvard professor and the wife of the president of the Episcopal Theological Seminary, agreed to go with her. They proceeded to look for the accompaniment of African Americans. Her 72 year old self, and ninety-two others were arrested for their refusal to leave the premises, during the participation in a sit-in at The Ponce de Leon Motor Lodge Restaurant where she was refused service.

She was invited to stay by Mrs. Loucille Plummer's residence, at 177 Twine Street when she was not in the St. Johns County Jail. Her participation in the civil rights movement, the offering of help to Mrs. Peabody lead Mrs. Plummer's house and her housing of a white student for a summer tutorial program lead her home to become the target of a firebombing attempt in 1965.

Mrs. Plummer's role and duties during the activism was the secretary of the Florida Headquarters for Martin Luther King, Jr.'s Southern Christian Leadership Conference. She was a civil rights activist as well as a nurse at the local Flagler Hospital. However, her participation in the civil rights movement lost her her job at the Hospital.