The most modern rendition of St. Philip's Episcopal Church in New York, New York was designed and built under the vision of Vertner Tandy in 1910. Jewel Vertner Woodson Tandy was the first African American to be licensed as an architect in New York. St. Philip's was a primarily Black church, and was often the victim of vandalism and attack from angry whites. The original structure was made of wood, but after suffering fire damage, was rebuilt using stone. Tandy, in conjunction with his business partner George Washington Foster, designed the new church in Neo-Gothic fashion. 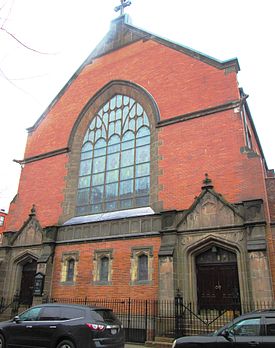 Jewel Vertner Woodson Tandy was the son of a builder in Lexington, KY. His father migrated to the Bluegrass State shortly after the Civil War ended in 1865. Vertner attended Tuskegee Institute where he studied architecture under the guidance of Booker T. Washington. He later transferred to Cornell University. After continuing his education at Cornell, Tandy became the first African American to be licensed as an architect in the state of New York. He started a company with George Washington Foster, and the team designed and built several notable buildings.

A major construction of Tandy & Foster was St. Philip's Episcopal Church in New York City. The church was carefully designed in Neo-Gothic fashion with great attention to detail. The structure was built primarily out of stone and brick, unlike the original building, which was made of wood. After the original suffered fire damage, Tandy & Foster were contracted to build the new church at its current location. St. Philip's Episcopal Church is still open as a place of worship, and has housed policeman as a barrack during riot times over the past 100 years.

Not only was Vertner Tandy a brilliant architect and trailblazer for African Americans in the workforce, but he was also the first African American to pass the U.S. military commissioning exam. Tandy was commissioned First Lieutenant  in the 15th Infantry of the New York State National Guard. He also founded Alpha Phi Alpha Fraternity, and served as its first treasurer.