During World War II, the United States Army operated Camp George Jordan in Seattle, Washington. The camp was segregated with African American troops housed on one side of the street and white personnel on the other side. The camp was closed in 1947.

The entrance to Camp Jordan, a segregated army training facility in Seattle during World War II. 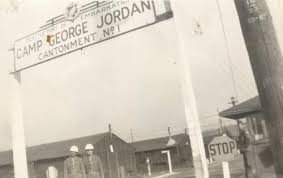 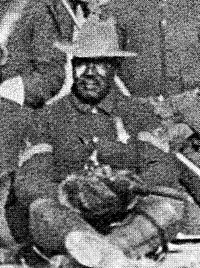 Camp George Jordan was originally referred to as the First Avenue Camp. The camp was later named after George Jordan, a black Medal of Honor recipient, in November of 1943. The camp was used to house and train troops as they traveled from Fort Lawton and Fort Lewis to the ships for overseas duty at Seattle’s Port of Embarkation. Camp Jordan was an active facility throughout World War II, but was closed after being placed on a list of surplus facilities in 1947.

Even though the camp was a temporary facility, it still housed two hundred troops at any given time to be exact. According to Dr. Duane Denfield, “These black soldiers did some of the hardest work with the least amount of glory. They loaded ships, emptied and filled warehouses, and drove trucks and buses.”

War was not the only thing on the minds of the soldiers at Camp George. “The had few recreational facilities, although the camp did have basketball and baseball teams that played in Seattle leagues and against college teams” (Denfield, 2012). Sports were not the only thing that kept the soldiers occupied. The Black USO was frequented as well as downtown Seattle.