Horton Point Lighthouse was erected in the summer of 1857 after a ship Captain William Brown wrote a letter to The Lighthouse Board. Mr. Brown suggested that a fixed light upon Horton Point would be valuable to Long Island navigators, as it would supply light between Old Field Point light and Plum Island light. This suggestion came nearly one hundred years after the first idea of placing a lighthouse on Horton Point. The initial idea to put a lighthouse on Horton Point came when George Washington was traveling on horseback along Long Island. He stopped in Southold to board a boat to Boston and met Ezra L'Hommedieu. Thirty-four years later, during his Presidency, George Washington commissioned a lighthouse in Horton Point. 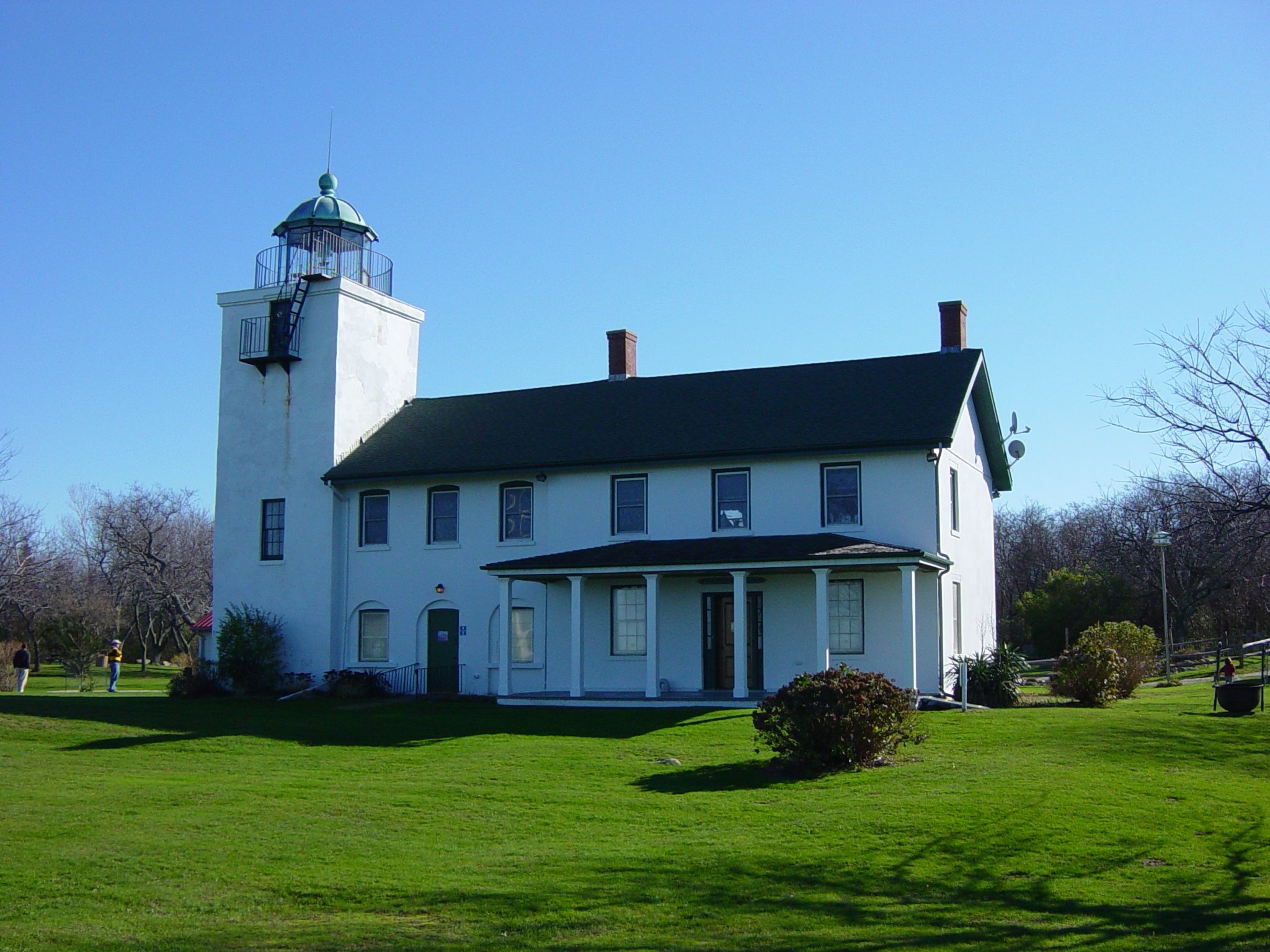 In 1640 Barnabas Horton had a land grant containing twenty acres called the "cliff lot" which he used to graze cattle.  On May 1, 1826, eight acres of the "cliff lot" was sold to Israel Case by the local Sheriff in the amount of one hundred dollars, due to a lawsuit against Joshua Horton.  On August 14, 1830, Mr. Case sold the property to Albert J. Tillinghast.  Eventually, Mr. Tillinghast sold the property to Charles and Hannah Payne.  In 1854 The Light-House Board offered Mr. Payne five hundred dollars for four acres of his property.  However, Mr. Payne was wanting six hundred dollars.  After negotiations, The Light-House Board offered to purchase four more acres for five hundred and fifty dollars.  The offer was excepted and Charles and Hannah Payne sold their property to The Light-House Board in October of 1855 for five hundred fifty dollars.
In February 1756, the idea to put a lighthouse on the Horton property came as George Washington was riding horseback through the area while intending to take a boat to Boston from Greenport.  However, it wasn't until 1790, while Mr. Washington was the President of the United States, that he commissioned a Horton Point Lighthouse.  However, a Montauk Point Lighthouse was placed in Turtle Hill instead, after Ezra L'Hommedieu, representative of the New York Chamber of Commerce, selected the area.
In 1853, the idea was presented again through a letter suggesting that a lighthouse on Horton Point would be a great investment and a beacon to navigators.  As there was no light on Long Island from Old Field Point Light to Plum Island Light.
On May 19, 1857, construction on the Horton Point Lighthouse had begun.  A Scottish immigrant and former engineer in Brooklyn Navy Yard, William Sinclair, was asked to oversee the project due to his experience.  On October 12, 1857, the Horton Lighthouse was completed.  The lighthouse light was lit on October 15, 1857. The total cost of the lighthouse came to $12,412.
On June 4, 1857, William Sinclair was asked to be the keeper of the lighthouse for an annual wage of four hundred dollars.  He accepted the position.   The lighthouse light could be seen as far as fourteen nautical miles and 110 feet above sea level.  The light was powered by sperm whale oil that burned in an Argand lamp.  However, in 1863 during the Civil War, the sperm whale oil was no longer used and lard oil took its place.  The lard oil caused a thick smoke when it burned.  As a result, there was more cleaning maintenance that had to be done to the lens and lantern panes.

Prior to the Horton Point Lighthouse, there had been thirteen shipwrecks  due to glacial rocks and the sandbar.  Because of this, the area of water around Horton Point was called “Dead Man’s Cove”.

A second story addition was made to the lighthouse in an attempt to make a sleeping quarter for the assistant keeper.  This addition also allowed more area to use in the main space.

In WWII the lighthouse light was put out until after VJ Day.  The military utilized Horton Point Lighthouse as a spotter tower and landmark.  A temporary wood staircase was placed outside of the tower that allowed entrance for outside ground observers.  This kept the military from being distracted by the civilian observers during the conflict with Korea.

In 1976 restoration efforts were made to make the lighthouse suitable for the occupancy of the Society’s Director, George Wagoner.  In July of 1977 a Nautical Museum was opened at the lighthouse through Mr. Wagoner’s efforts.  In 1988 some volunteers from The Park District and The Historical Society made efforts to restore the tower and lantern room.  On June 9, 1990 the light was relit for the first time since WWII, after the tower was recommissioned by the Coast Guard.  The newest light in the tower is a VRB-25 rotating beacon.  The light is manufactured by a New Zealand company called “Vega”.  Today the Horton Point Lighthouse is maintained by both the Park District and The Historical Society.  The Coast Guard maintains the light.

Benfield, Clifford. History of the Horton Point Lighthouse. Southold Historical Society. Accessed December 11, 2017. http://www.southoldhistoricalsociety.org/history-of-horton-point-lighthouse. This article page is compiled by John D'Angelo and Carol House based on portions of the Horton Point National Register Nomination. With additions by Geoffrey Fleming, in 2007.