Built to provide crucial housing for workers at the new U.S. Naval Ordnance Plant when it began construction in 1917, Armor Park was designed as a self-sufficient township, complete with its own school (run by the U.S. Navy), recreation center, pool, and sports fields. The U.S. government also paved nearby roads and purchased additional trolley cars to cut commuting time into Charleston across the river. Workers lived within walking distance of the Ordnance Plant as it churned out naval weapons around the clock during World War II. For decades, Armor Park (and its sister development, Bungalow Park) helped spur the growth of South Charleston until it was demolished for the Riverwalk Plaza Mall and other economic projects. Nothing remains of the site today, but a short walk reveals its relationship to the Ordnance Plant (which still stands) and the development of South Charleston's identity.

Panorama of the Naval Ordnance Plant (center). Armor Park, nestled between MacCorkle Avenue and the Kanawha River, is at right. Armor Park provided homes for 85 families.

President Franklin D. Roosevelt tours the Ordnance Plant on Sept. 3, 1940. The car was made especially for the President. The "USSS" on the license plate stands for "United States Secret Service." 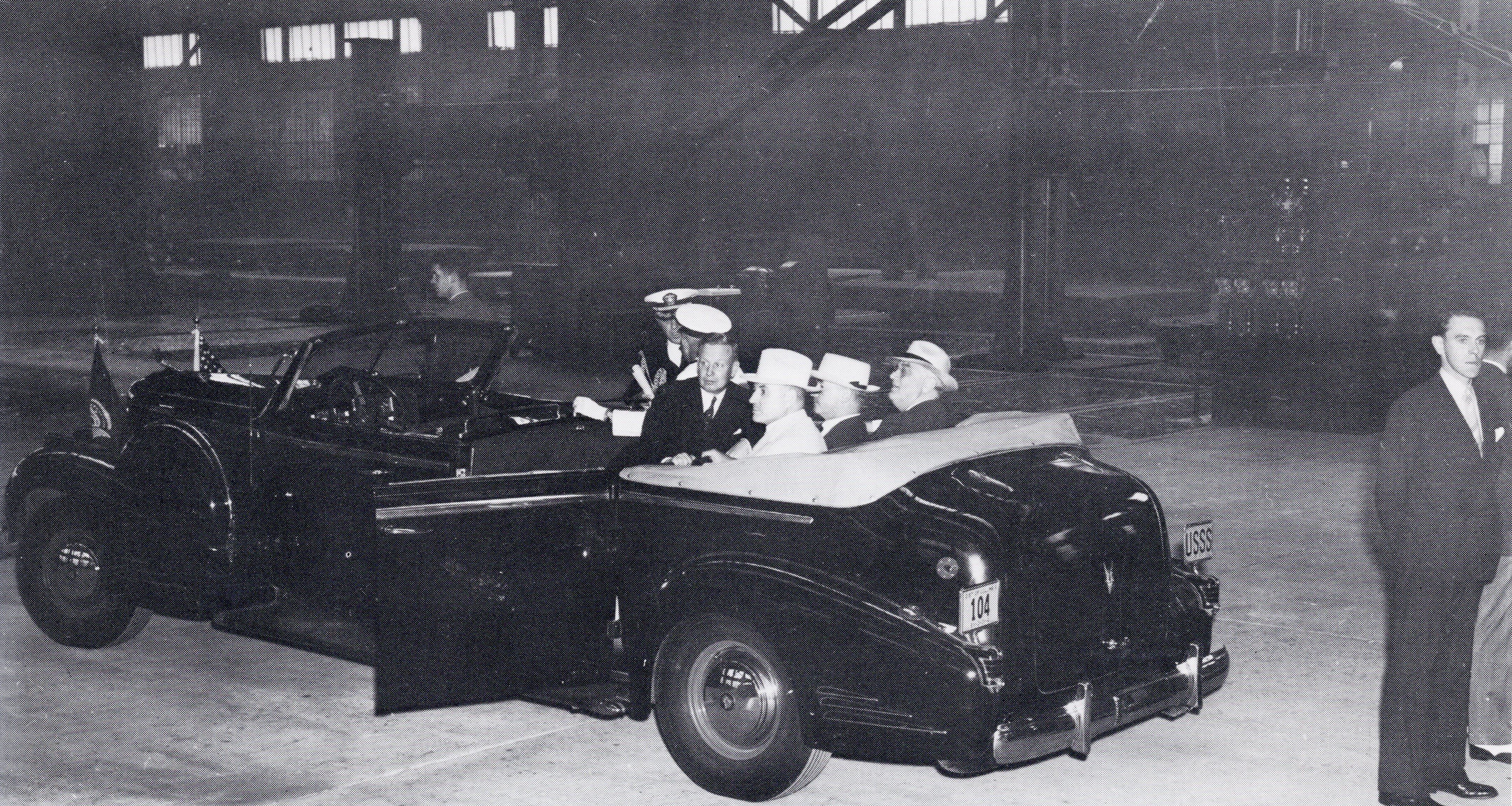 An elementary grade-level class of Armor Park School from 1934-1935. The school, which was administered by the U.S. Navy at the cost of $2.00/year per student, included a full suite of athletic facilities, including baseball and football fields. 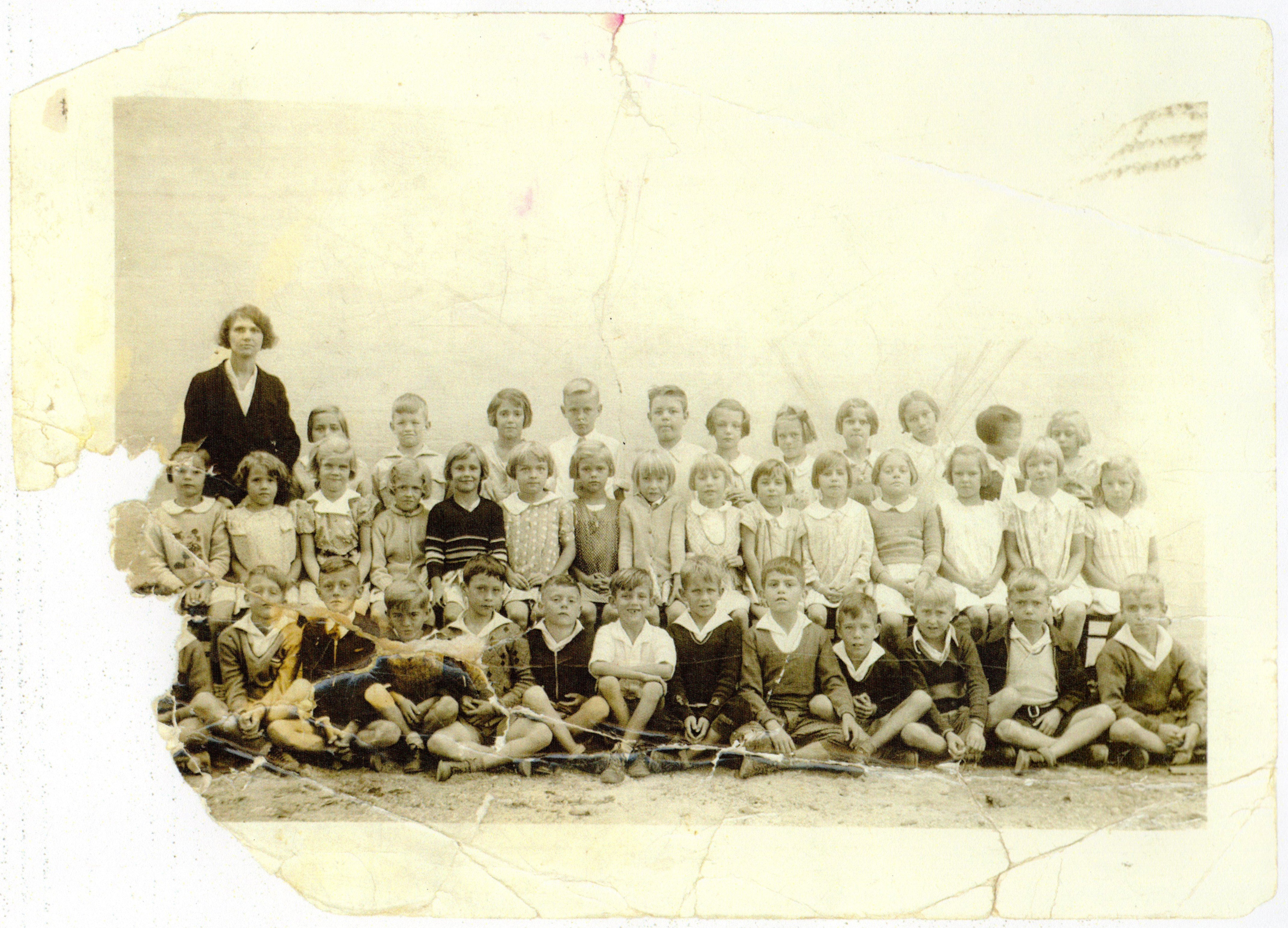 A closer view of Armor Park. All houses were two-storey stucco. Electrical service was extended from the Ordnance Plant. Heating and cooking were natural gas, which was inexpensive in the area. 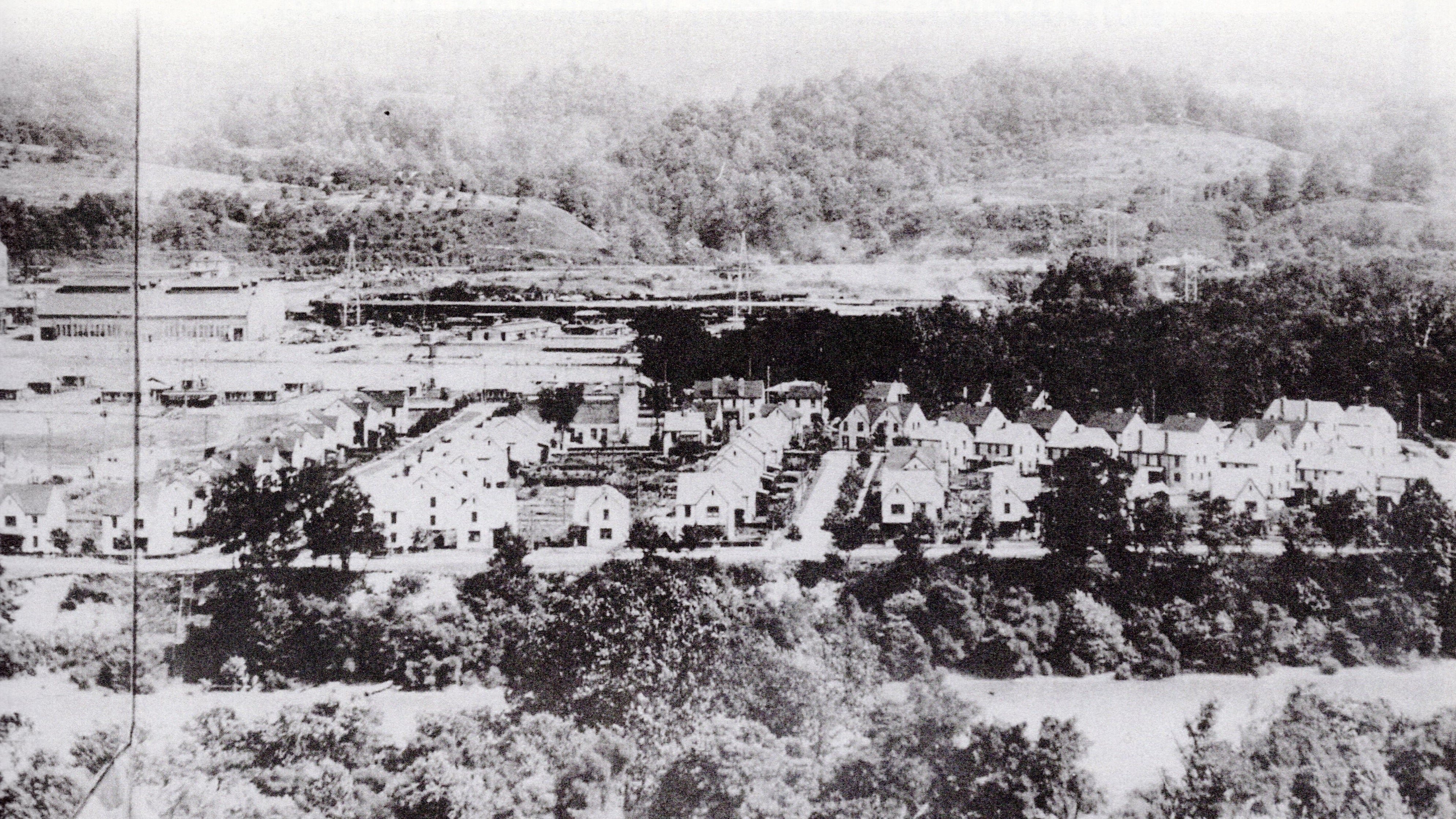 Armor Park Pool was 100 yards long by 75 yards wide, with a sandy beach. Annual passes to the pool cost 50-cents. Water was pumped in from the Kanawha River and chlorinated by a small barge towed around the pool by boat. 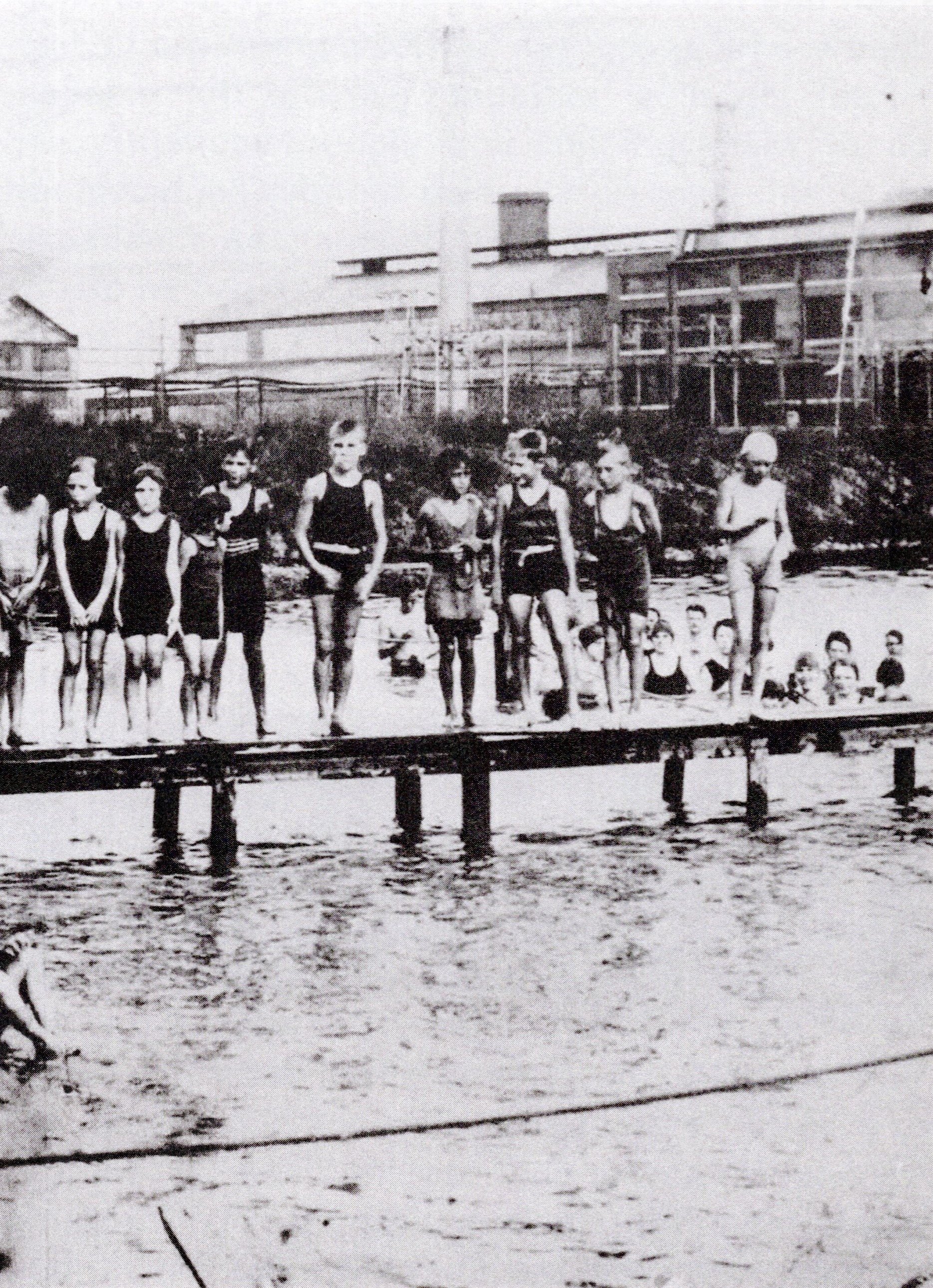 Armor Park School in the 1920s. The school was administered by the U.S. Navy for over twenty years, until after World War 2. 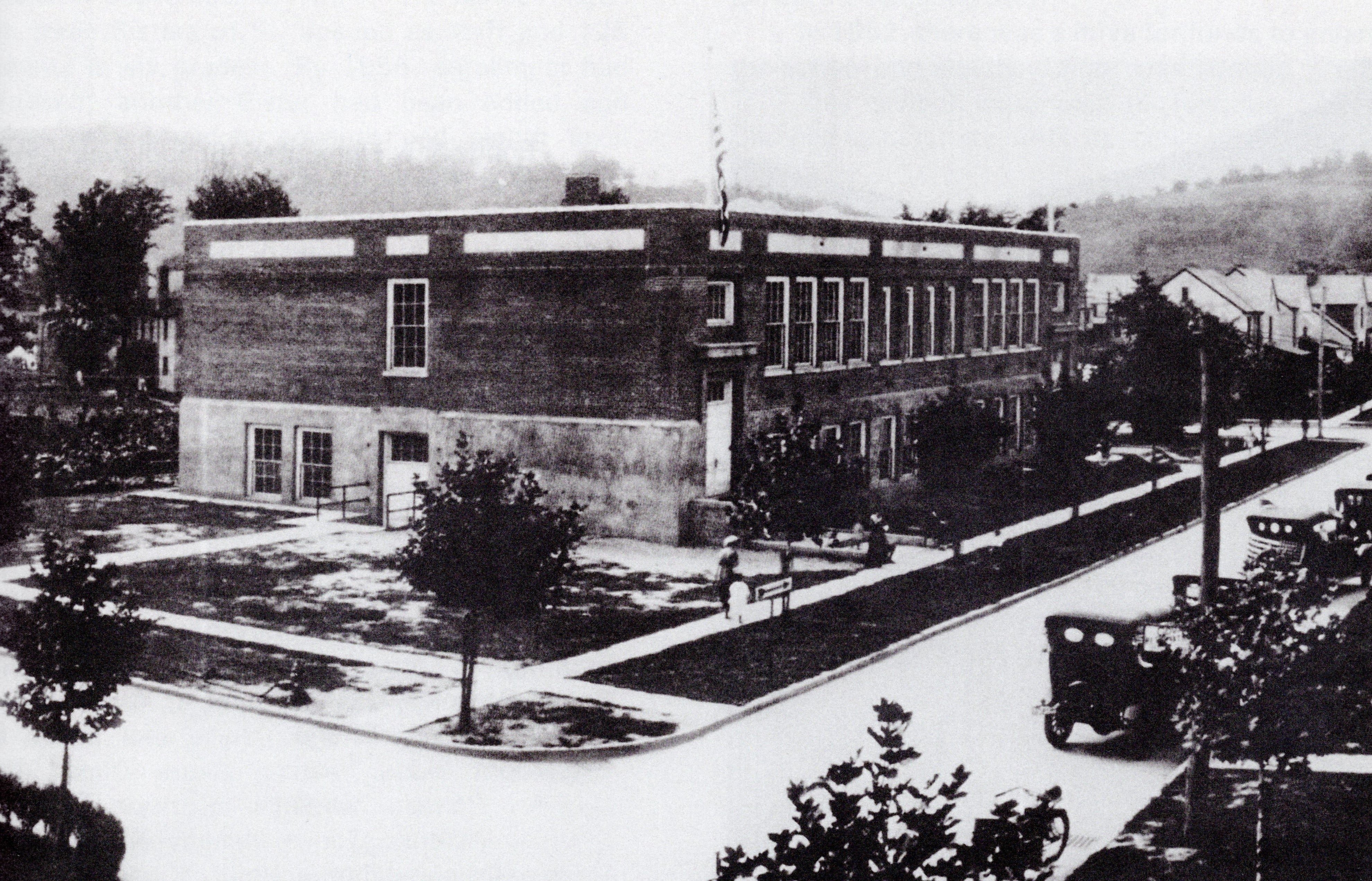 An overhead layout of Armor Park (the Kanawha River is at bottom, meaning that "North" is the bottom of the page). 8th Avenue is now called MacCorkle Avenue. Planners were worried about the smoke and noise of the nearby Ordnance Plant. 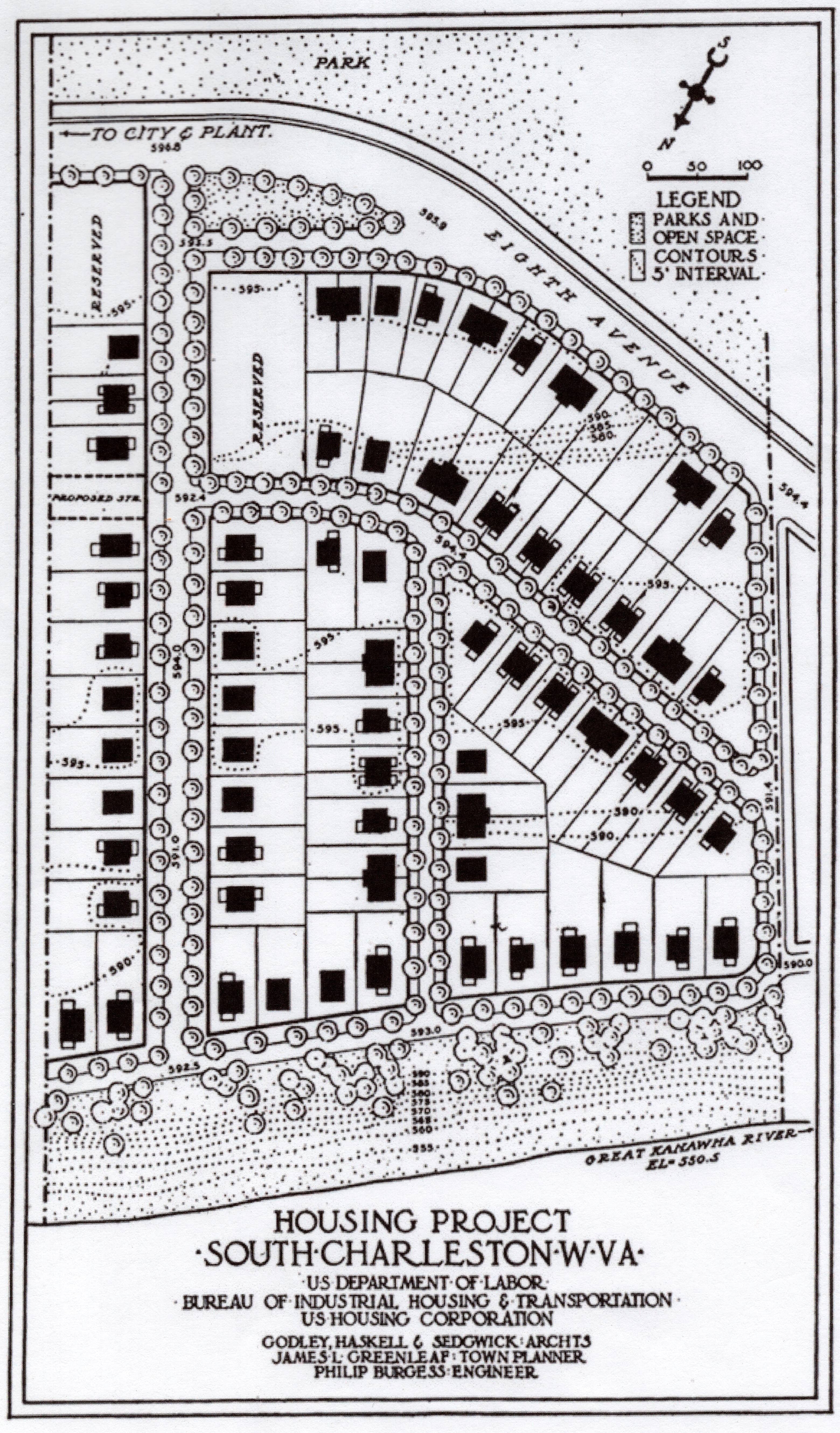 Schematic of a Type "B" home in the park. The Department of Labor report considered the homes to be "very well designed and the plans carefully worked out." 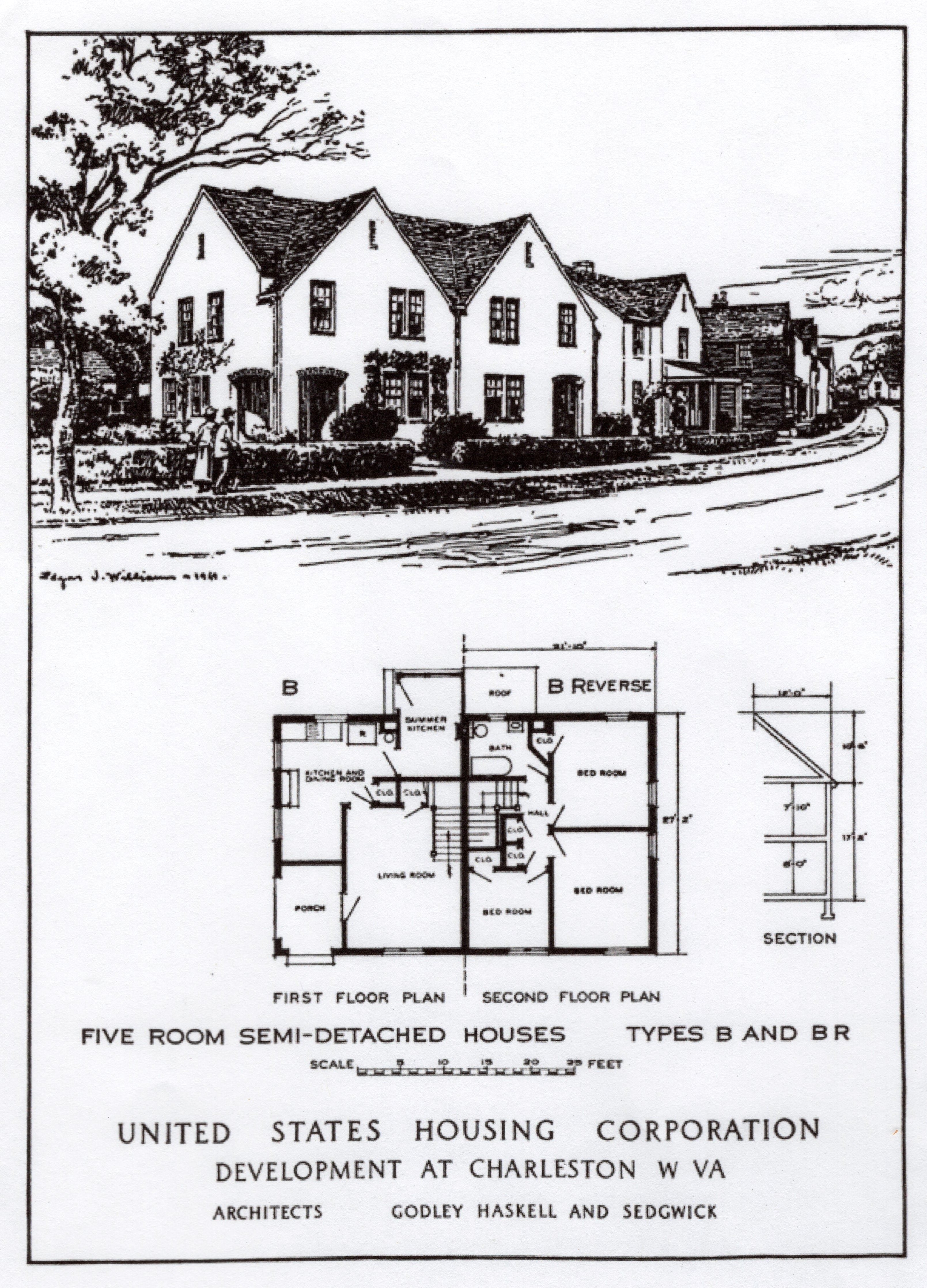 Schematic of a Type "D" home. Due to to cost, window blinds were not included with the homes--a fact important enough to be included in the Department of Labor's report in 1919. 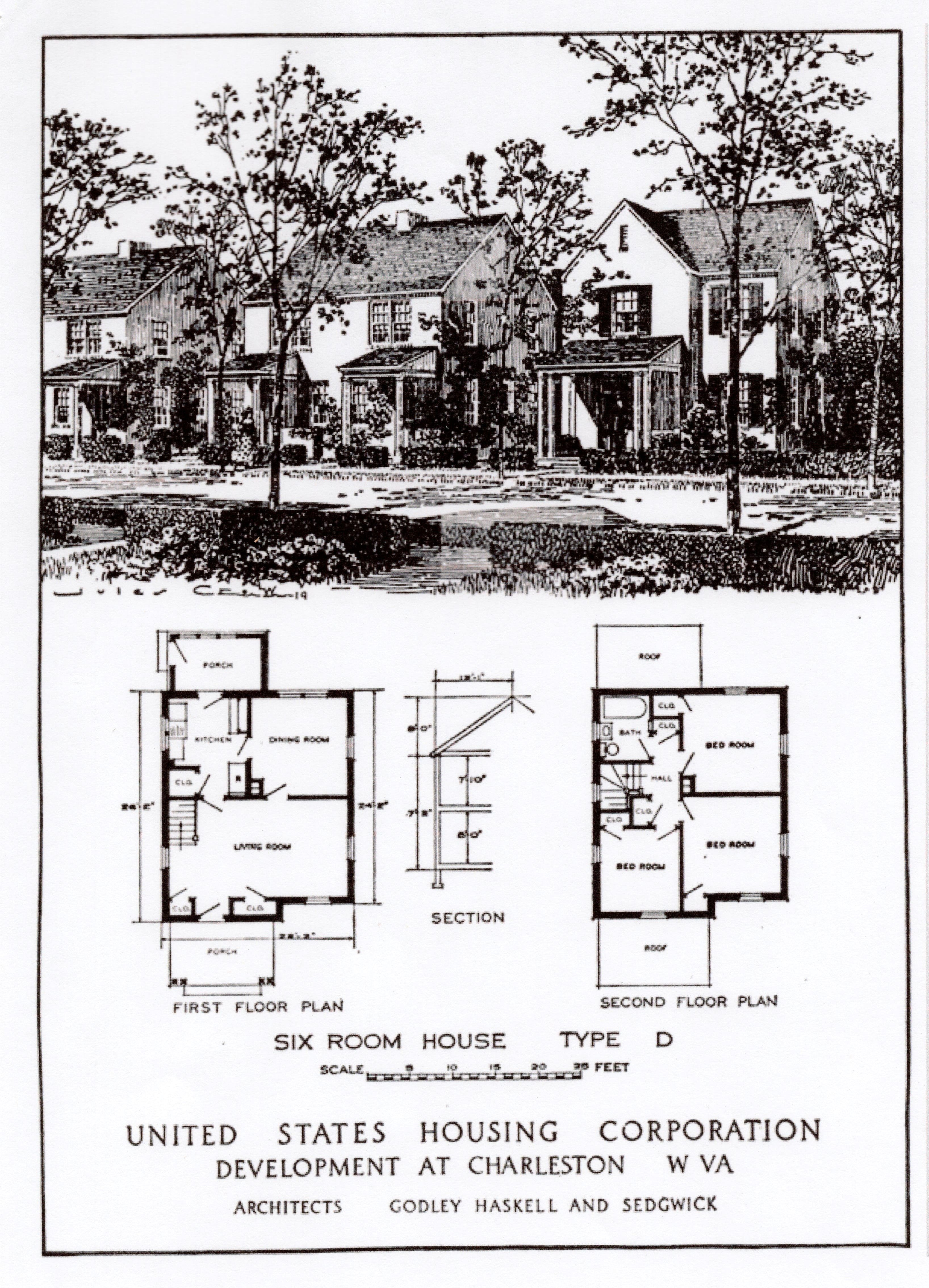 A type "E" home. Since the land was free, each home's lot was unusually large for government housing. This made it expensive to fence each yard, so hedges were substituted in most places. 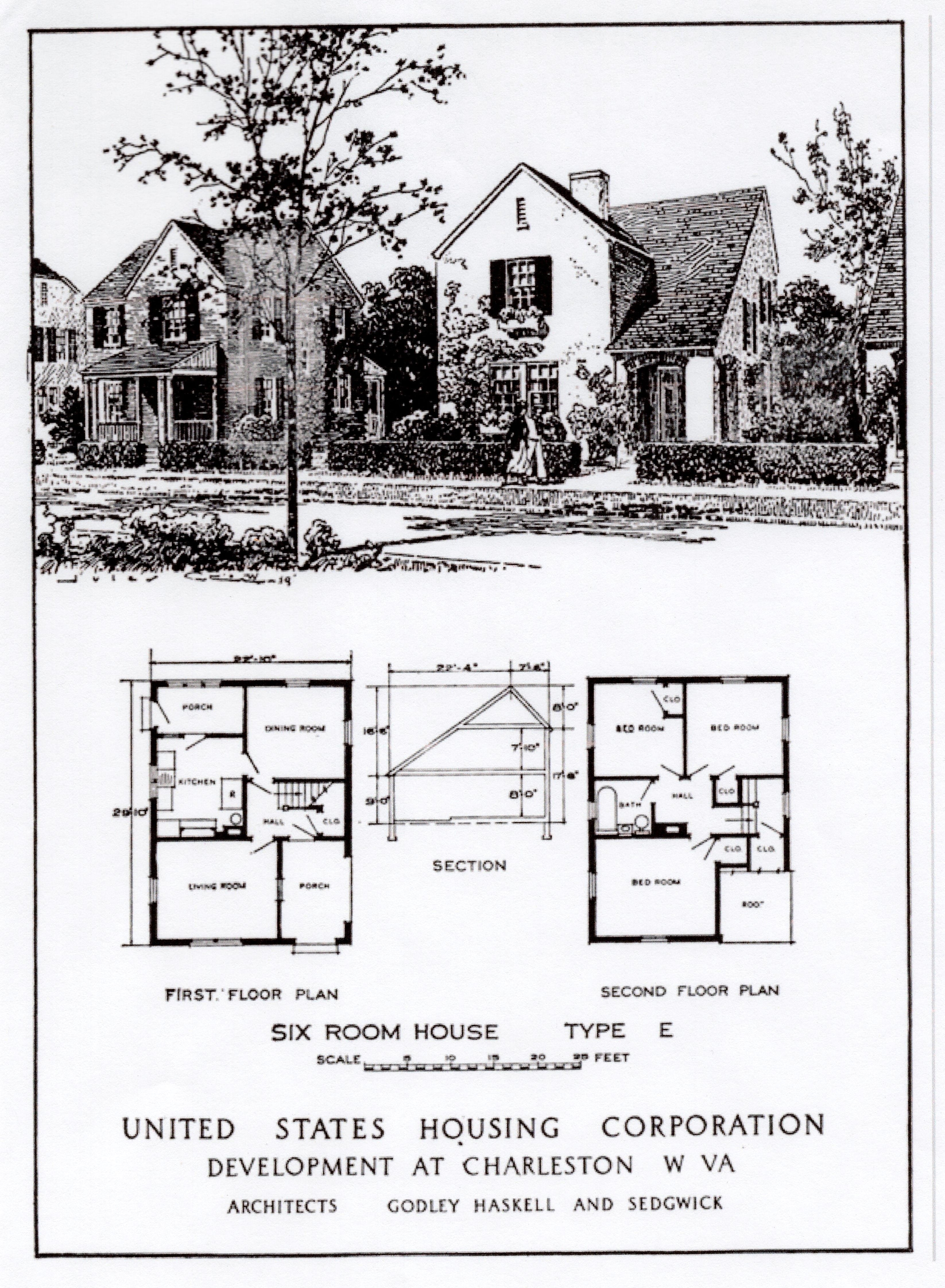 Type "G," the largest of the Armor Park homes with 8 rooms. Despite the many amenities of Armor Park, sewage was pumped directly out into the Kanawha River, a common waste disposal practice at the time. 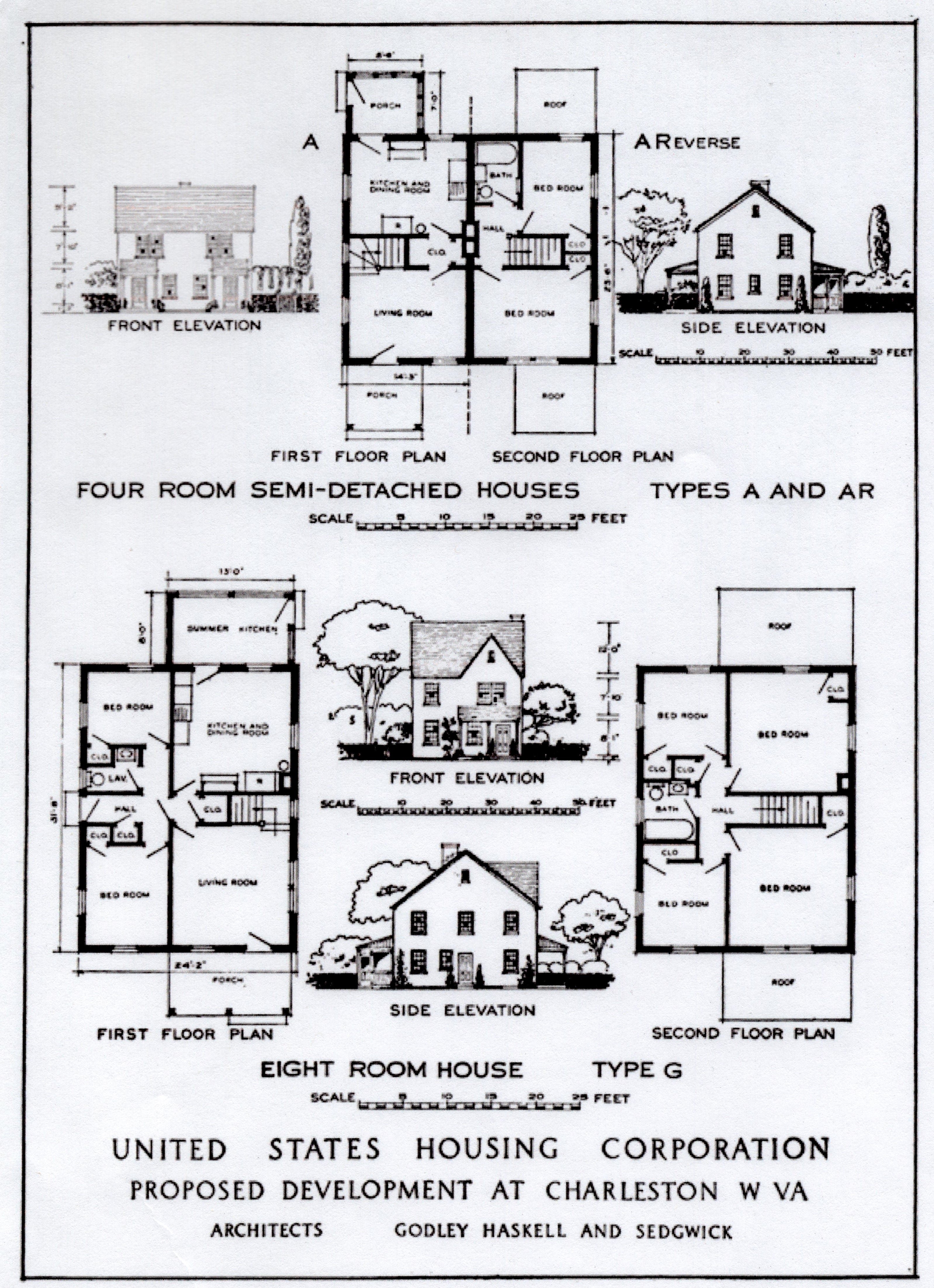 A 1920 advertisement touting the economic prospects of Nitro and the Kanawha Valley. The Ordnance Plant is listed, along with most of the other major industries of the area--many of which were involved in both World Wars. 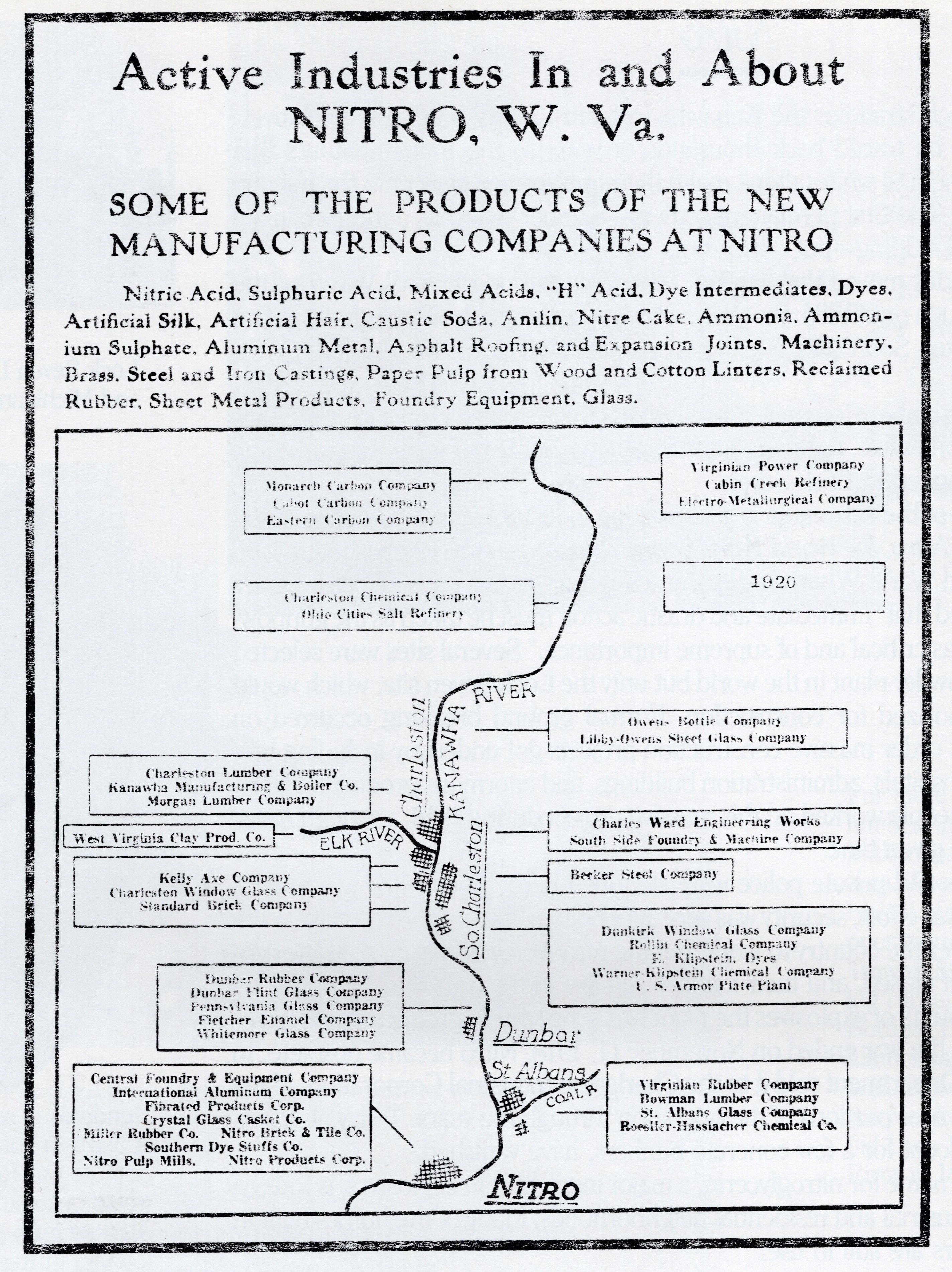 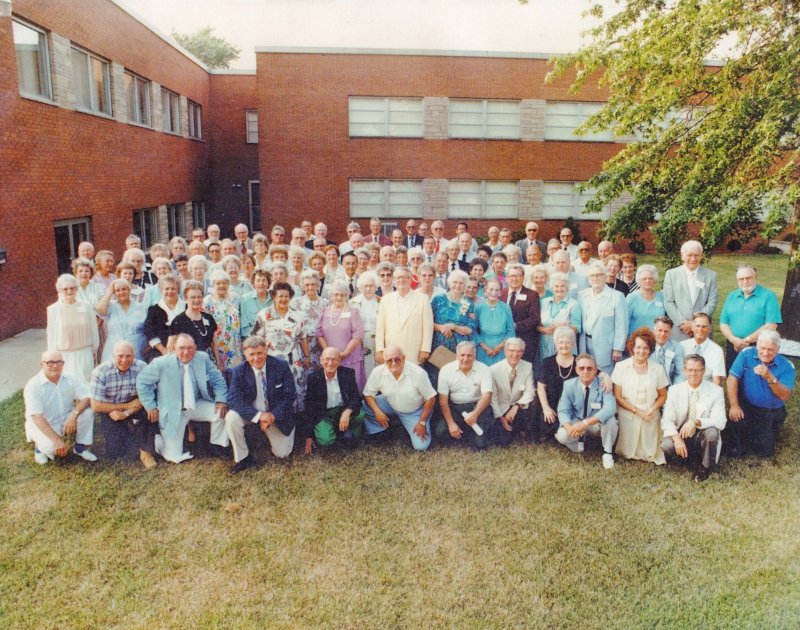 When World War I broke out in Europe in 1914, the United States remained diplomatically neutral. President Woodrow Wilson’s isolationist policies reflected the popular sentiments of the nation, though American exports and bank loans favored the Allied British and French. Sentiments slowly began to change, however, as pro-Allied propaganda of German atrocities in Belgium, and the sinking of the passenger ship Lusitania by a German submarine in 1915 began to align American opinion with the Allied cause. Political and business interests began to recognize the unpreparedness of American armed forces to wage a large-scale international conflict.

Thus in 1916, when Congress voted to provide funds for the construction of a government-owned armor and projectile plant, the Charleston Chamber of Commerce jumped at the chance, offering 205 acres free of charge for the endeavor. The resulting U.S. Naval Ordnance Plant (often known as the Charleston Ordnance Plant) began construction in 1917, but by the time it was finished it was no longer in Charleston; the donated land lay across the Kanawha River from West Virginia’s capital, in a sparsely-populated settlement of 2,000 people (Charleston itself had roughly 40,000 residents) that had steadily grown from humble beginnings in 1906. The city of South Charleston was incorporated by a special West Virginia state charter in 1919, while the Ordnance Plant and some of the surrounding facilities were still being built.

South Charleston was an ideal place for the massive facility (one building of which is more than 900,000-square feet), located near ample supplies of coal, oil, clay, natural gas, and the budding petrochemical industry. The Ordnance Plant, however--along with the nearby ammunition factory in Nitro--would require thousands of workers the local area could not supply, as many of the existing industrial enterprises in the Kanawha Valley were also essential to the war effort. With the inevitable influx of workers, “it being evident that there would not be by any means sufficient housing for its prospective employees, the Navy Department called upon the Housing Corporation…[to provide] housing in connection with this plant.”1

The United States Housing Corporation was a newly-minted Federal agency designed to handle governmental needs of this sort, though it would pass out of existence like many other such agencies created specifically to enhance America’s response to the war. Since the plant itself did not require all 205 donated acres, the Housing Corporation elected to build the workers’ new homes adjacent to the plant. It allowed the employees to walk to their place of work, and was near existing transportation to Charleston and the Kanawha Valley, though the Corporation helped the local trolley company obtain more cars to meet demand.

Upon seventeen acres in two parcels near the plant, homes for 85 families were constructed--all two-story structures, ranging in size from five to eight rooms. The two parcels soon became known respectively as Armor Park and Bungalow Park, with the former being located north of MacCorkle Avenue on the site of the present-day Riverwalk Mall; the latter was south of MacCorkle Avenue adjacent to the plant.

The Ordnance Plant did not manufacture its first weapon until 1921, three years after World War I ended. It was soon manned only by a small skeleton crew, and its fate was heavily debated by Congress over the following two decades (at least one of West Virginia’s own Representatives wished to sell it, citing the expensive upkeep). The houses of Armor and Bungalow Parks were rented to families in the meantime, but remained government property.

President Franklin D. Roosevelt chose to reactivate the plant in 1939, seeing war break out in Europe once more as Hitler’s armies swept across Poland, Belgium, and France. On September 3, 1940, he personally visited the plant to inaugurate its reopening. Armor and Bungalow were soon bustling with many of the plant’s 7,400 workers (half of whom were women), the majority of which brought families with them. Anticipating this, the development as originally built encompassed a school (Armor Park School, administered by the US Navy), recreation center, park, and pool. Military Police patrolled the area to keep the plant safe from enemy sabotage, and city police had no jurisdiction within the housing developments themselves.

Great care seems to have been put into the construction of the developments, as the Housing Corporation’s only official regret in its 1920 report to the Department of Labor was that “the first impression which the houses give is that of too great similarity and a certain barrenness. Had there been a greater variety of types and color the appearance would have been improved.”1 Later recollections from residents were largely positive, and a reunion was held in the 1980s to celebrate their collective experiences living in Armor Park from 1940-1946.

Wartime residents were given ninety days to vacate in 1946 so the homes could be given to returning veterans. Unfortunately, no trace of the homes, school, pool, playgrounds or sports fields remains. Armor Park was later destroyed to make way for the Riverwalk Plaza shopping center, and further developments replaced Bungalow Park. The Ordnance Plant, however, and nearby Depression-era Oakes Field, remain to testify to South Charleston’s tremendous role in World War 2. Nevertheless, Armor and Bungalow Parks represented a watershed in South Charleston’s development, leading to a surge in population, infrastructural development, and industrial capacity--the legacy of which would sustain economic momentum in the Kanawha Valley for decades to come.