This marker, erected in 2009 by Pennsylvania Historical & Museum Commission, was placed to show the spot where Milton Hershey opened his first candy store. Mr. Hershey opened his first candy business here on June 1, 1876, at just eighteen years of age. He did not only sell candy here, he also sold an array of fruits, nuts, and ice cream. At first this store was profitable, but eventually due to credit issues the store closed. It was only after this first failure that he opened the Lancaster Caramel Company and then Hershey's Chocolate Company as a subsidiary of that.

This is the Historical Marker that was erected at the site of the First Candy Store owned and operated by Milton Hershey. 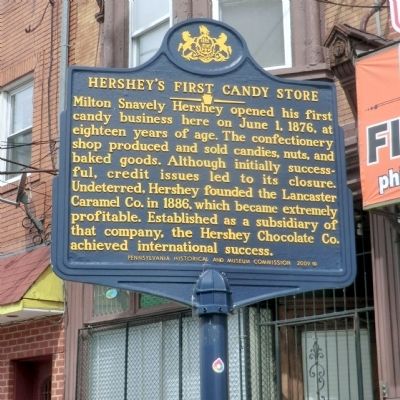 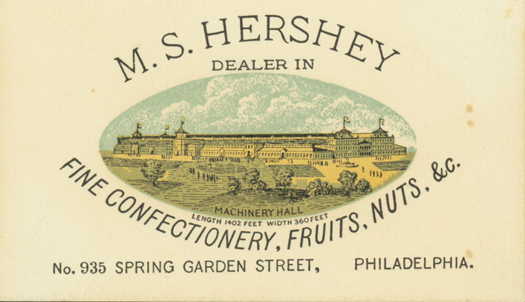 Milton Hershey completed an apprenticeship with a Lancaster confectioner when he was 17 and decided soon after that he wanted to open a candy shop of his own. He traveled to Philadelphia, Pennsylvania in May of 1876 to look for a storefront he could rent for his new business. He did so in Philadelphia because he did not want to compete with his teacher as well as the fact that this was an important year for the city. The city was hosting an international exposition celebrating the nation’s centennial anniversary and was hosting the nation’s first world fair.  Hershey eventually found a nice store that was along the main pathway of Fairmount Park and the Centennial Exposition.

At the beginning, this shop was turning a profit. As the business expanded, however, the shop became too small and a few short years later he had to move to 925 and 927 Spring Garden Street. He also had to establish a separate wholesale business at 532 Linden Street. Milton, as well as his family members, worked such long hours at the store, and many nights did not even go home.

However, Hershey did not concentrate on one product. He tried to keep a variety of goods to appeal to everyone including fruits, nuts, and ice cream. This became a problem for Hershey because the confectionary competition in Philadelphia was fierce. He had a strong product line but the volume of candy he produced was too small to make much of a profit. He did not own the equipment nor did he have a large enough staff to mass produce or distribute enough candy to make a profit out of these goods. Even though his production could keep up with sales he was not able to earn enough to keep up with his bills. The sugar dealers that supplied his ingredients had to have cash payments while his wholesale customers wanted credit and were slow to pay him back in cash. He soon fell behind in his payments and was afraid of the suppliers cutting off his supply of raw ingredients.

In 1881 his father came to help him. Henry Hershey worked for his son peddling candy to help him make a good start. He was a man of both imagination and action and once told his son “if you want to make money, you have got to do things in a big way. To help his son’s business he designed a new candy display cabinet and developed a formula for cough drops. These were even featured in the 1890 December issue of the Confectioners Journal.Trying to please everyone, however, spread Hershey’s resources too thin, pushing him farther into debt until he collapsed into bankruptcy.