The location presented below is the Enrollment Services building, it is where the office of Dr. James Fisher, former President of Towson State College was located during the 1960’s and 1970’s and where the first ever, Occupy Towson took place headed by the Black Student Union (BSU). It is now a site for incoming, current, and former students to deal with student affairs such as transcripts, class registration, financial aid, and so on. The Enrollment Services is comprised with a series of offices that include the Bursars Office, English Language Center, Financial Aid, Graduation Office, Occupational Therapy and Occupational Science Department, Payment Center, Property Records, Records, Transcripts and Registration, Reenrollment, Registers Office, Residency, and Veteran’s Affairs.

This article is from the Towerlight, outlining the details of Occupy Towson, a historic event for the African American community on Towson University 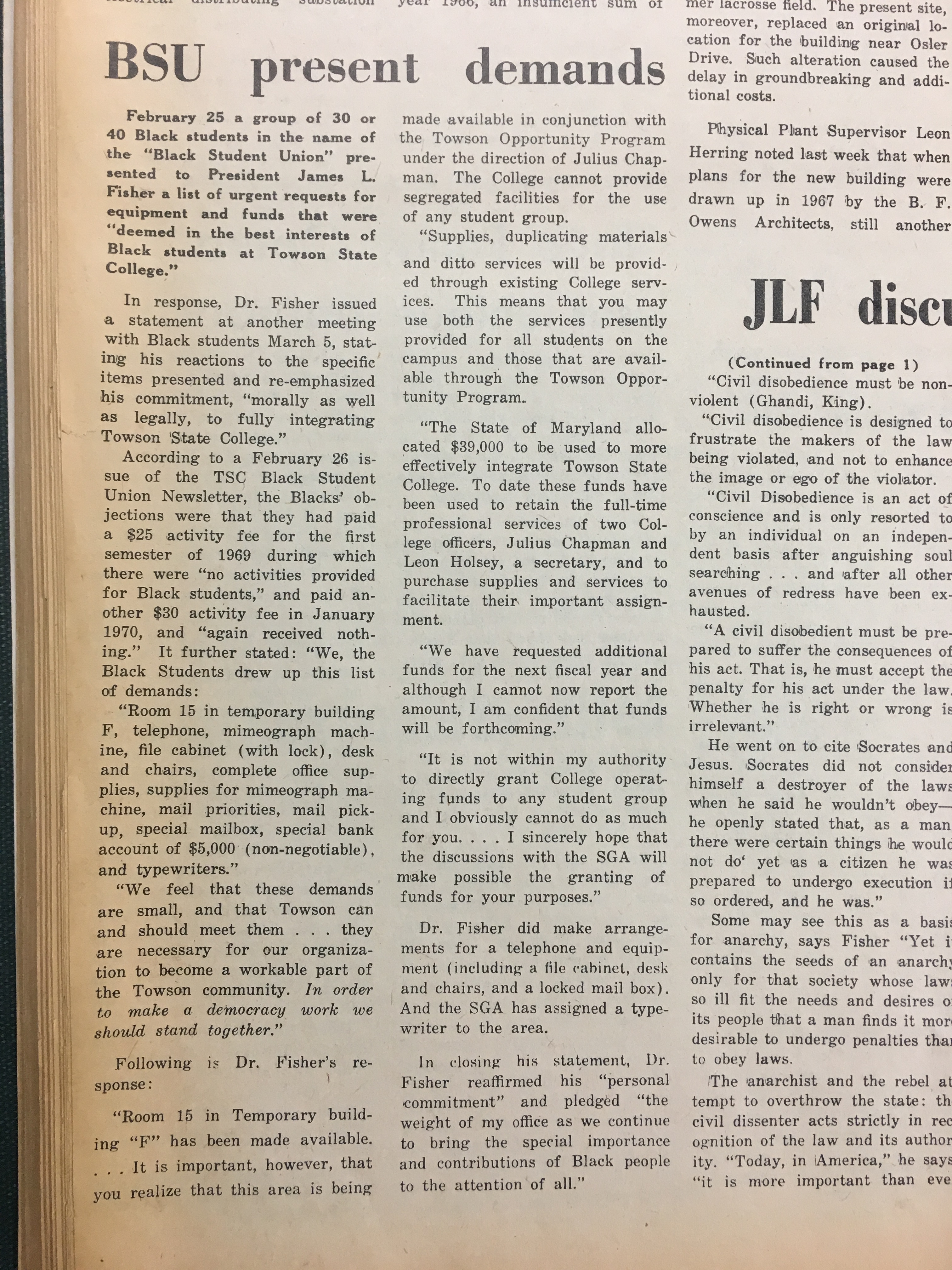 The Enrollment Services building is a pivotal sight for the history of African American students at Towson University. It symbolizes one of the first acts of civil disobedience the BSU organized. BSU was an organization that sought to create a safe environment for young black men and women to come, collect, re-cooperate, and strengthen. The BSU office was especially necessary during the upheavals of the 1960’s and 1970’s, where such a space was necessary to the preservation of the black students.

On February 25, 1970 the BSU with a group of 30-40 African American students marched into Dr. James Fisher’s office with a list of demands addressing complaints that many of the students shared. The overall consensus was there was a lack of activities presented for African American students on campus even with them paying semester activity fees. The list of demands included, a room for black students to gather, a telephone, mimeograph machine, mail priorities, mail pick up, special mailbox, typewriter, and a special account of $5,000. In response Dr. James Fisher allocated a room with the condition it not be segregated. He provided them with a telephone, desks, chairs, and a file cabinet. In his approval of the money Fisher noted that the state had given funds to the college to work towards the integration of races, but he didnot provide any ample explanation as to how the funds have been used to integrate said students. He also noted that he regrettably could not give students groups money but he pledged “to bring the special importance and contributions of Black people to the attention of all”.

This tour combines four locations that represented "safe havens" for different groups at Towson University in the 60s and 70s. The Stephen's Annex, which is where the Women's Center Board was located, was a space for all women on campus. The Black Student Union Office was a space for all black students at Towson. The Lacrosse Field represents a safe haven for Towson's students in sports. Lastly, the Enrollment Services Building was where black women students at Towson had a sit in for their rights.