In 1916, the Paul Litchfield of Goodyear Tire & Rubber Company purchased thousands of acres of land. The area is known as Litchfield Park for this reason. The company used these acres to produce long-staple cotton for their tires and Litchfield Park became the headquarters of all the Goodyear Farms operations throughout Arizona and one of the largest company towns in the Southwest. The company recruited approximately 2,000 men from Mexico in 1916 to help clear and till the land, dig the canals, and plant hundreds of acres of cotton needed for large-scale agricultural production. The small community that formed as a result of the Goodyear Farms cotton industry first became known as "Egypt" for the Egyptian cotton grown there and then, finally, was called "Goodyear."

Goodyear Farms circa 1940-notice the cotton gin in the background 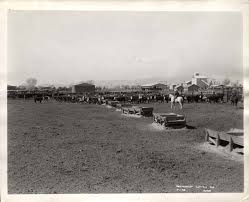 Until 1928, men, women, and their families lived in tents and adobe houses built on Litchfield Park's original city blocks. Over time, the "camp" and its communities were moved to the outskirts of town.
Segregation limited housing options and access to its public facilities. During WWII, when hundreds of men joined the armed services, the women from the camps temporarily took over the responsibilities and duties previously held by men at Goodyear Farms, enabling the company to remain in operation.

Today, physical evidence of the camps no longer exists. In 1986, Goodyear Farms closed its operations and demolished the last of the camp structures, making way for new housing and economic developments.