This 1920s Late Craftsmen Style bungalow, located in the historic Black neighborhood of Washington Park in Mesa served as the residence and medical office for Dr. Lucius Charles Alston. Alston became the first African-American physician to practice in Mesa and despite a climate of racial segregation, Dr. Alston provided medical services for African Americans, Native Americans, and white residents of Mesa.

The Alston House was placed on the National Register of Historic Places in 2012. 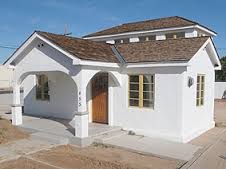 The Alston House after renovation, 2008.

Dr. Lucius Charles Alston grew up in North Carolina and moved his family to Colorado around 1920.  Dr. Alston and his family moved from Colorado to Mesa, Arizona, in 1929. Their relocation from the southern United States to the Western United States can be characterized as part of the "Great African-American Migration," a mass population shift of African-Americans from the rural South to northern industrial and urban towns and westward during and after World War I.   African-Americans moved north to escape economic stagnation in the South; the need for industrial laborers in the North during World War I enabled African-Americans to join a more prosperous workforce in urban northern and western cities.  Although Jim Crow laws and culture persisted throughout the United States, African-Americans sought new lives in the North and West away from deep-seated Southern oppression, lynching, educational inequalities, and denied voting rights.

Despite the educational, economic, and political difficulties faced by African-Americans at this time, Dr. Lucius Charles Alston received his medical degree in 1918 from the University of West Tennessee and served as a Private First Class in the United States Army’s 802nd Pioneer Infantry during World War I.  Although many Black doctors chose to practice in the South due to its large population of African-Americans, Dr. Alston and his wife, Velma, who was a nurse, moved to Mesa, Arizona, in 1929 to establish a medical practice.  Dr. Alston purchased the house at 453 North Pima Street in the Black neighborhood of Washington Park to serve as his residence and office location.  Racial segregation and discrimination marked the communities of Mesa, as the African-American population were required to live in the Washington Park district, also known as “Northtown” by the Black community since the area was just north of the Mesa city limits.  Dr. Alston provided services to people of all races and ethnicities and was revered as one of the best doctors in Mesa.

The original 973 square foot portion of the Dr. Lucius Charles Alston House was built in the 1920s, with the 312 square foot second floor addition dated from the 1940s based on building materials.  Dr. Alston’s granddaughter, Vivian Clark, deeded the property to the East Valley Habitat for Humanity in 2001.  The City of Mesa acquired the lot in 2007 and restored the Alston House by 2010 with funds received from a grant from the Historic Preservation Heritage Fund. Currently, the home serves as headquarters and shared administrative offices of the Mesa Association of Hispanic Citizens (MAHC) and Dr. Martin Luther King, Jr. Celebration Committee.

Christensen, Stephanie. “Great Migration, The (1915-1960).” Black Past Online Encyclopedia. Accessed October 11, 2014. http://www.Blackpast.org/aah/great-migration-1915-1960. This encyclopedia entry focuses on the Great Migration of African-Americans from the South to the North and West during and after World War I. Christensen discusses the migration over multiple periods: the first migration during World War I, the second during the 1920s, the third during the 1930s, and the fourth between the 1940s and 1960s. She discusses the reasons for the migration, as well as, the impact of the increase in the African-American populations in the North and West. "Great Migration: The African-American Exodus North." National Public Radio. Accessed October 11, 2014. http://www.npr.org/templates/story/story.php?storyId=129827444. This article discusses the Great Migration of African-Americans between 1915 and 1970 from rural locations in the South of the United States to industrial and urban northern and western cities of the United States. This relocation caused large demographic shifts in urban cities, with many cities seeing 30% to 40% increases in the Black population and increases in the numbers of employed African-Americans in industry. This article focuses on Isabel Wilkerson's book, The Warmth of Other Suns, and her research conducted for this book. National Record of Historic Places Program. “Dr. Lucius Charles Alston House, Maricopa County, Arizona.” Accessed October 9, 2014. http://www.nps.gov/nr/feature/weekly_features/2012/Alston_House.pdf. This is the National Record of Historic Places nomination application for the Dr. Lucius Charles Alston House. This document focuses on the history of the home, the life and accomplishments of Dr. Lucius Charles Alston, and the racial and ethnic history of Meza, Arizona, and its neighborhoods. Rutkoff, Peter M. and William B. Scott. Fly Away: The Great African American Cultural Migrations. Baltimore: Johns Hopkins University Press, 2010. In this book, Peter M. Rutkoff and William Scott focus on the West African roots of the southern African-Americans who migrated to the North and West during the Great Migration. They argue that their African heritage, not their agrarian Southern roots, influenced African-American migrations to urban centers. They focus on the African-American culture of four southern regions including the low-country South Carolina, Birmingham, Alabama, the Mississippi Delta, and Houston, Texas to discuss the influence of West African culture in these regions and how this influence shaped the migration of African-Americans from these areas. They use these regions to also emphasize the differences among southern African-Americans and how the Great Migration affected and influenced the social, cultural, political, and economic environments of the North and West. Whitaker, Matthew C. “The Rise of Black Phoenix: African-American Migration, Settlement and Community Development in Maricopa County, Arizona 1868-1930.” The Journal of Negro History 85, no. 3 (Summer 2000): 197-209. In this article, Matthew C. Whitaker discusses the African-American migration, settlement, and influence in Phoenix, Arizona, and its surrounding neighborhoods. Whitaker focuses on the resiliency and agency of the African-American population in Phoenix. He discusses the Jim Crow culture of Phoenix and the ways in which the Phoenician African-American community fought against racial discrimination.