In 1999, the city of Saratoga Springs placed a marker on the Broadway Street side of the city's visitor center to commemorate the location where Solomon Northup was captured in 1841. Northup was an African American man who was born free in 1808 and an accomplished violinist who lived for a time in Saratoga Springs. Northup worked at the Grand Union Hotel in the city and it was here that he was kidnapped and sold into slavery. Northup's story was later recounted in his autobiography, "Twelve Years a Slave" a harrowing tale that introduced many to the horrors of slavery and the realities of life for African Americans when it was published in 1853. The book has been assigned reading in many high school and collegiate courses and was made into an award-winning Hollywood film in 2013. 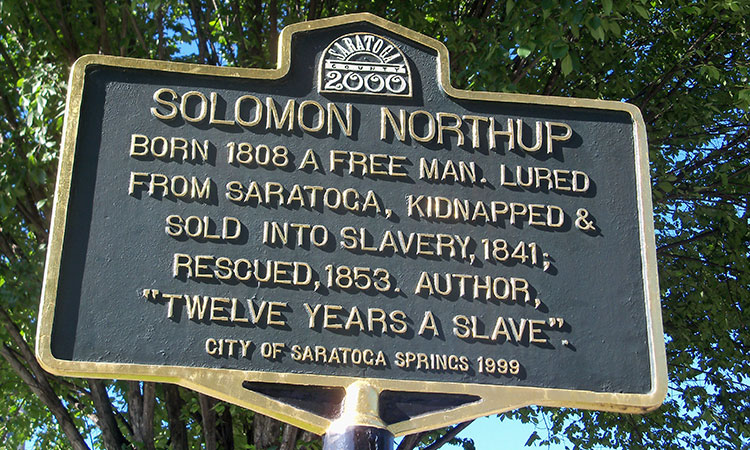 Solomon Northup was born in Minerva, New York, in 1808. His father was a slave who gained his freedom following the death of his owner, but Northup was born into freedom. Northup was skilled as a violinist and earned a living as a musician and from his work in several different hotels.

In 1834, Northup and his wife Anne moved to Saratoga Springs. Northup worked in the Grand Union Hotel and continued to find employment as a violinist, performing at weddings and other events. Because the work that Northup did tended to be seasonal, he was often in search of employment. It was in 1841, while looking for work, that Northup met two white men who offered him work playing the violin in a circus in Washington, DC. He was offered a good wage and the cost of his return trip.

The job offer was a hoax, however, and Northup was kidnapped and sold into slavery. He remained a slave on a Louisiana plantation for twelve years. During his enslavement, he endured beatings and other cruel treatment. He was eventually freed because of the intervention of friends from Saratoga Springs who had learned of Northup's enslavement. Upon his release, Northup, who was literate, published a memoir of his time as a slave, "Twelve Years a Slave," which was adapted into a film in 2012.

In 1999, the city of Saratoga Springs placed a marker at the site of Northup's abduction. The city also celebrates Solomon Northup Day, and several of Northup's descendants have attended the event over the years. Sadly, the last years of Northup's life are a mystery. After 1863, he disappeared from the historical record and there is no known grave site for him.