The First Unitarian Church was constructed under the second architect of the Capitol, Charles Bulfinch. Although praised for its advanced architecture, the church was most known for its social justice advocacy – campaigning for abolition, transforming the building into the Cranch Hospital during the Civil War, and donating their building funds to Chicago after the Triangle Shirtwaist Factory Fire in New York. After 55 years of use by the Unitarian denomination, the building would be transformed into a police court and jail. The building was demolished in 1905.

The First Unitarian Church of Washington, D.C. was known for its "Abolition Bell," made by the son of Paul Revere and with the financial contributions of President James Monroe. 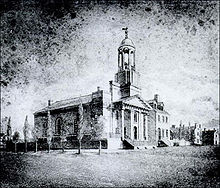 Reverend Robert Little served as the First Unitarian Church's pastor from 1821 until his unexpected death in October of 1827. 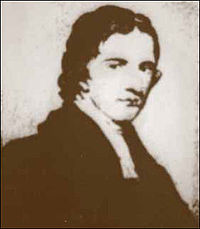 Robert Little, a recent immigrant to the United States, met with several political leaders in hopes of finding a faith paralleling the new democratic functions of the nation’s government. Upon establishing the Unitarian group of Washington, D. C., Little traveled through several New England Unitarian churches, searching for funds to create their own meeting place. Although the idea of campaigning was displeasing to several of the ministers and congregations he visited, Little was able to return with enough money to start the process. Charles Bulfinch, the second architect of the Capitol, designed and administered the construction of the First Unitarian Church. It was located in the Judiciary Square neighborhood, on the corner of Sixth and D Streets NW. At the building’s dedication on June 9, 1822, Revered Little addressed the congregation, saying:

“These walls will, I trust, bear witness that our lives have not been altogether useless to mankind. Some I hope may be better and wiser for our exertions in the cause of truth. If not in an obvious and direct manner, yet in some effectual way may we have served our generation and promoted the knowledge, the service, and the will of the one true God."

In addition to promoting the new democratic functions of the government, the First Unitarian Church was largely known for its social justice advocacy. Reverend Robert Little, the church’s first pastor, was one of the few who spoke out against slavery while it was still legal in DC. Several of the following pastors would follow this practice, including Edward Everett Hale, Samuel Longfellow, Joseph Henry Allen, Moncure Daniel Conway, and William D. Haley. Conway even used his first sermon as the congregation’s pastor to address the church’s role in eradicating slavery. He stated, “The Church must hold itself ready to pass free judgment on all customs, fashions, ideas, facts, on trade and politics, and in this country more especially hold itself ready to give free utterance in relation to our special sin of all sins – human slavery.”

The First Unitarian Church was also known for its aid in several regional medical emergencies. During the Virginia yellow fever epidemic of 1855, several authorities of Washington declared a “Fast Day,” asking God to stop the calamity. However, First Unitarian Church’s Reverend Conway refused to participate. He claimed that the problem did not have religious implications; it was a direct result of poor labor and living conditions in the area. Because of this, the First Unitarian Church instead raised relief funds for those suffering from yellow fever. During the Civil War, several wounded soldiers were being sent to the capital for medical attention. The First Unitarian Church responded by temporarily transformed their building into the Cranch Hospital. Several members volunteered their time to aid the medical professionals involved. Because the church was not able to access their sanctuary during this time, however, they held their Sunday morning services in the US Senate, where President Abraham Lincoln would attend one of their services. This opportunity also granted Conway, their reverend at the time, to be the head chaplain for Washington D. C.’s largest hospital and later the chaplain for the House of Representatives.

Since its construction almost 60 years before, the congregation of First Unitarian’s Church had significantly grown. The building was no longer sustainable for them. However, because of the way the city had grown and the state of the building, it was proving tirelessly difficult to sell. The church had donated all their funding for a new building to the victims of the Chicago Shirt-Waste Factory fire. This led them indebted to the selling of their first location. After a significant period of waiting, the church proposed that it be bought by the taxpayers of the District. The subsequent litigation to transform the building into a local police court and jail proved so complicated, it went to the Supreme Court before being approved for sale. The First Unitarian Church would change its name to All-Souls Free Church Unitarian, remaining a prominent religious influencer in Washington D. C. today, but their first building would only remain under the police’s administration until its razing in 1905.