The Three Affiliated Tribes Museum is a Native American history museum located in New Town, Maryland, and which resides on land that is a part of the federally-recognized Fort Berthold Reservation. It is a “museum that serves as a heritage center to display and preserve history and culture of the Mandan, Hidatsa and Arikara people” (1). In the museum can be found various displays and artifacts, as well as pictures and other information relevant to the history of these three tribes throughout the past several hundred years. Additionally, a gift shop is located inside where arts and crafts made by people of the tribes are sold to the public. Importantly, the Three Affiliated Tribes Museum represents a concerted effort by the Native Americans to retain part of their culture and way of life amidst European expansion into their lands and the oppression they experienced as indigenous peoples.

Here is seen one of the large rooms inside the Three Affiliated Tribes Museum, where many of the displays and artifacts are visible. 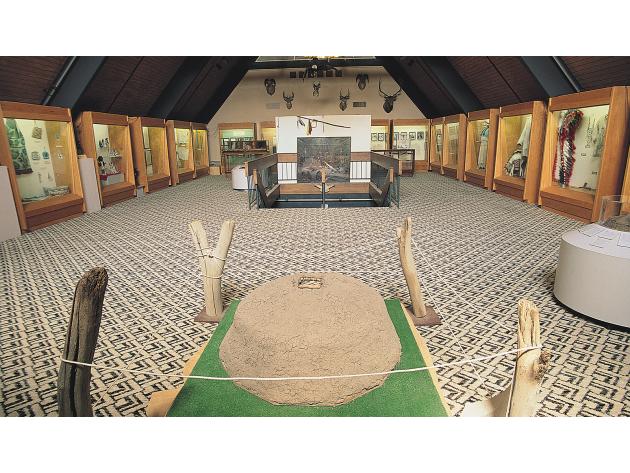 It is well known that history did not favor the Indians when Europeans arrived on their lands, seeking new territory and fortunes. These peoples were seen as obstacles to the white man’s aspirations and ambitions, and were repeatedly driven away from their homeland across the continent, and eventually, either culturally assimilated or almost entirely exterminated. Fortunes were no better for the Mandan, Hidatsa, and Arikara peoples, whose land originally ranged from North Dakota to western Montana and Wyoming. Many treaties were erected with the United States, but time and time again these treaties were broken as legislation such as the Dawes Act permitted the encroachment of settlers on these natives’ land. In 1851, the Fort Laramie Treaty granted the tribes almost 12 million acres; from 1870 onward the reservation was created which retained only a fraction of the original acreage granted to them. Today, the Fort Berthold Reservation, an unfortunate product of colonialism, encompasses approximately 1 million square acres of land in northwestern North Dakota, with a population of 15,309 tribe members as reported in March of 2016 (2).
Historically, the Mandan established a settled, agrarian culture and lived in villages made of round earth lodges that were traditionally 40 feet long. They traded with other Indians and the white men, and farmed various crops for survival such as corn, pumpkin, and tobacco, and also relied heavily on the hunting of buffalo among the plains. The mandan people were quite artistic and creative, creating “pottery, baskets, and painted buffalo robes depicting the heroic deeds of the tribe or of individuals” (3). The Hidatsa were similarly agrarian, and raised crops to eat, but lived in semi-sedentary villages instead, moving only occasionally. They relied more heavily on militarism, where it was more central to the structure of society. The Arikara “came from the prehistoric mound-building societies of the lower Mississippi River Valley” (4) before migrating to the northern plains. They were also semi-sedentary and relied on farming and hunting bison. One of the most important item in their culture was the sacred bundles, which were seen as connections to the gods, being central to activities of the villages that communicated with their creators through the bundles. All three tribes spoke in versions of the Siouan language, and practiced religion involving the Sun Dance, a major ritual entailing long periods of preparation, sacred vows, prayer, and self-sacrifice (5). Resulting from 400 years of peaceful contact and cohabitation in the plains, the Mandan and Hidatsa are most similar to each other, and united with the Arikara around 1862 when their village was relocated near Fort Berthold.
Today, the Mandan, Arikara, and Hidatsa peoples that live on the Fort Berthold Reservation are organized under the operation of the Tribal Business Council. The council is made up of 6 representatives and a head chairman, whom all meet once a month to talk about current events and governance of their people. Membership in the three tribes is dictated by a minimum qualification of 1/8 tribal ancestry, and a minimum of ¼ ancestry to hold a position of elected office. The reservation is thus united in its independence from the United States, and the citizens of the tribes have the freedom to enjoy the their unique culture and way of life unbothered by outsiders. The museum thus is an erection and representation of the history of their culture as they see it, through the centuries of freedom, oppression, and then freedom once again.

10AM-4PM, Monday through Friday; seasonal operation from May through October