In the quaint, quiet town of Shepherdstown, there is a small park leading a way to the James Rumsey monument: a towering, stone pillar that serves as the reminder of a hidden, yet notorious, inventor. James Rumsey greatly influenced the launch into the Industrial Revolution with his invention of the steamboat, which provided a revolutionary push towards economic expansion. The steamboat would allow American to transport goods in a way that was faster and more reliable than ever before. However, these significant contributions are not credited to its rightful owner. Robert Fulton is recognized by many as the inventor of the steamboat, but Rumsey successfully sailed his invention 20 years beforehand. On December 3rd, 1787, the world’s first jet propulsion system was utilized by James Rumsey on the Potomac River in Shepherdstown, West Virginia. A complication in gaining patents unfortunately jeopardized his well-deserved fame. After New York erected a monument to pay homage to Robert Fulton in 1900. the people of Shepherdstown took action to build the James Rumsey monument.

Depicted here is the monument (the white pillar in the upper right corner) overlooking the Potomac River. The bridge displayed is a railroad connected to Maryland. From the Rumsian Society: https://jamesrumsey.org/the-rumsey-monument/ 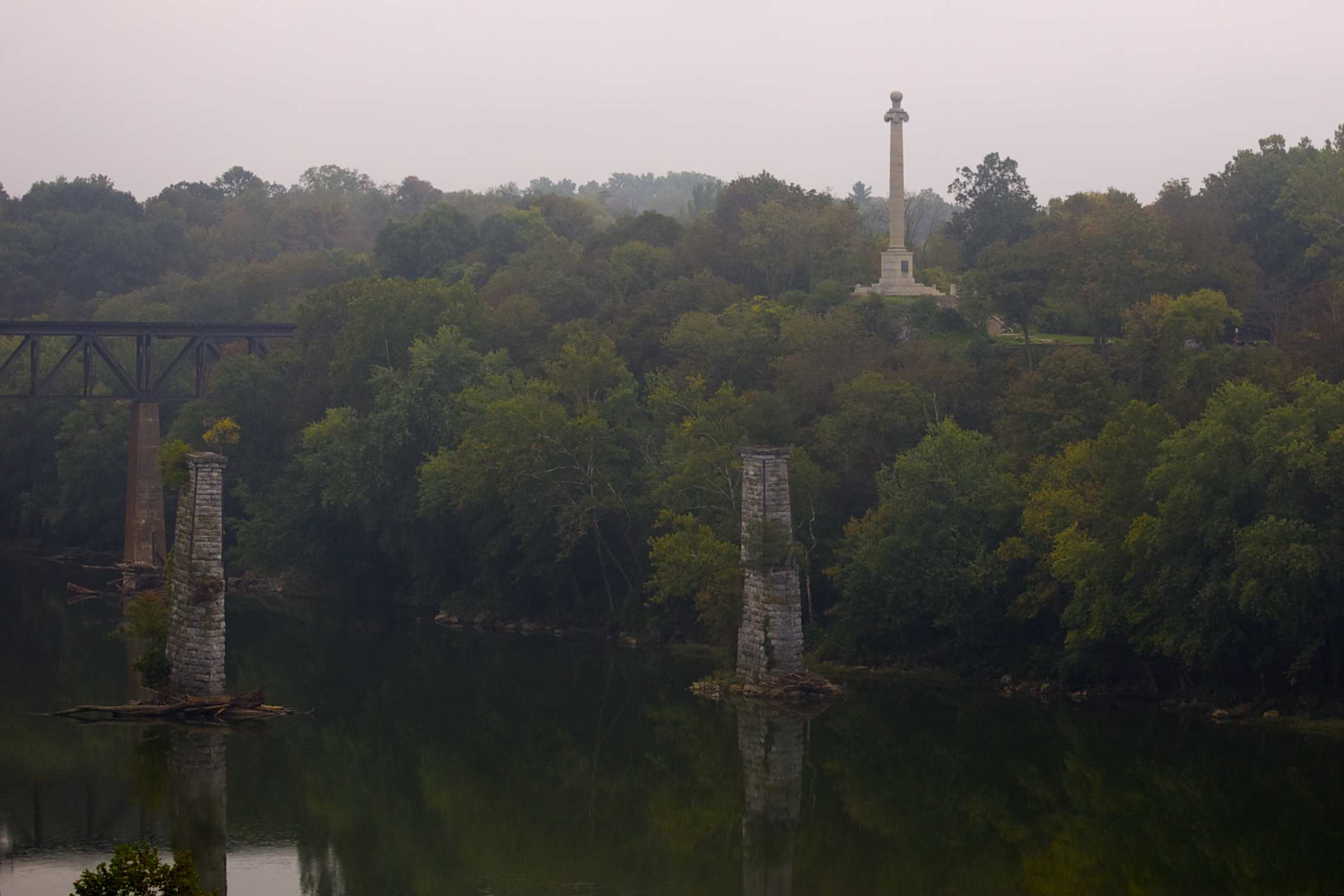 James Rumsey was the first man to successfully sail a steamboat. His invention launched the Industrial Revolution into action. He is depicted here. Business Techonology Source: http://biztechsource.com/justjefferson.com/10Rumsey.htm 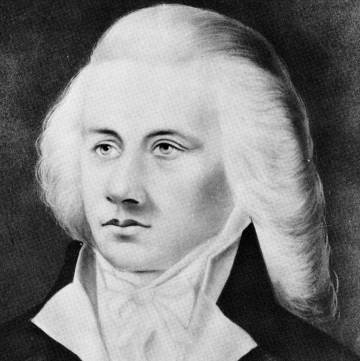 This is the Rumsey monument in vivid detail. It towers up into the sky, and can be viewed by walking up stone steps. On the bottom of the monument is a plaque, stating when James Rumsey sailed his steamboat. Taken by citizen: https://www.flickr.c 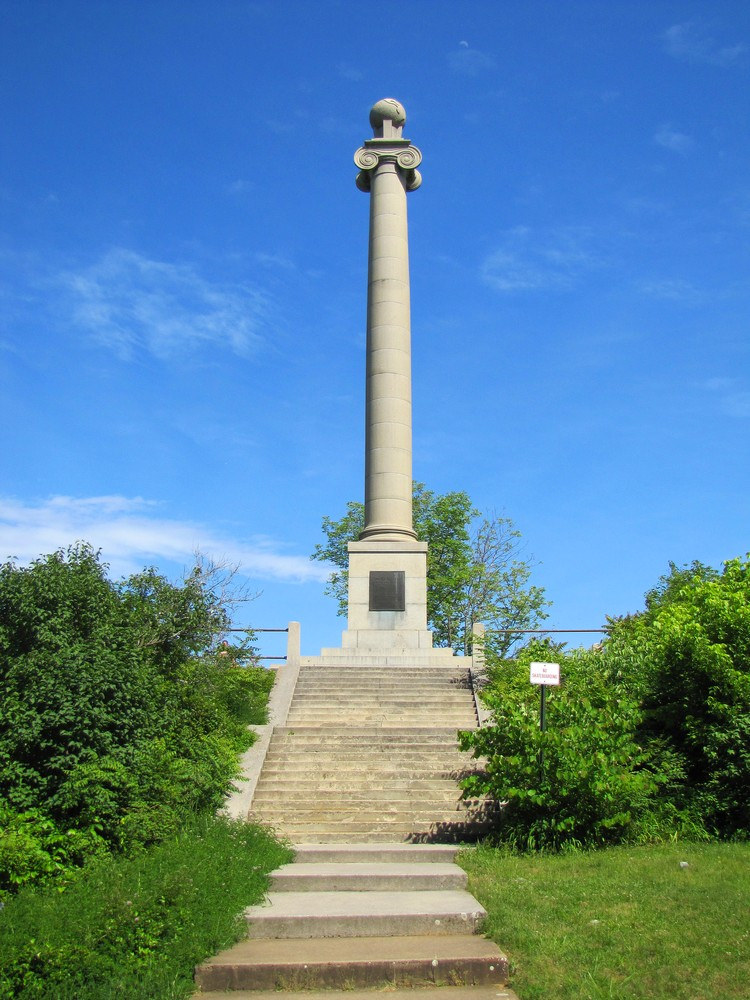 In the years leading up to his water-transportation invention, Rumsey fought in the American Revolution as a patriot. He then worked as a Blacksmith in Virginia, as well as a builder. Upon assisting George Washington in the building of his home, Rumsey spoke of his ideas to mechanically power a boat. Washington listened with open ears, and was enthusiastic towards his plans because he realized it may be a cheaper alternative to building an entire canal system. He helped Rumsey gain a monopoly on that particular type of sea craft in the state of Virginia, but investors were not impressed. Thus, he moved his craft elsewhere.

After years and years of working on his idea, Rumsey demonstrated his steamboat engine in 1787 on the Potomac River. Its design was highly complicated, and it worked by pulling in water through a pump at the front of the engine and expelling it from the stern. This created a jet stream which pushed the boat into motion. The demonstration was successful, besides an inquiry of increased speed from potential investors. Rumsey’s invention had begun to gain attention from more important figures, including Benjamin Franklin. Franklin and several other members from the American Philosophy Society formed the Rumsian Society, which would financially support Rumsey’s trip to England to obtain patents for not only his boat, but his several other inventions.

While there, the US Constitution was created in 1788. It moved patent authority from the state level to the federal level, which made the patent process become on hold for almost two years. Rumsey struggled to gain a patent for his steamboat engine, and only received four for his other inventions. Discouraged, Rumsey could no nothing but wait. He wrote a letter to Thomas Jefferson, who was in Paris at the time, asking him to shed light on the issue taking place in America with patent rights. In 1790, the patent process would open up once again and Jefferson would return home.

On reviewing the many steamboat patent applications, Jefferson found himself frustrated at how long the patent process, set in place by Congress, took to complete. He also was not a supporter of monopolies controlled by patents, and had never felt the need to obtain a patent for his own inventions. Not only this, but the patent process placed emphasis on the “true” inventor; the man who had come up with idea before anyone else, rather than the man who delivered a working invention. This created complications for Rumsey because the various applicants would attempt to prove themselves as the first. Included in the list of applicants was John Fitch, an inventor who was found snooping around in the town of Shepherdstown near the time of Rumsey’s demonstration.

In the end, Jefferson granted a non-exclusive patent to all of the steamboat engine applicants. This provided no advantage to any of them, and was a decision made out of exhaustion. Rumsey’s plethora of inventions (including the boiler, piston-pump, and water jet-drive) were many years ahead of his time, yet he received no solid recognition. The people of Shepherdstown were displeased by this outcome, and constructed the James Rumsey monument in the early 1900’s. The monument overlooks the Potomac River, where Rumsey awed the world with the first steamboat engine. After climbing a fleet of stone steps, one can view the bridge connecting Maryland to West Virginia. A park is nestled in the woods beside the monument where kids can enjoy themselves on the playground. Although the park is discrete, it is a popular place for locals to view beautiful scenery and relax with nature.

James Rumsey died in 1792 after suffering from a stroke. He is recognized by three of the Founding Fathers: Thomas Jefferson, George Washington, and Ben Franklin. Although he was not given the credit he rightfully earned, his memory lives on within the town of Shepherdstown and among historians. His invention of the steamboat engine laid a foundation for many inventors to come. It expanded America by allowing easier means to deliver mass-produced products and alleviated the use of manpower. The monument created in his memory still stands tall over the Potomac to this day, and embodies the amount of effort Rumsey put into his craft.

“The Effects of Steamboats on the Industrial Revolution.” Synonym, classroom.synonym.com/the-effects-of-steamboats-on-the-industrial-revolution-12083941.html.

“James Rumsey Biography (1743-1792).” How Products Are Made, www.madehow.com/inventorbios/4/James-Rumsey.html.