On the courthouse grounds in Homer, Louisiana sits a Confederate Monument commemorating the 1,564 Claiborne Parish men who died while serving in the Confederates States Army during the American Civil War. The monument is on the grounds of the Claiborne Parish Courthouse--the only antebellum courthouse in the state of Louisiana that still functions in its original capacity. At the cost of $1,500, both the United Daughters of the Confederacy and the Women’s Department Club put forth a collective effort and together purchased the 8,000-pound monument that also honors the white South's long history of white supremacy and slavery. 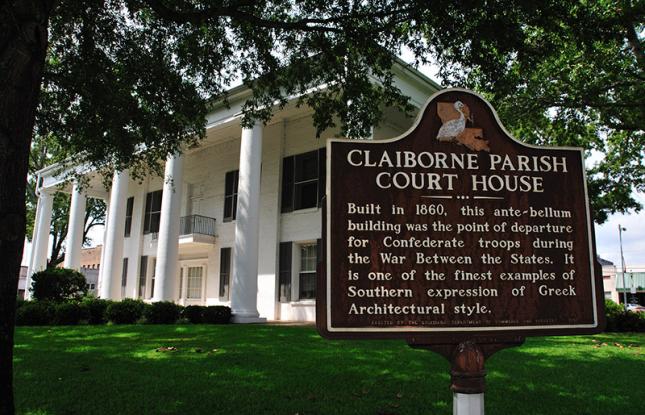 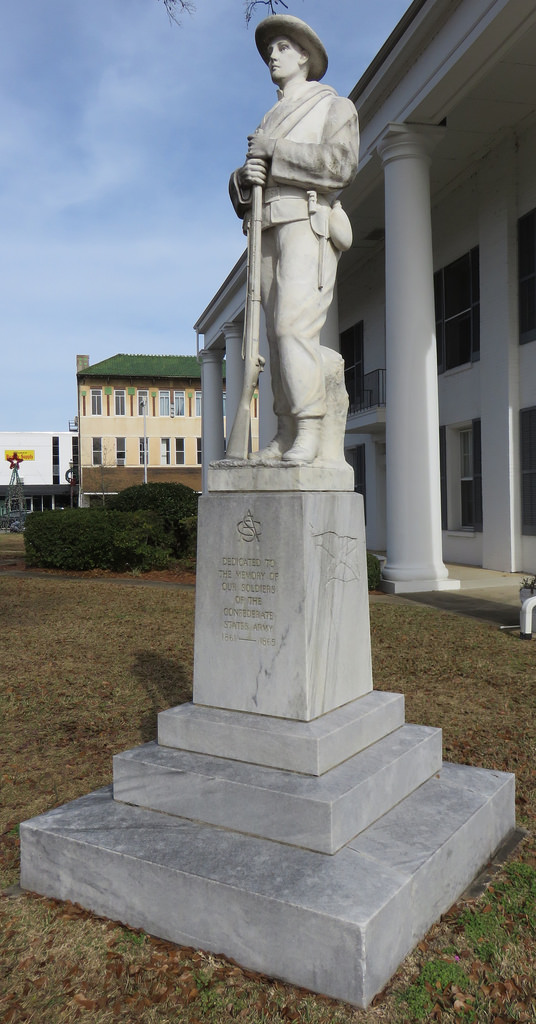 May 30, 1940 marked the unveiling of a Confederate Monument in Homer, Louisiana.  As the Homer School band played “Dixie,” the unofficial National Anthem of the Confederacy, 92-year old J. M. Brooke, a local Confederate States Army veteran, raised the Confederate "battle" flag.  In attendance were local citizens of Claiborne Parish, the Women’s Department Club of Shreveport, Louisiana, and the United Daughters of the Confederacy (UDC).  That day on the Claiborne Parish Courthouse grounds stood an 8,000-pound marble figure casted by a Georgia monument company.  At the cost of $1,500, both the United Daughters of the Confederacy and the Women’s Department Club put forth a collective effort and together donated the full cost of the granite statue.

The monument displays a young Confederate States Army soldier.  He holds his rifle, as the butt of his gun rests on the ground with the barrel pointing upward.  As he looks out, he stands on a columnn that reads “Dedicated to the memory of our soldiers of the Confederate States Army, 1861-1865."  The rear of the columnn reads “Claiborne Parish Veterans with memories shrined in votive stone we have remembered them, erected May 1940.”  On both sides of the columnn there is a Confederate "battle" flag atop a pole.

Although no actual battles took place in Claiborne Parish, more than ten companies of infantrymen enlisted to fight for the Confederacy. Such a large number of military units originating from the same parish indicates that either Claiborne Parish was much larger in 1861 and 1862, or that the parish had a much larger population than today.  The units consisted of, but were not limited to cavalry, artillery, medical, and ordnance.  In addition, several citizens cared for sick and wounded Confederate soldiers.

The statue commemorates the 1,564 Claiborne Parish men who died while serving in the Confederates States Army during the American Civil War.  It is befitting that the monument sits on the Courthouse grounds considering the fact that the Courthouse marker reads “the point of departure for Confederate troops during the War between the States.”  The moniker “War between the States” has long been the informal name of the American Civil War given by memorialization organizations such as the United Daughters of the Confederacy.  The moniker suggests, as historian Charles Reagan Wilson has argued, that the UDC and other pro-Confederate organizations view the conflict as less than a Southern rebellion, but a war over states’ rights in the American system of federalism.  Completed in 1860, just a year before the Civil War broke out, at a cost of $12,204.36, the Claiborne Parish Courthouse is one of four remaining antebellum courthouses in the state of Louisiana.  Moreover, it is the only one that still functions in its original capacity.  Citizens often tell stories of slaves building the Courthouse, however there was no clear documentation that the stories were factual.

As this student of history walked Homer’s town square and gazed at the monument to gather notes, a retired Claiborne Parish sheriff’s deputy approached, asking questions about wanting the statue removed.  The deputy assured me that no one had ever tried to get rid of the monument, and his action that day even suggests that Claiborne Parish officials would fight such a notion of removing the statue.  No information about anyone or any group attempting to remove the monument or relocate it exists.  Given the overwhelmingly white population of Claiborne Parish and Homer, Louisiana, it seems that no one views the monument as a source of division.  It appears that most of the historic markers, buildings, monuments, and even the Henry S. Ford Museum across the street from the Courthouse, go virtually unnoticed by the majority of the citizens of Claiborne Parish.