Charles P. Adams Hall was built in 1962 to memorialize the founder, and longest sitting president of Grambling State University, Charles Phillip Adams. A major academic building in the center of campus, this building is home to three departments as well as the library. In addition, this building symbolizes the agency of African Americans in the South in relation to their education. 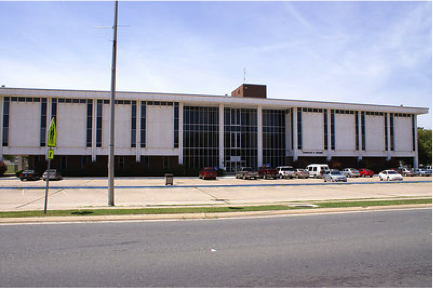 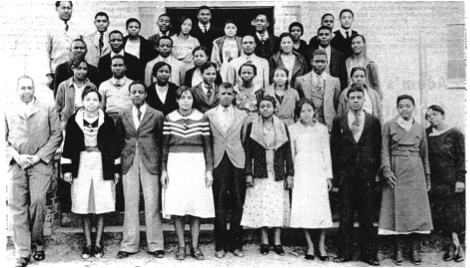 The small, quiet town of working families and students—today known as Grambling, Louisiana—was once a dense forest of sweet gum and pine trees. In 1896, under the leadership of Lafayette Richmond, 1,500 Louisiana ex-slaves formed the North Louisiana Colored Agricultural Relief Association to provide education for Blacks in the South. With the objective to establish an industrial school, they purchased twenty-five acres of land from P.G. Grambling—a sawmill owner in the area, and construction began on the Colored Industrial and Agriculture School of Lincoln Parish. After two terms, the association wrote to Booker T. Washington at Tuskegee Institute in Alabama for guidance and assistance. In response, Washington sent a recent graduate of Tuskegee Institute—Charles Phillip Adams.
Charles P. Adams, a native of Brusly, Louisiana, arrived in Grambling in 1900 at the urging of Washington, the Tuskegee superintendent. On November 1, 1901, under the direction of Adams, with two teachers, the Allen Green Normal and Industrial Institute opened in an effort to meet the expanding needs of Blacks in northern Louisiana. Following the Tuskegee model, Adams advocated for a training school, which taught farming, home improvement, property accumulation, reading, writing, and math. Adams and Washington argued that educational training in such a manner would prove more beneficial for former slaves; it was the means to self-supporting trades and businesses.
By 1928, the school was renamed the Louisiana Negro Normal and Industrial Institution, offering two-year professional diplomas and was recognized as a state junior college. In 1946, the school’s name was changed to Grambling College in honor of P.G. Grambling’s donation of land, which housed the original campus, several miles west of the current campus. Grambling College was accredited in 1949 and by 1974 was renamed Grambling State University (GSU). To commemorate the hard work of the longest sitting president—Adams was memorialized in 1962 with an academic building dedicated to its founder, Charles P. Adams.
However, many of the former Confederate states, and Louisiana included, were celebrating the 100-year anniversary of the Civil War at the same time that a small Black liberal arts college was commemorating its founder--Adams. Contradicting itself, the establishment of the academic building symbolized the agency of the postbellum Blacks population, and their rise out of slavery. The construction of the building on a Black campus was done in honor of the people who built Black education in the South.
Today, Grambling State University is making strives toward becoming a top-tier institution although the school has fallen victim to many set backs, such as flash floods during the spring 2016 term, which affected many buildings on campus including Charles P. Adams. In turn, the building was closed for an academic year.
A major academic area on campus, Charles P. Adams Hall houses the School of Education, the History Department, Department of Social-Work, as well as the Library. Grambling State University is home to over 5,000 students, 500 faculty members, 42-degree programs, an athletic department, and is one of nine universities in the University of Louisiana system. Although no longer an industrial training school, GSU is still providing students with unique educational experiences that began with the founding vision of Black education by Charles P. Adams.