Originally known as Weaver Place, Errolton was constructed in 1854 and is a testament to the mid-nineteenth century transition in architecture that occurred across America. The home was first owned by William B. Weaver, a planter from Culpeper, Virginia. Constructed around a partially burned residence previously on the property, Errolton incorporates elements of both old and new architecture, making it a unique structure that contains elements of both Greek and Gothic styles. The home is listed on the National Register of Historic Places and is still used as a private residence. It is featured in Columbus' annual Spring Pilgrimage, an event that allows visitors to tour historic homes and experience the rich history of the Columbus community.

Errolton as it looked in the 1930s 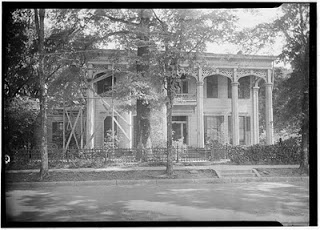 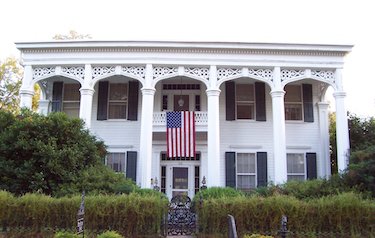 Errolton is a unique historic home located in Columbus, Mississippi. Both the home's architectural style and its inhabitants make it significant, giving it a history that is tied to the Columbus area and the members of the community. The house was built in 1854 and was originally known as Weaver Place in reference to William B. Weaver, the first owner. Weaver came from Culpeper, Virginia and was a wealthy planter. He purchased several properties in Mississippi and became a landowner and businessman after moving to the area.

The Errolton house was constructed in 1854 around the remains of a house previously on the property. Weaver bought the partially burned Alfred R. Wolfington residence in 1853 and proceeded to incorporate what was left of the structure into his new house. Both the dining room and kitchen were saved and worked into the new house, as well as some exterior structures, such as a slave building. Both the original Wolfington house and Weaver Place were built on 16th section land, which was and is owned by Franklin Academy, the first free public school in the state of Mississippi. Because of this, the current owners of the house rent the land the house sits on from the school board.

Erroldine Hay Bateman purchased Weaver Place from the grandchildren of William B. Weaver in 1951. Mrs. Bateman is responsible for the change in name to Errolton, a tribute to her own Scottish ancestry. She is also the person who restored the house after it had decayed after the death of Nellie Weaver, daughter of William. The home has been known to have occurrences of paranormal activity through the years, the most notable being the appearance of Nellie's name etched in a window that was replaced after her passing.

The Errolton home is itself unique because of the way it blends different architectural styles. The home was constructed during a time when American architecture trends were transitioning, resulting in a mix of styles that is seen in only a few houses in the Columbus area. Elements of both Greek and Gothic styles can be seen in the home, a mixture that is interesting and striking. The house maintains a Greek Revival style character, displaying its Gothic influences in the portico's pointed arches. The two different styles come together to form a beautiful structure that is unique in many ways.