Named after a farm owned by a man named Peter Valentine Kolb, the Battle of Kolb's Farm was a Civil War battle that occurred on June 22, 1864. Lieutenant General John B. Hood commanded the Confederate forces who faced two corps of Union troops led generals John Schofield and Joseph Hooker. The battle was one of many in the Union's military campaign led by General William T. Sherman to attack and capture Atlanta. While the Union won the battle it did temporarily halt Sherman's goal of destroying Confederate supply lines.

Map of Battle of Kolb's Farm 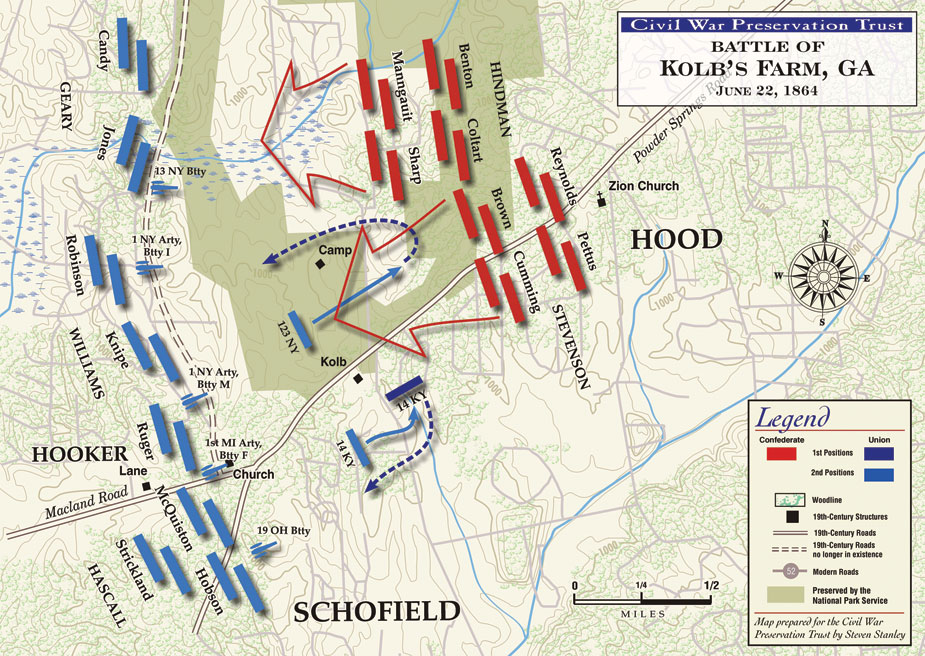 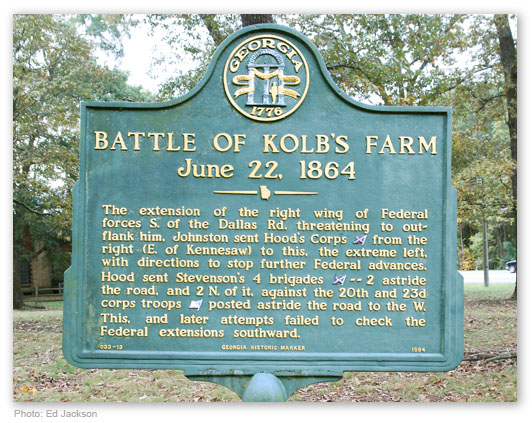 After being appointed head of the Union Army in 1864, Ulysses S. Grant sent William Tecumseh Sherman on a major campaign to take the important Confederate city of Atlanta, Georgia. Along the way, Grant told Sherman to implement total warfare in an effort to destroy the South's ability to make war and to demoralize Confederate troops, even causing some of them to return home. During this campaign, Sherman's forces encountered forces under Confederate General Joseph Johnston.

Before the battle, Johnston withdrew his men to a predetermined point along Kennesaw Mountain and formed a defensive arc to protect Confederate supply lines. Attempting to flank Johnston, Sherman aligned his left wing with Johnston's arc, which freed his right wing up to flank Johnston and harass the Confederate supply lines; however, Johnston quickly got work of this and sent Lieutenant General John Hood to stop the advance.

When Hood arrived, he decided to take the initiative rather than take a defensive position against the Union forces. Upon discovering this, the Sherman's right flank under the command of Union Major Generals John Schofield and Joseph Hooker chose to entrench themselves. Because of this and bad terrain (it was swampy), the Union generals were able to repel Hood's attack while also costing him severe casualties that forced him to retreat. Union

Although the battle resulted in a Union victory, Confederate forces did succeed in temporarily preventing Sherman from reaching the supply lines. Casualties numbered 350 Union and 1,000 Confederates.