The National League Park, better known as the “Baker Bowl”, holds great significance in the history of sport’s in the US. Of great note is the parks strange design compared to most ball parks. Much infamy also comes from the general poor quality of construction of the park, leading to multiple disastrous incidents and the eventual closing of the park. The park is further marred by the poor performance of its home team, the Philadelphia Phillies. Despite much negativity surrounding the park, it can still be fondly remembered for the 1915 World Series and its use by a number of other people for various sporting events. 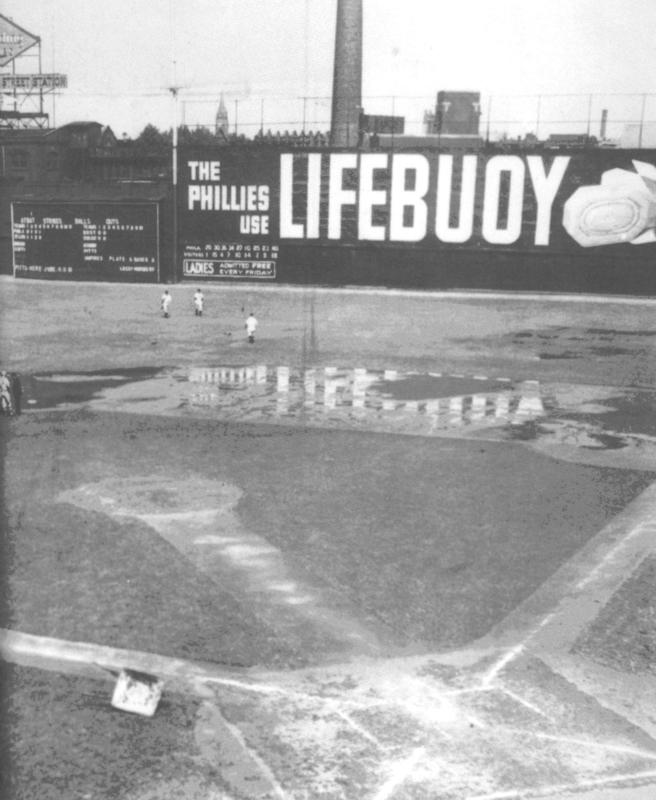 The park was opened on April 30, 1887, costing Phillies owner Al Reach around 100,000 dollars. The initial stadium was able to comfortably accommodate over 12,000 fans (double the number of the previous home of the Phillies). However, the first of a number of disasters to occur happened when a fire broke out in 1894, burning much of the wooden structure of the park to the ground, leaving only the brick exterior intact.

The newly built National Park built in 1895 is considered one of the first “modern” ballparks. This new version held even more fans than the initial design, close to 20,000. The new park consisted mostly of steel and brick, ideally protecting it from the fire that destroyed the first variant. However, while fire may not have been an issue again (or at least not until much later in the parks life), other disasters struck nonetheless.

In spite of the supposed “state of the art” construction techniques and materials used in the Baker Bowl, the material proved too weak and collapsed not once, but twice. In both 1903 and 1927, seating areas collapsed under the weight of patrons. Twelve people died in the first instance, with one death in the second, and numerous injuries. Such notable instances have marred the park's history as an architectural death trap.

Poor construction quality is not the only architectural standout. Of more immediate note is the shape of the park. The right field wall is the main culprit. Left field was around 340 ft from home plate, with the center 480 ft. Meanwhile, the right field is only 280 ft from home plate, resulting in the odd design that spawned the name “Cigar Box”. This design made the park perfect for left handed batters. One such batter was the Phillies own Chuck Klein. In 1930 he had an incredible .386 batting average. He also hit the farthest home run in the Baker Bowl.

Another name commonly used was “The Hump”. This was in reference to the center field of the park. “The center field gap was affected as well (by railroad tracks beneath the ground), slanting upward several feet above the rest of the field’s plain as a result of the underground egress, which ran diagonally beneath the northeast edge of the ballpark grounds.” (thisgreatgame)

While it may have periodically been referred to by other names, the name that stuck was “Baker Bowl”. This is in reference to William F. Baker, the owner of the Phillies from 1913 until his death in 1930. Ironically, Baker was generally derided by many for his poor management of the team. The team dropped greatly in stature under his reign. He was generally focused on the finances of the team, and happily traded away good players for cash. His insatiable penny pinching made him go so far as to use sheep to keep the grass low, rather than pay for lawn mowers.

Almost as important as the stadium itself is the team it is connected to. The Baker Bowl was the home of the Philadelphia Phillies from 1887–1938. They moved to the Baker Bowl from the old Recreation Park. The team’s time in Baker Bowl is not the most celebrated of times. Of course, they may be lauded for the period due to their appearance in the 1915 World Series. However, their luck would run out after this period. The team notably had only one winning season from 1918-1948. A sign of their poor performance during their time at the Baker Bowl is an ad that was painted along the parks right field wall. The ad was for Life Buoy soap, reading “The Phillies use Lifebuoy.” This ad lead to a humorous joke, with some saying “and yet they still stink!” Not only was it stated, a vandal even once painted the statement onto the ad itself.

The most notable event for the park and the Phillies during this time was the 1915 World Series. Several of the matches of the world series took place in the Baker Bowl. This World Series was especially important, as then President Woodrow Wilson was the first President to attend a World Series. Not only did he attend, he even threw a pitch. Additionally, the event was an early appearance of famous ball player Babe Ruth. Ruth was with the Red Sox at the time, and it marked his very first (but certainly not the last) appearance at a World Series. In spite of the larger historical significance, the series was of little note for the Phillies, who were only able to win a single match. Ultimately, they lost the only World Series they participated in during the Baker Bowl era. Due to the poor financial situation of the team (heavily reflective of their generally poor performance), the Phillies were forced to abandon the Baker Bowl in 1938. They would go on to share Shibe park with the Philadelphia Athletics.

The park was even used for sports outside of baseball, with the local Philadelphia Eagles using the field to play football. The owner of the Eagles, Bert Bell, had hoped to use the larger Shibe Park, but could not work out a deal. In the end, the Eagles ended up playing in the Baker Bowl from 1933-1935. In respect to the Eagles, the Baker Bowl is notable as where they began, with their very first game taking place on October 3, 1933. However, their stay at the then deteriorating Baker Bowl was short lived. In 1936, they moved to the substantially larger Philadelphia Municipal Stadium.

The Baker Bowl does have a rather regrettable history. Between various disasters and poor management, the park has a number of reasons to be poorly remembered. However, one should not forget that much joy was brought by this park. Win or lose, sports fans are there to enjoy the game, whether it be baseball, football, or any other game.

Perry, Dayne. 2017. "Just Because: The Ridiculous Dimensions Of The Baker Bowl". Cbssports.Com. https://www.cbssports.com/mlb/news/just-because-the-ridiculous-dimensions-of-the-baker-bowl/.