Battle of Stirling Plantation took place on September 29,1863. The Confedete forces beat the Union troops. It is also known as the Battle of Bayou Fordoche Bridge.

The historical marker dedicated by the Order of the Confederate Rose 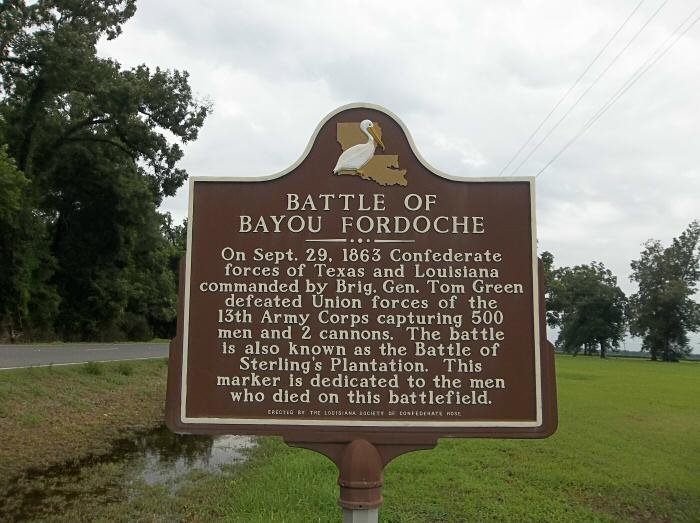 A lone historical marker sitting in Point Coupee, Parish Louisiana demonstrates that the post-Civil War commemoration and adoration of the Confederacy is still alive in the Deep South. The historical marker honors an little known Civil War raid that occurred in 1863 in which a rag-tag group of Confederate raiders ransacked a Union occupation force. It took not 100 years, but more like 142 years for the raid to receive the attention from memorializing southerners. A secretive memorialization society, begun in 1993, called the Order of the Confederate Rose, Louisiana Society worked closely with the Point Coupee Parish Historical Society to unveil the historical marker in October 2005. Perhaps the grous were so eager to place the marker that they forgot to check the spelling of the sugar plantation that once stood at the location.

Louisiana has a very distinctive history and culture, and like many Deep South states, the Civil War and its memory are very important to Louisiana. Many served in the war and many died. Between April 12, 1861 and May 9, 1865, the South attempted to fight toward its independence from the rest of the Union. Louisiana held a special strategic position for both the United States and Confederate States armies. Control of the Mississippi River was paramount in the larger Union strategy, and just nine months after the beginning of hostilities, United States Navy Admiral David G. Farragut successfully defeated Confederate Forts south of New Orleans that eventually led to the capture of the Deep South's most populous and profitable city. While many more battles ensued in Louisiana before the end of the conflict, the state's strategic importance was lost with the city of New Orleans.

During the Union occupation of South Louisiana, General Nathaniel Banks attempted to spread Yankee victories westward to Texas, especially in 1863 after all the fall of the Vicksburg citadel on July 4 of that year. On September 29, 1863 Confederate forces from Texas and Louisiana attacked Union occupation troops as part of the larger Confederate Louisiana strategy of merely raiding groups of Federals, and hampering their supply routes.

Located in Pointe Coupee Parish just west of Louisiana's capital city of Baton Rouge, the Confederates orchestrated a surprise attack on the Union soldiers. Confederate Army General Tom Green commanded and led the surprising raid against Napoleon J.T. Dana's U.S. Army troops. Dana lost nearly all of his 500 men as a result, or were killed in action or wounded, but the lion’s share were captured and marched off to either Nachitoches or the Shreveport prison camps.

While the battle was a resounding success for the Confederate forces of the state, it held little significance in regard to control of the Mississippi River, the city of New Orleans, and its international port. Despite little larger importance of the battle, which is known by its other name The Battle of Bayou Fordoche Bridge, the reason for the marker was placed in 2005 was to honor the Confederate troops that fought for the maintenance of slavery and independence of the southern Confederacy. The Louisiana Society, Order of Confederate Rose created the marker, and unlike many other such monuments to the Confederacy across the South, the twenty-first century memorial group placed the Battle of Bayou Fordoche Bridge long after initial waves of Confederate memorialization begun by more well-known organizations such as the Sons of Confederate Veterans or United Daughters of the Confederacy. The battle commemorated by the marker was neither long nor strategically important, but only commemorates the Confederate raids in attempt to regain access to their economic lifeline- the Mississippi River.

While the Louisiana Society of Order of Confederate Rose is a more recently created memorialization group, its membership list remains a secret. Their website even acknowledges the great movement among Americans over the past 25 years to remove Confederate monuments and to rethink Confederate markers like this one in Point Coupee Parish. The Order's webpage states, ‘’ We take security issues very seriously due to recent events,’’ suggesting that the organization fully understands that their work is controversial in the present day.

While the marker claims to celebrate the fallen soldiers who died, it’s really about the South wanting to maintain a "just cause" for a conflict 152 years since it ended.  The celebrating of the Civil War soldiers began on November 27, 1884 when people in Virginia decided to finance a Robert E. Lee Monument in Richmond, VA.  The United Daughters of the Confederacy wanted to schools to buy their books and teach their kids about civil war and the soldiers who died for fighting.

Fordoche became a village in 1961 and later in 1994 it became a town. The plantation has a lot of sugar cane around it as you can tell that there were probably slaves from that area who were affected by the Civil War. During this time, it was pretty dangerous to be in any parts of Louisiana .

On Sept 29, 1863 Confederate forces of Texas and Louisiana commanded by BRIG gen. Tom Green defeated Union Forces of the 13th Army Corps capturing 500 men and 2 cannons. The battle is also known as the battle of Sterlings plantation. This marker is dedicated to the men who died on this battle field.

8. Karen Lynne Cox, "Women, the Lost Cause, and the New South: The United Daughters of the Confederacy and the Transmission of Confederate Culture," Unpublished Ph.D. Dissertation, University of Southern Mississippi, 1997.