The Ewing-Boone Building, also referred to as the Albert G. Boone Building, is believed to be one of the oldest surviving brick commercial buildings in present-day Kansas City. It was built around 1851 by the Ewing Brothers and later purchased in 1854 by Albert Gallatin Boone; both Boone and the Ewings were originally Native American traders. During the 1850s and 1860s, the building functioned as a crucial supply store for pioneers, trappers, and traders traveling through Westport along the Santa Fe Trail and other routes. The building later housed a hardware store, drug store, and grocery store. Starting in the 1930s, a series of owners began operating a bar in the facility. Today the Ewing-Boone Building is home to Kelly's Westport Inn, an Irish pub and one of the most popular bars in the Kansas City community. The building was added to the National Register of Historic Places in 1959.

Home to the iconic Kansas City establishment Kelly's Westport Inn, this historic building is connected to the earliest days of the city and located near the National Trails System. 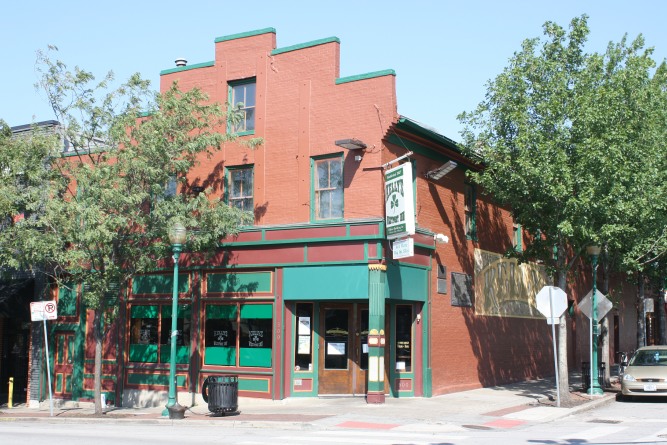 Brothers and Native American traders George and William Ewing constructed this two-story brick building around 1850 as a supply store. At the time, Westport was a major starting point for settlers, traders, and fur trappers heading west on the Oregon, California, and Santa Fe Trails. The Ewing brother’s store provided food, clothing, tools, and other provisions for the wagon trains that came to Westport. Businesses like this were essential to the success of westward migration. In 1854, the brothers sold their store to fellow Native American trader Albert Gallatin Boone, a grandson of famed pioneer Daniel Boone. Boone kept the business in operation for several years and was also a slave trader on the side, although it is unclear whether he ever kept slaves in the building. He sold the store in 1859 and left Westport for Colorado.

During the latter half of the 1800s, the store’s fortunes as a supply shop declined as Kansas City outgrew Westport in importance, and railroads supplanted the old wagon trails. Between the 1880s and early 1900s, the building underwent several major renovations, including the construction of new additions on the southeast and northwest sides. In 1904, the Wiedemann family purchased the store and ran a grocery business in it called the Wiedemann Brother’s Store. They later closed the shop but rented out the building to other businesses for many years. During the 1930s, after the end of Prohibition, the store became a bar called the Wrestler’s Inn. It was notable for featuring live wrestling in the evenings.

In 1947, three former captains of the Kansas City Police Department acquired the bar and rebranded it as an Irish pub called the Westport Inn. One of the bartenders, Irish immigrant Randal Kelly, became a very popular employee among the clientele. By 1977, Kelly and his family had taken over the business, and it was renamed Kelly’s Westport Inn. In 1995, the Kellys purchased the building from the Wiedemann family. The pub remains popular in the Kansas City community and is notable for its live music and extravagant St. Patrick’s Day celebrations.