Queen City Hotel was the center of the African-American business district in the mid-twentieth century. It was also the focus of lodging and entertainment for the African-American community. It was constructed, owned and operated in 1909 by Robert Walker, who was once a slave. The hotel played host to such luminaries as Louis Armstrong, Pearl Bailey, B.B. King, Duke Ellington, Little Richard, and James Brown, as well as many professional baseball players. 15th Street North and 7th Avenue North 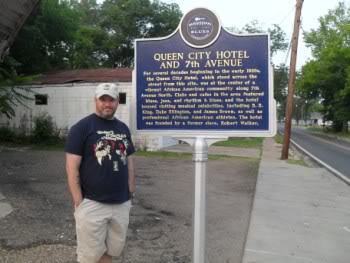 For several decades beginning in the early 1900s, the Queen City Hotel, which stood across the street from this site, was at the center of a vibrant African American community along 7th Avenue North. Clubs and cafes in the area featured blues, jazz, and rhythm & blues, and the hotel housed visiting musical celebrities, including B. B. King, Duke Ellington, and James Brown, as well as professional African American athletes. The hotel was founded by a former slave, Robert Walker.

Seventh Avenue North During the segregation era this area housed many businesses catering specifically to African Americans, including the Queen City Hotel. Hotel founder Robert Walker (c. 1848-1931) had worked previously as a cook and as a “drayman” and “hackman” (horse-and-wagon or -buggy operator), according to census records. The first Columbus City Directory (1912) lists Walker running a boarding house at 1504 7th Avenue North, and by the 1920s the structure was listed as the Queen City Hotel.

In the late ’40s Ed Bush (1908-1982) bought the property from Walker’s estate, tore down the original wooden building, and built a two-story brick hotel. As a young man Bush had worked as a bellboy at the downtown Gilmer Hotel, and with the financial assistance of Gilmer owner J. W. Slaughter he opened businesses including a café, pool hall, dry goods store, barbershop and dry cleaners on Catfish Alley (South 4th Street). The New Queen City Hotel officially opened in 1948.

The Queen City Hotel anchored the Seventh Avenue North district, known locally as “down on the block,” which stretched from 13th to 20th streets and fanned out several blocks in each direction. Locals have recalled nationally prominent musicians including Bobby “Blue” Bland, Little Richard, Little Willie John, Earl “Fatha” Hines, Louis Armstrong, Fletcher Henderson, and Pearl Bailey performing at the Blue Room, operated by Billups Evans at 906 14th Street, and the Savoy, owned by Jim Sykes, at the intersection of Seventh Avenue North and 19th Street. Ed Bush was a member of the leading local jazz and blues band, the Rhythm Kings, which played at venues including the Queen City’s ballroom and also toured regionally to Starkville, Aberdeen, West Point and Okolona. Other local gathering places for dancing or listening to music included the Elks Club, the Deluxe Café, Richardson Café, the Cozy Corner, the Tic Toc 1 and Tic Toc 2, and the Red Rooster, and, in later years, the Flamingo Lounge, Ladies Inn, the Cotton Club, and the Crystal Room.

Seventh Avenue North was one of many African American business districts across the nation that ironically declined after the end of official segregation. In 1996 the Weatherspoon family bought the vacant Queen City Hotel, but despite a campaign to preserve the building, it was demolished in 2007. An informal festival celebrating the neighborhood’s cultural legacy began in early 1980s, and by 2010 the Seventh Avenue Heritage Festival was drawing over 10,000 visitors.