Opened in 1914 to showcase both vaudeville performances and films, the Orpheum Theater replaced an earlier vaudeville theater built in 1904. This theater (also known as the New Orpheum) was designed by Rapp and Rapp, an architectural firm working in and around Chicago during the early 20th century. The Orpheum is one of Rapp and Rapp's earlier designs, but the firm would go on to earn a reputation for building numerous lavish "movie palaces." The Orpheum closed as a theater in 1986 but was spared demolition. It is now the Orpheum Children's Science Museum.

This building was designed by the architectural firm Rapp & Rapp. 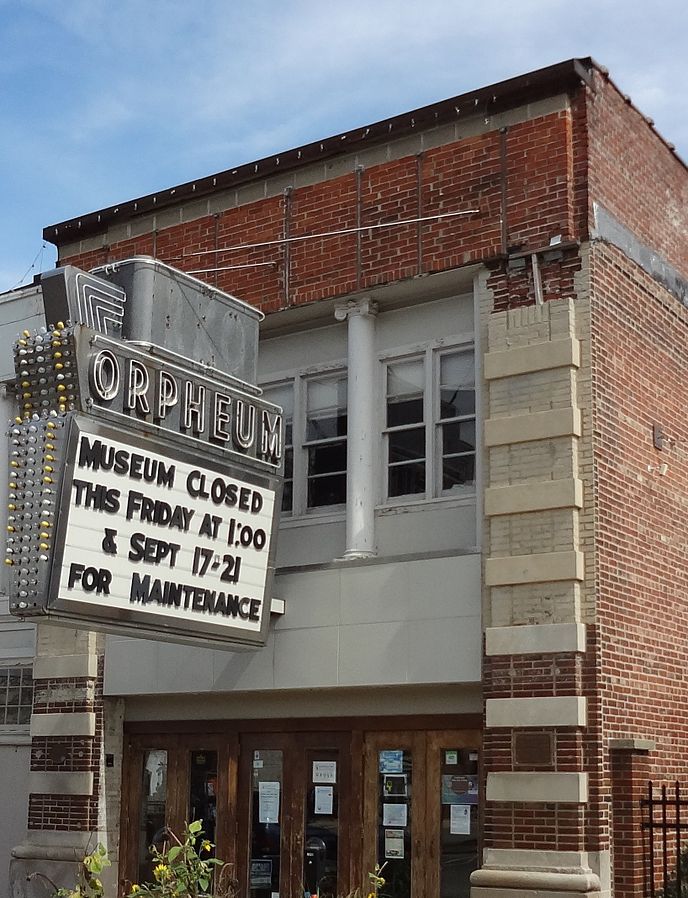 Early History and Design:
A vaudeville venue dating to 1904 originally stood on the site, but it was acquired by Marcus Heiman in 1909 and then demolished in 1909. Heiman said, however, that he would build a bigger theater to replace it. As promised, the New Orpheum opened its doors in 1914. Its design was inspired by the Salle de la Spectacle at Versailles, featuring high ceilings (30 feet in the main lobby and 40 feet in the auditorium), 24 Corinthian columnns surrounding the auditorium, and elaborately decorated loge boxes on the mezzanine. It featured a stage for vaudeville acts as well as a screen for films. Performers such as Bob Hope, Will Rogers, and the Marx Brothers made appearances at the Orpheum.

American Vaudeville:
Vaudeville was a popular form of entertainment from the 1880s to the 1930s. Performers would take turns on stage putting on various short acts: songs, magic tricks, comedy, animal acts, acrobatics and contortion, brief plays, and so on. A typical act might last 5-15 minutes, and an entire show might comprise 13 such acts. Vaudeville comedy often relied on creating and perpetuating ethnic stereotypes (of Italians, African Americans, and others), which remained in the cultural consciousness long after the decline of vaudeville by making the leap into television and film.

These variety shows were popular, in the words of the New York Herald, because they supplied "an entertainment that amuses without taxing. To those whose minds are full of business cares and who do not feel up to following the dialogue and situations of a play which demands a certain amount of intellectual effort, vaudeville is a boon" (1893; quoted in Virtual Vaudeville). Vaudeville was fun, accessible, and made no great demands on its audience.

This form of entertainment has roots in earlier 19th-century performances, such as circus acts, Wild West shows, saloon entertainment, burlesque, and minstrel shows. During the 1890s, producers such as Benjamin Franklin Keith, the "father" of American vaudeville, transformed these kinds of variety acts into something more respectable and family-friendly. He insisted that his performers avoid vulgarity and obscenity, and that audience members refrain from hassling performers or making inappropriate noise. Vaudeville thus began appealing more to a middle-class audience. Vaudeville theaters generally had seating arrangements for a wide range of guests, from more luxurious box seats for wealthy patrons to cheap gallery seating for the working class.

During vaudeville's heyday, most medium and large cities had a dedicated theater, and performers traveled the country from theater to theater, creating a national circuit that was made possible by the expansion of railway networks.

The Orpheum as a Movie Theater:
From the 1920s on, the Orpheum Theater was run by RKO, and films became the chief attraction. The theater struggled somewhat in the 1950s; in an effort to attract more people, RKO enhanced its films with new technology such as Sensurround and CinemaScope. Renovations in the 1960s altered the Orpheum's appearance, including a new aluminum facade. Eventually, in 1986, the Orpheum played its final film, "April Fool's Day."

Current Use as a Children's Science Museum:
Though the City of Champaign planned to demolish the Orpheum to build a parking lot, the Preservation and Conservation Association (PACA) decided to assess the condition of the old building and determine if it could feasibly be restored. PACA volunteers removed the aluminum facade that had been added in 1967. The building opened as a children's science museum in 1994, and was named the Orpheum Children’s Science Museum in 1997. Champaign City Council members unanimously voted it a city landmark in 1998. Various restoration and remodeling projects have occurred since.