This marker commemorates "Guitar Slim," one the most influential blues guitarists from the state of Mississippi. Eddie Lee “Guitar Slim” Jones was an influence on many of the men that created the music associated with blues today. Artists from Buddy Guy, Robert Cray, BB King, and even Eric Clapton were all influenced by Guitar Slim, whose style brought a new form of energy and intense feeling to the electric guitar that no one had heard before. 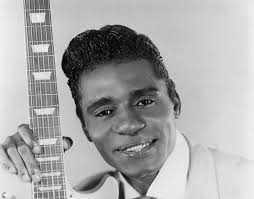 This marker is part of the Mississippi Blues Trail

Guitar Slim, while being one of the more influential guitar players in the blues, is still looked at as an underrated member of blues history. Eddie Lee “Guitar Slim” Jones was an influence on many of the men that created the music associated with blues today. Everyone from Buddy Guy, Robert Cray, BB King, and even Eric Clapton were influenced by Guitar Slim. His style brought a new form of energy and intense feeling to the electric guitar that no one had heard before.

A lot of people call Guitar Slim the father of Electric Blues. Before Slim, blues was mostly played on acoustic guitar and a few other instruments like harmonica and piano. But Slim changed all that when he burst onto the scene in the blues world. Eddie Lee Jones was born on December 10th, 1926 in New Orleans, Louisiana. He was introduced to the blues at an early age and began to play guitar at the age of seven. By the time he was in his twenties he was already well known around New Orleans as a guitar virtuoso. As he began to play in the local blues clubs around New Orleans he developed a reputation as a flamboyant and energetic showman. This reputation had a profound effect on players such as Buddy Guy. Guy shares the same flamboyancy and showmanship of Guitar Slim even today at the age of 81. Guitar Slim became a household name by the time he was 25 and soon began to gather the attention of record companies looking for new talent.

In 1954 Guitar Slim spread his reach of popularity across the country with the release of his most famous song. Slim released “The Things I Used to Do”. The song was the biggest rhythm & blues hit of 1954 and one of the three top R&B records of the entire ‘50s decade. This song put Slim on the map and propelled him to major popularity across the nation and the world. The song has been covered by many of those whom Slim influenced. Buddy Guy covered the song in the 60s and Steve Ray Vaughan covered it in the 80s and 90s. But it wasn’t just his songs that influenced other players. It was the way he performed on, and off the stage. Slim would often times leave the stage and exit the club he was playing and play his guitar outside. His guitar would be connected to a cable as long as 350 feet, giving him the opportunity to spread his music around the street corner and down the block. This act can also be seen in shows performed by Buddy Guy. Guy has done the same thing on numerous occasions. There is only one person he could have learned that from and that is Guitar Slim. Needless to say Guitar Slims’ reputation and influence reached a large variety of audiences and is helping keep the blues alive even to this day.

Guitar Slim first began his music career as a choir boy at his mother’s church. But once he was introduced to music outside of the church it changed everything. His family soon moved out of the city and landed in Greenwood, Mississippi. It is here where he was introduced to the Jitterbug style of dancing and the music that came with it. Soon he was introduced to blues and that was the final straw, he had to be a blues man. Once he got his hands on a guitar everything changed and the rest is history. Much to his mother’s dismay he moved back to New Orleans to pursue his career in music. If it wasn’t for their move to Greenwood we may have never heard of Guitar Slim or his wonderful influence on the world of blues music.

In closing, Guitar Slim has been cited as a major influence by many blues guitarists, from Buddy Guy, Chick Willis, Stevie Ray Vaughan, and Billy Gibbons. He has been called the predecessor of Jimi Hendrix for the free-spirited, ferocious way he attacked his guitar. Guitar Slims’ influence is still being felt today in both modern and “old-school” blues music. Guitar Slim was inducted into the Blues Hall of Fame in 2007.