Also known as the "Cathedral of the Plains," the Basilica of St. Fidelis is perhaps the most impressive landmark in Victoria. It has been an important religious center for the city since it was built in 1911. It was designed in the Romanesque Revival style, featuring twin towers that stand 141 feet tall and an impressive collection of 48 stained glass windows (manufactured by the Munich Studios in Chicago) that are worth $1 million dollars today. The church was added to the National Register in 1971. It was also declared a minor basilica in 2014. 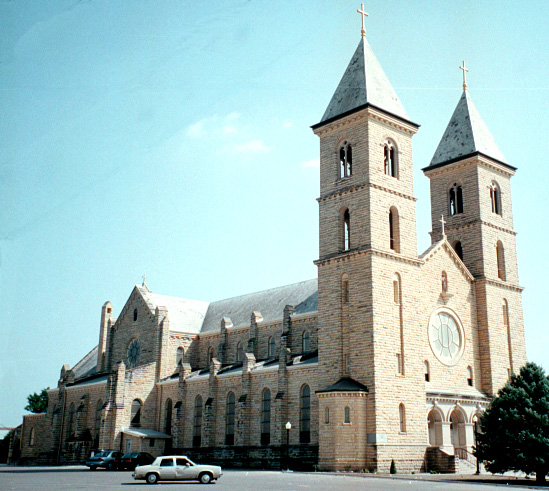 The original settlers to the area were gentleman English farmers who arrived in 1872, who wanted to replicate their aristocratic life here in Kansas. German-Russians, called the Volga Germans after the area in which they lived in Russia (next to the Volga River), arrived in the mid-1870s to escape forced conscription into the Russian army. The English eventually left as they could not adapt to the rugged Kansas climate. The Volga Germans, however, were used to harsher climates and rugged terrains. They would constitute the initial Catholic community in Victoria (and Hays).

By 1900, the community grew to a size that required a bigger church. The congregation called on the community to help in any way they could, especially by hauling wagon loads of stone to the church construction site. The church earned its nickname after William Jennings Bryan, an important national political figure of the early 20th century (he ran for President a few times and was known as a great orator), visited the church in 1912.