The Equestrian Statue of George Washington 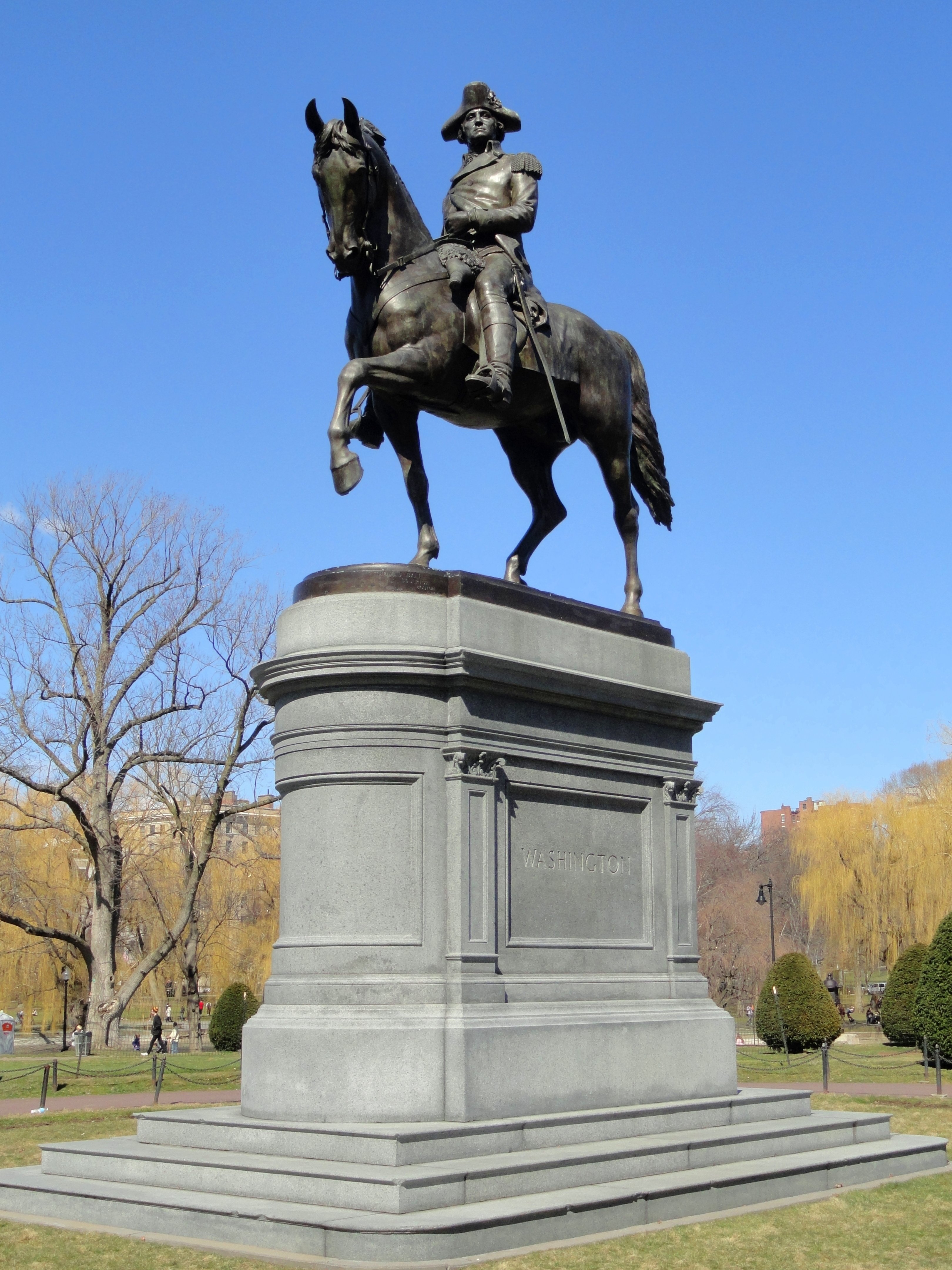 The statue, sometime in the 1800s. (Courtesy of the Boston Public Library.) 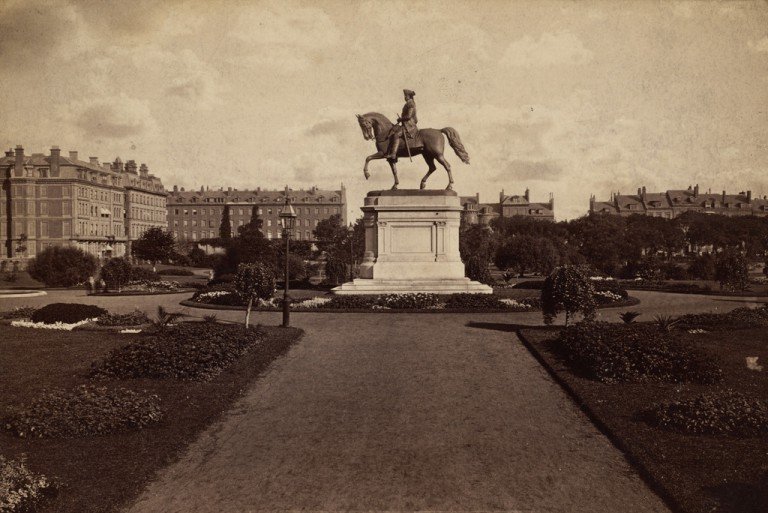 The statue, as it stands today. (Courtesy of the Boston Public Library.) 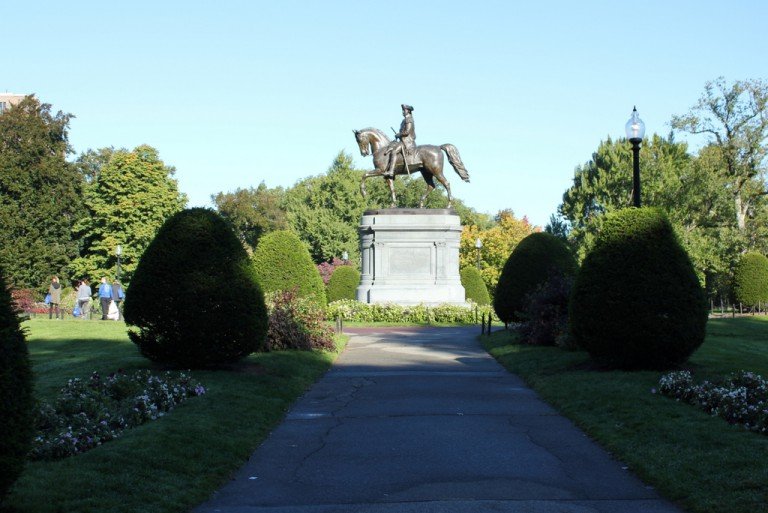 The statue lit up at night against a background of skyscrapers. 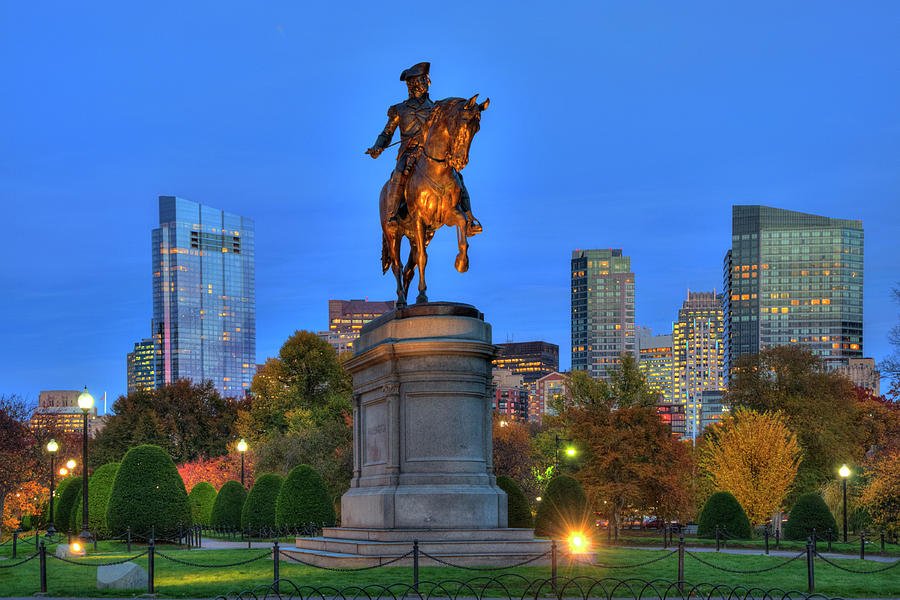 The bronze statue stands roughly twenty-two feet tall on a sixteen-foot granite pedestal; the total height of the statue is thirty-eight feet, making this one of the largest statues in Boston.3 It is located near other popular landmarks and tourist spots including the Make Way for Ducklings statues, the Ether Monument, and the Massachusetts State House.

The statue depicts the Revolutionary War hero and eventual first president of the United States George Washington on horseback. Washington faces westward, carrying a stoic expression as he unsheathes his sword, presumably preparing for battle. Washington wears military uniform, including a bicorn hat. Notably, the coat does not bear any military medals or insignia; instead he wears a simple uniform that reveals his own aversion to idolization. Nonetheless, Washington was aware of the important role his personal presentation and appearance played in relation to his leadership.4

As the commander-in-chief for the Continental Army, Washington exhibited great tactical skill on the battlefield despite often being outnumbered by his British counterparts. In 1776, he successfully drove the British out of Boston, which would become a bastion of revolutionary ideals.5 Washington was widely respected by his peers, who viewed his military prowess and similarities to the Roman statesman and military leader Quinctius Cinncinatus — a figure who chose to peacefully return to his farm after being given complete control over the Roman state rather than remain as a tyrant — as indicative of his abilities as a leader.6 Their admiration for Washington’s values was reflected in his unanimous election as the president of the Constitutional Convention of 1787, a position that Thomas Jefferson and others would have to persuade him to accept.

By the mid-1800s Washington had become a symbol of American patriotism and stability. The myth of Washington had already begun to overshadow the true nature of the man himself. In his own lifetime, Washington was not fond of the attentions thrust upon him in public life. He performed his duties, but the pomp and circumstance associated with the positions of power he held were not a draw for him. Washington is commemorated in statues and monuments that span not just the United States, but also the globe. After his death, Washington became increasingly synonymous with American revolutionary ideals of freedom. His name carried the weight of these ideals and as a result, the weight of the nation. As historian Marcus Cunliffe asserts: “the man is the monument; the monument is America.”7

Inspired by the contemporary vision of Washington, Bostonians formed a committee to oversee the creation of a monument in his honor. The committee, which included then mayor Alexander Hamilton Rice, decided that only Massachusetts artists would participate in the design of the statue.8 Artist Thomas Ball was commissioned to design the statue, while artist and architect Hammatt Billings designed the pedestal upon which the statue would stand. Initially the committee raised $12,000 for the piece, but further donations allowed the total cost of the work to exceed $42,000.

The committee employed a variety of tactics to increase their funds, including fundraisers throughout the northeast. Philanthropist and committee member Robert Charles Winthrop introduced a speech delivered by Mayor Rice at the Boston Music Hall, which is now the Orpheum Theater. The speech, given in 1859, was intended to raise fund for the statue and Rice deftly persuaded audience members to donate to the cause. Rice called on the patriotic inclinations of the audience stating, “a love of country, a love of liberty, call upon us.”9 Ultimately, in combination with a fair held at the same location, the committee was able to raise roughly $22,000. Another $5,000 was donated by the Everett Statue Committee plus $10,000 that was appropriated by the City of Boston.

Due to bronze shortages caused by the Civil War, it took nearly ten years for the statue to be cast and erected in the Boston Public Garden. The statue was finally unveiled at 5:30 p.m. on July 3, 1869.10 Since then, the statue has become a symbol the greater freedom that Washington has come to represent in both the city and the country.

9 Winthrop, Robert C. Luxury and the Fine Arts, in Some of Their Moral and Historical Relations. An Address Delivered at the Music Hall, Boston, in Aid of the Fund for Ball's Equestrian Statue of Washington, on the Evening of 13 May, 1859. Making of America. Boston: Little, Brown and Company, 1859.