On display at the Harrisburg (PA) Transportation Center, GG1 #4859 is an electric locomotive that was built in Altoona, Pennsylvania in 1937. GG1 #4859 was one of the first electric locomotives put into service along the east coast and the first electric to haul a passenger train from Philadelphia to Harrisburg in 1938. It was retired in February of 1980. GG1 #4859 was then saved and restored largely through the efforts of the Harrisburg branch of the National Railway Historical Society and is currently owned by that organization. It was listed in the National Register of Historic Places in 1982 and re-listed in 2004.

#4859 sits under the train shed at the historic Harrisburg Transportation Center. 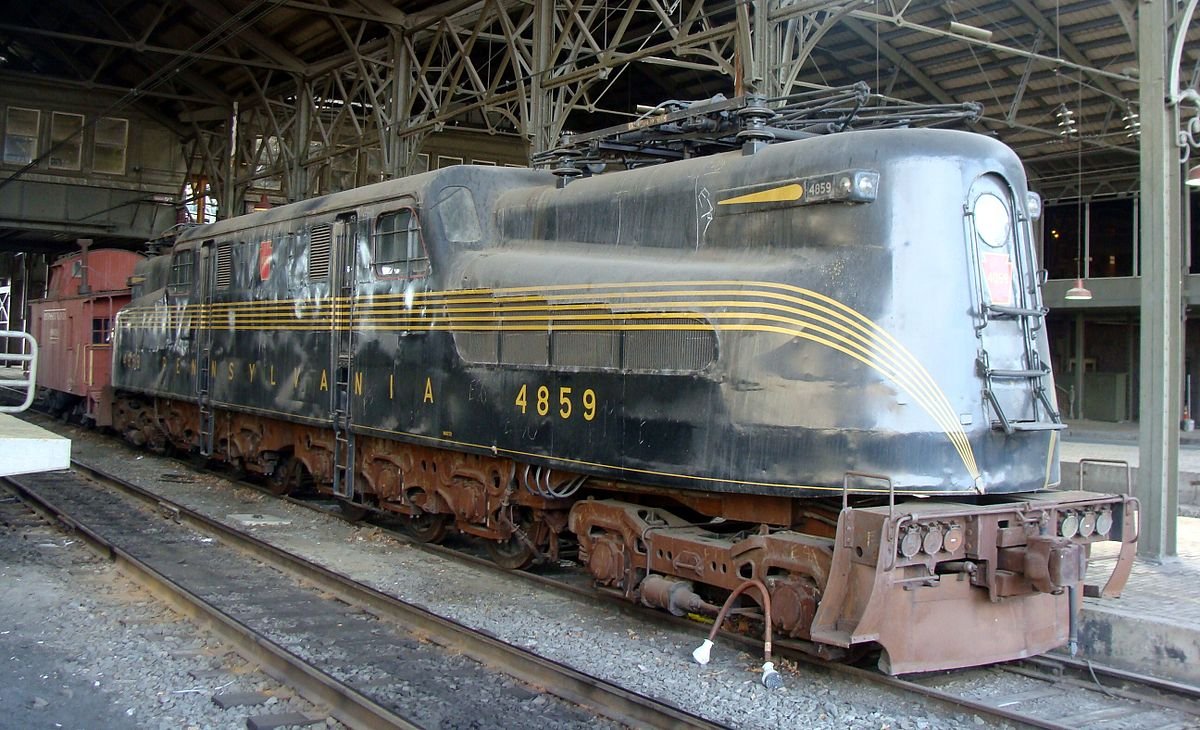 #4859 with its two pantographs extended which slide along the electrified overhead catenary wires. 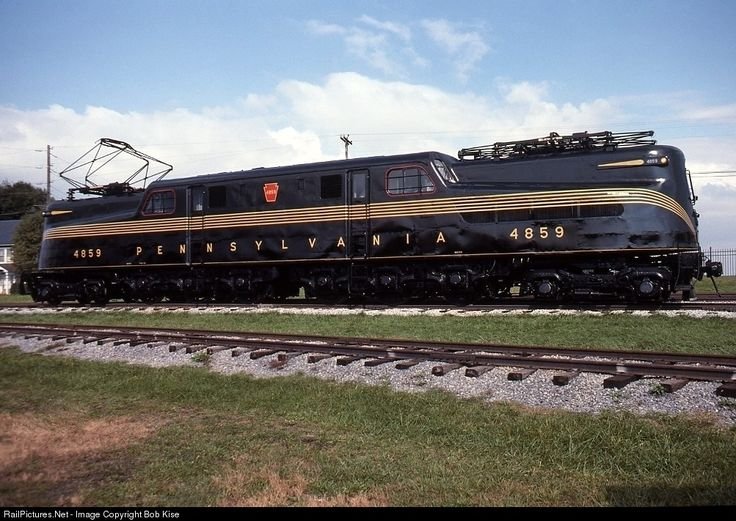 #4859 soon after it was retired from service at Strasburg, Pennsylvania. 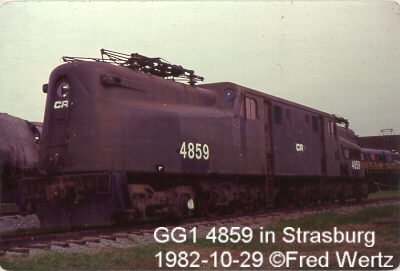 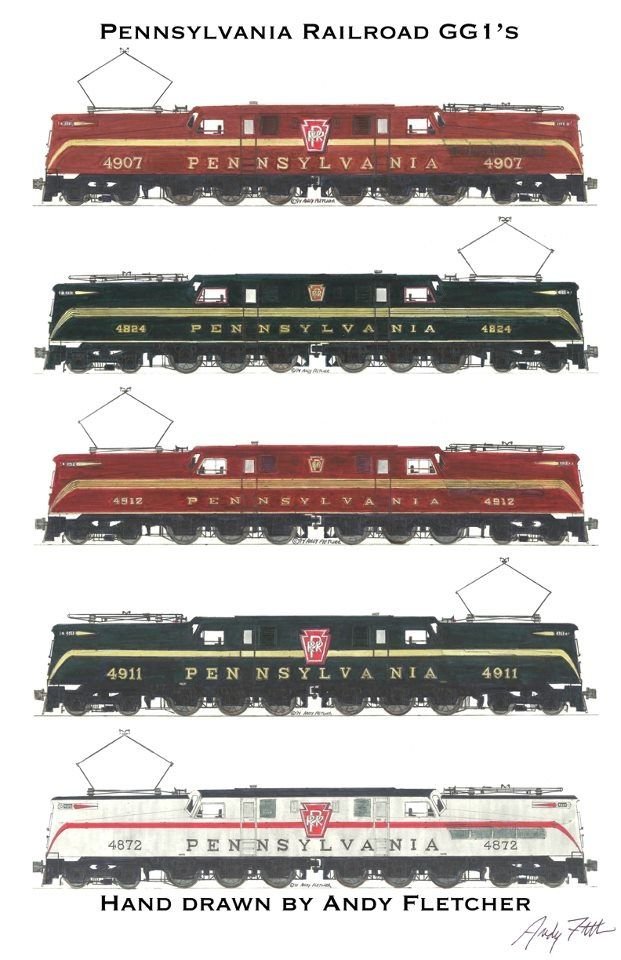 Inside the cab of a GG1. 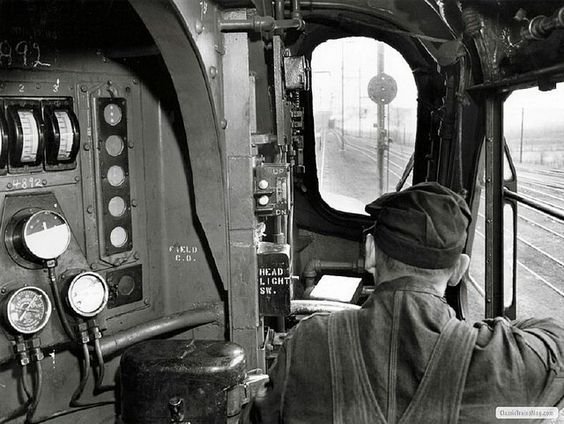 By the end of World War I the railroad industry began to search for a replacement for its fleet of steam powered locomotives and all their associated shortcomings and began to explore electrical power.  They discovered that electrical locomotives were faster than their steam counterparts, could haul heavier loads, had lower maintenance costs, and less down time.  As a result, various railroad companies contracted with General Electric to produce a locomotive that would meet all their needs after eastern rail lines had been “electrified.”  General Electric responded with the GG1 Streamlined Electric Locomotive.

The Pennsylvania Railroad placed an order for 57 GG1s in 1934 and the first was delivered the next year.  GG1 #4859 rolled out of the Juniata Locomotive Shop in Altoona in 1937.  It was, and still is, an articulated locomotive with two frames, each possessing three driving axles and one guiding truck with two axles.  This configuration is referred to, in railroad parlance, as a 2-C+C-2 arrangement.  Its 12 traction motors, two for each of the six driving axles, generate 11,000 volts, 4,620 horsepower and drove the locomotive in excess of 100 mph (but a restrictor limited its max speed to 90 mph).  It also features dual cabs located at its center to protect its crew in the event of an accident.  This cab location also permitted it to be operated in either direction without turning it around at a wye or turntable.  Its 79-foot long, 10-foot wide, 15-foot tall streamlined, welded shell was designed by Raymond Loewy and painted a Brunswick green with gold striping running its length, often referred to as “cat’s whiskers.”

In January of 1938, it pulled the “Metropolitan,” a passenger train, from Philadelphia to Harrisburg, the first such electric locomotive to arrive in Pennsylvania’s capital.  As the number of commuters utilizing trains decreased as the decades passed, #4859 became primarily a freight hauler by the mid-1960s, with an occasional short-haul of a passenger train from New York City to Philadelphia.  By the 1970s, it became apparent that the future of locomotives belonged to diesel (or the combination of electric and diesel) and the GG1s were eventually pulled from service.  #4859’s last duty was to assist #4887 in delivering a load of freight from Enola, Pennsylvania to Edgemoor, Delaware.  It was retired in February of 1980.  All the GG1s were out of service by the end of 1982.

While most of the GG1s were scrapped, #4859 was saved by the National Railway Historical Society and it found a new home at the Pennsylvania Railroad Museum in Strasburg where it was restored.  In 1986 it was gifted to the Pennsylvania Historical and Museum Commission and moved to the Harrisburg Transportation Center.  The Harrisburg chapter of the National Railway Historical Society assumed ownership of #4859 in 2009 and continues to raise funds for its continued upkeep.