Sabbathday Lake Shaker Village was founded in 1783, one of eighteen Shaker communities that were created in America. Referred to as “the least of Mother’s children in the East" when it was created, it is now the only functioning Shaker community today. The over 200 people adhere to a strict schedule each day, with the main activities being eating, worshipping, and working. The work includes the making of handmade crafts, such as baskets and woven materials. This community can be visited from the Friday of Memorial Day weekend through Columbus Day and guided tours are available through the museum.

This is the main dwelling in Sabbathday Lake Shaker Village, which is a communal living community

This photo was taken in 1873 of the village 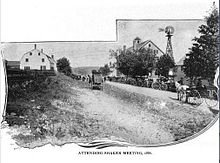 The Shakers, also known as the United Society of Believers, was founded in 1714 in England. Their name originated from the way they violently quaked when worshipping. Because of discrimination in Europe, the Shaker leader, Mother Ann, decided to move to America with eight of her followers. Landing in New York, they constructed a small village in Albany. They kept a low profile, as they had arrived just before the American Revolution and they feared being persecuted for being British. By 1787, however, American converts were now heading the church and eighteen more communities were constructed throughout America.

The Sabbathday Lake Shaker Community was founded in 1783 in New Gloucester, Maine. It started out with only five families, but within a year’s time, there were over two-hundred people living in the community. Space was limited, as all the families continued to live on Thompson’s Pond Plantation that had originally resided there. On April 19, 1794, the community came together and made an oral covenant stating that they would give their all to God in any way possible. This led to them building a church for public worship. A year later, they constructed a communal dwelling house. Over the next ten years, barns, mills, and other building dedicated to worship were constructed.

The Shakers adhere to a strict schedule every day. The day begins at 7:30 am when the community meets for breakfast. At 8:00 am the morning prayers start and last until 8:30 when the workday begins. At 11:30 work stops and prayer begins for half an hour until lunch begins. At 1:00 pm work resumes until 6:00 when dinner begins.

The Shakers believe they are called to manifest the Spirit of Christ to the world through their character. They believe that all men women and women are called to this holiness.God created the universe and is pure spirit, so he is both male and female. They also believe in Jesus and Mary's virginity, but they do not believe Jesus will return in the flesh for the Second Coming. Confession of sins is important and Shakers are supposed to have an open mind with God. The community is also celibate, so new members cannot be born into the community; they must join from the outside.

The Sabbathday Lake Shaker Community was referred to as “the least of Mother’s children in the East,” because it was the smallest and poorest of all the Shaker communities in the East. Ironically, it is the only active Shaker community today. It currently holds eighteen building that are located on 1,800 acres of land. Much of the land is dedicated to farming and small business ventures, such as basket making and weaving.

The Shaker Museum is open from the Friday of Memorial Day weekend through Columbus Day from 10:00 am to 4:30 pm.