Three years after a Civil War battle took place in Lexington in 1861, Confederate General Sterling Price returned to defeat another Union force in the city, albeit less decisively. In October 1864, a month after beginning his 12,000-man raid into Missouri, Price failed to achieve his goals of capturing St. Louis and Jefferson City. Determined to gather supplies and still score a propaganda victory over the north, Price turned west with the intention of attacking Union strongholds in Kansas. Passing through Lexington on Oct. 19, he engaged 2,000 men under Union General James Blunt in a running fight that lasted most of the day.

Union General James G. Blunt, who put up a stubborn defense against Sterling Price at Lexington and again later, at the Battle of Little Blue River. Blunt would play a pivotal role at Westport, and later pursue Price to the Arkansas border. 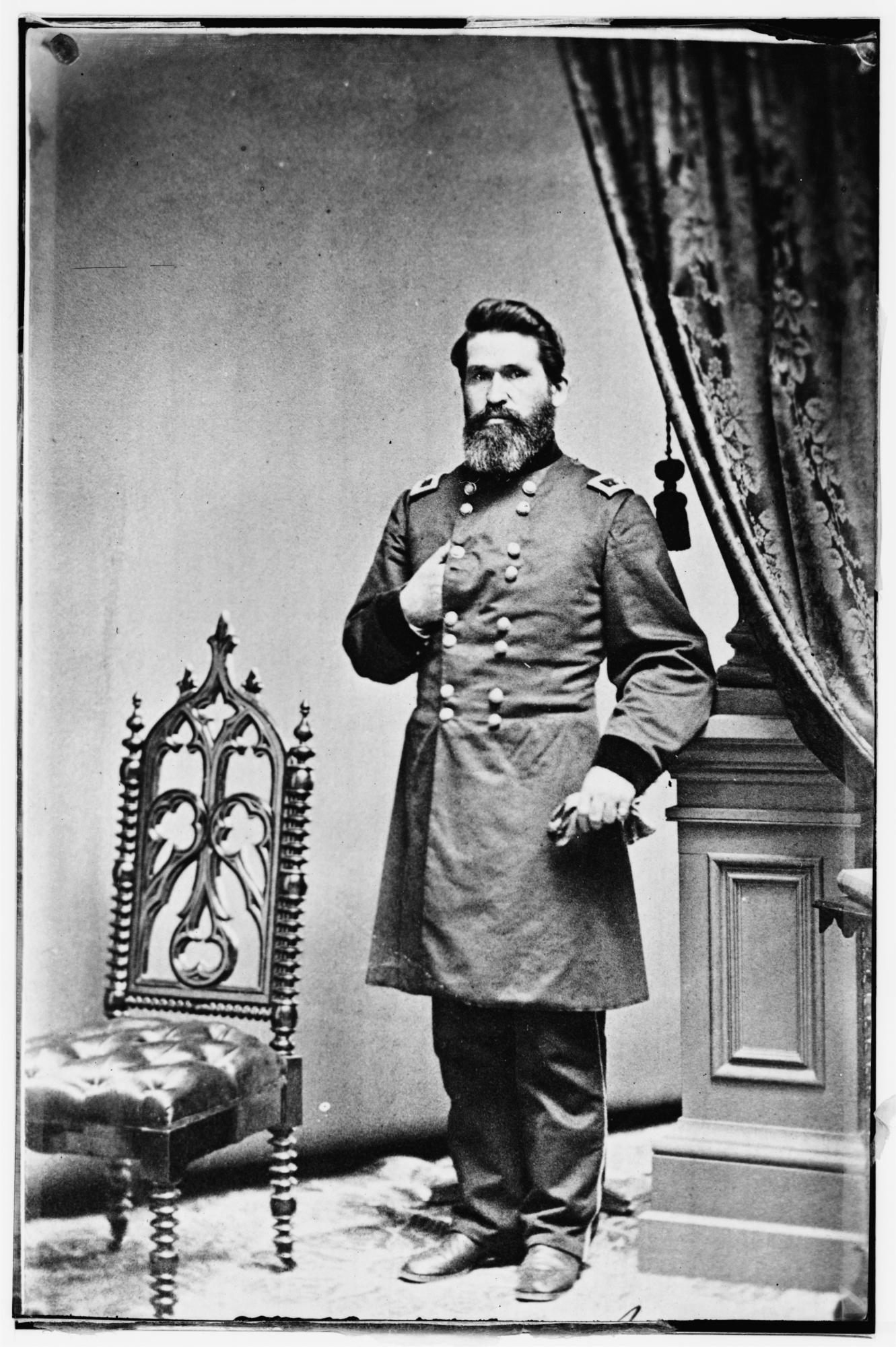 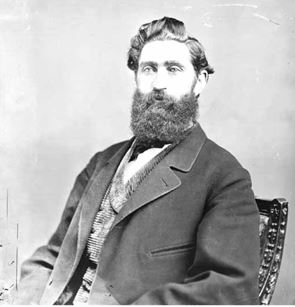 An artist's aerial view of Lexington only a few years after the war. Lexington was Missouri's fourth largest city at the time. 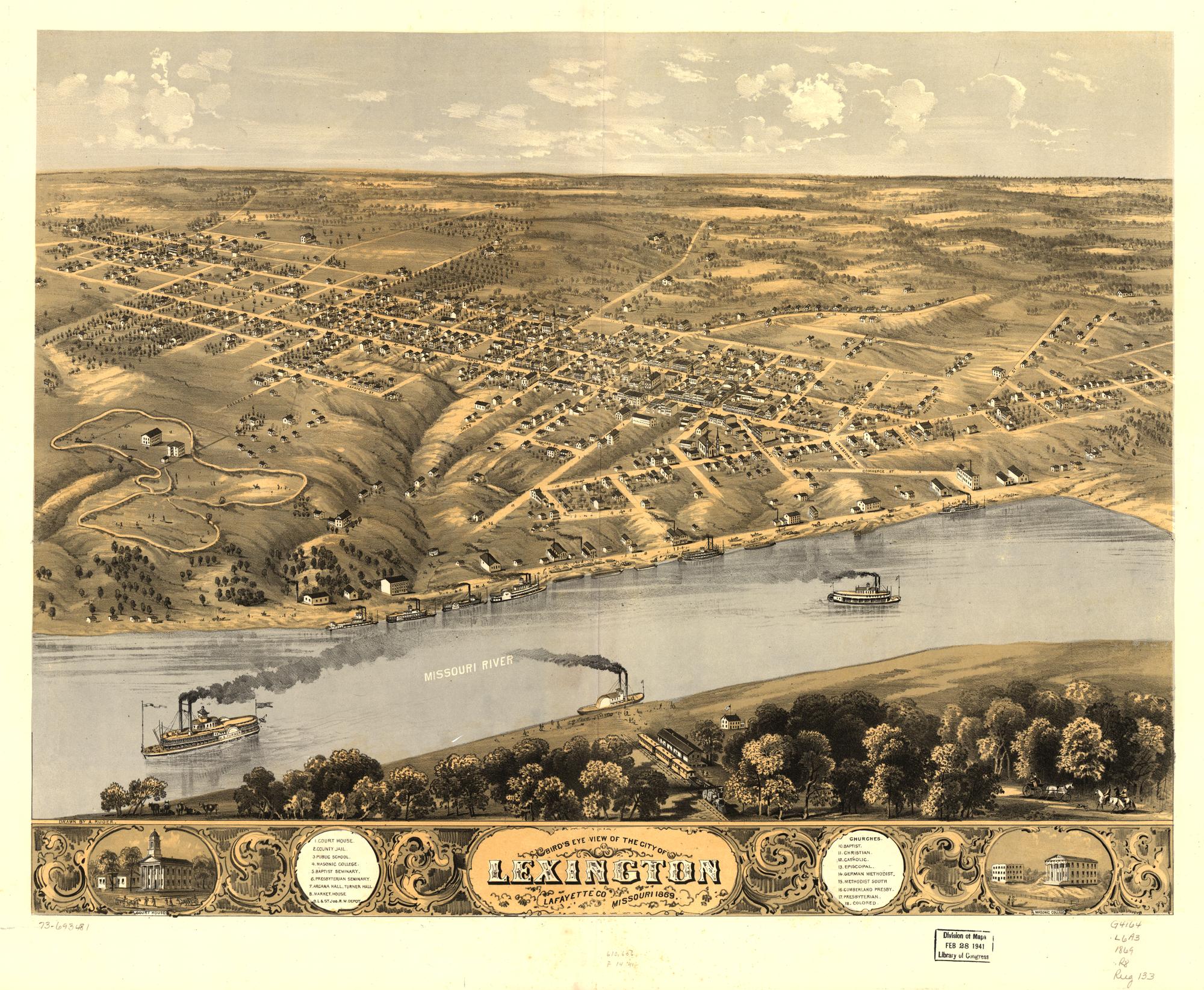 National park survey of the battlefield. Compared to the 1st Battle of Lexington in 1861, the 1864 battle was fought farther south, at the edge of town near modern-day Highway 24. 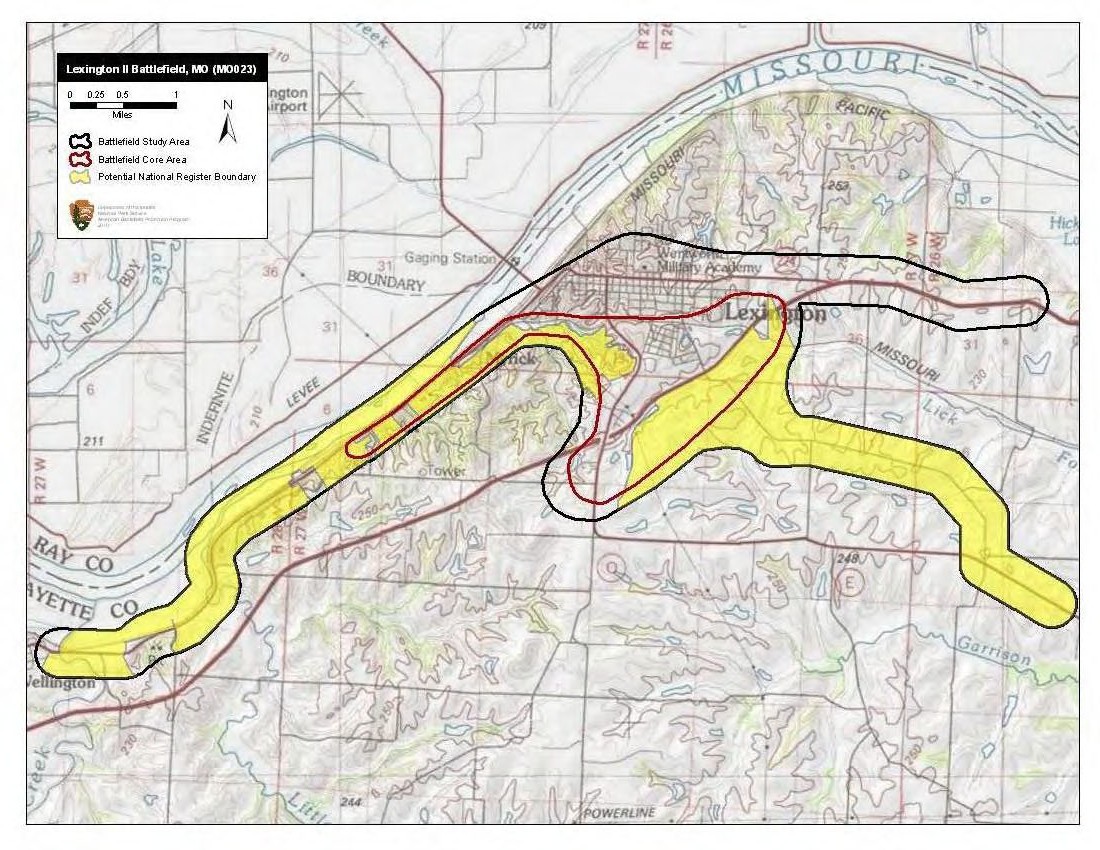 A map of Price's Raid in the days leading up to Lexington, from Charles D. Collins, Jr.'s excellent overview, "Battlefield Atlas of Price's Missouri Expedition of 1864." 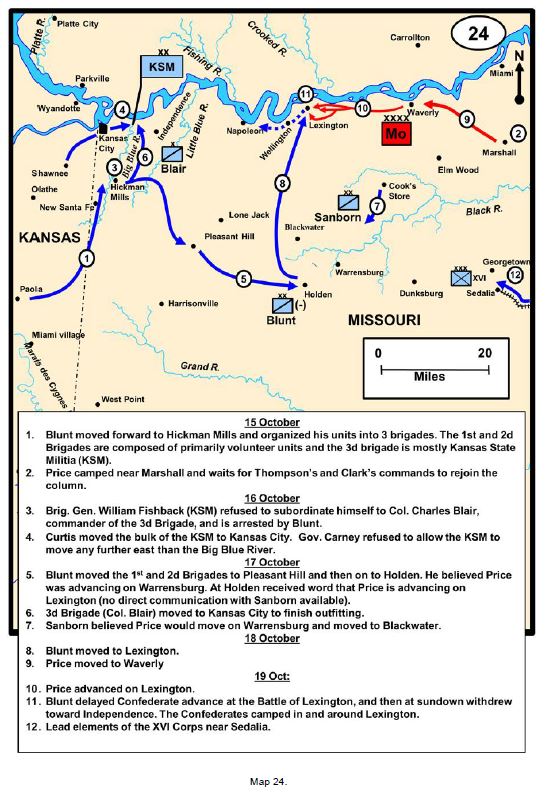 Military veteran Kyle S. Sinisi's book is one of the most recent and complete piece's of scholarship on Price's Raid. He currently teaches at The Citadel, the Military College of South Carolina. 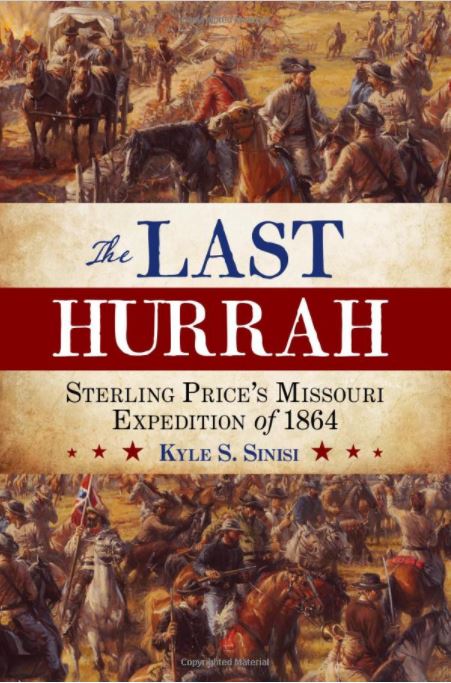 Confederate General Sterling Price. A former governor of Missouri, Price was affectionately known as "Old Pap" to his troops, and seems to have enjoyed great popularity despite a very mixed record as a commander. 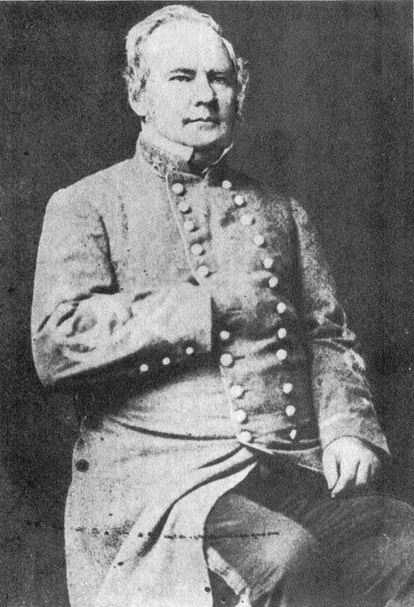 When the 2nd Battle of Lexington occurred on October 19, 1864, the jury was still out on whether Confederate General Sterling Price's 12,000-man invasion into Missouri would play a pivotal role in the reelection campaign of Abraham Lincoln. Price and his army had crossed the border from Arkansas into Missouri in late September with the objective of capturing Union-held St. Louis and Jefferson City, thereby placing Confederate governor-in-exile Thomas C. Reynolds in charge of a southern state government. It was hoped that this would stem the tide of recent Confederate defeats and prove to the North that the war was far from won, turning Northern public opinion toward peace and away from Abraham Lincoln's determination to win the war at all costs.

Price's success through September and much of October was mixed. Marching slowly northward, his army gathered significant numbers of sympathetic recruits in Missouri while disrupting Union supply lines. His large force scooped up isolated Union garrisons along the way but suffered a serious strategic blow when a futile frontal assault on Fort Davidson (near Pilot Knob, Missouri) resulted in over 1,000 casualties. Worse still, the subsequent delays allowed Union commander William S. Rosecrans to reinforce St. Louis and Jefferson City, forcing Price to swing westward and settle for a destructive raid through Kansas to save face. Price gave a dilatory Rosecrans the slip after the 4th Battle of Boonville, scoring easy victories over surprised Union garrisons at Glasgow and Sedalia on October 15. But his luck was running out.

Taking shape ahead of Price in Kansas was a growing force of Union militia under the command of General Samuel Curtis, head of the Department of Kansas. Curtis had been unable to maintain steady communication with Rosecrans as Price's Confederates cut down telegraph lines along their route of march, and Union cavalry of Rosecrans' command (under Generals Alfred Pleasonton and John Sanborn) had failed to sustain consistent contact with the enemy and thereby keep Rosecrans and Curtis informed of Price's movements. Luckily for the Union cause, Curtis was an experienced and proactive commander. When Price had first crossed into Missouri in September, Curtis, who was campaigning against Indian raids in western Kansas, immediately returned to Fort Leavenworth to prepare his defenses, even though it was unclear at the time where Price was headed.

Curtis summoned the Kansas militia and, by commandeering most of the available boats along the Kansas-Missouri border, was able to outfit and supply his large new "Army of the Border" in a remarkably short amount of time. Though faced with stubborn opposition by the governor of Kansas--who believed that Price's advancing army was a mere hoax perpetuated by Curtis to call out the militia and usurp political power--Curtis soon had 15,000 men stationed along Price's probable lines of attack into Kansas.

When General Curtis attempted to push his army forward to meet Price's raiders before they reached Kansas, however, he ran into problems. The majority of his militia refused, insisting they had enlisted to defend Kansas, not Missouri. Many, like their governor, were not fully convinced that Price was coming at all. Price's disruption of Missouri's telegraph lines meant that very little news was available, and many Kansas citizens were certain that Price had already turned south back toward Arkansas. As a result, only 2,000 of Curtis's men advanced across the border under the command of General James G. Blunt.

Blunt quickly pushed northward from Holden to the town of Lexington, Missouri's fourth largest town at the time and scene of an important victory for Sterling Price in 1861. Arriving on the morning of October 18, Blunt dispersed his troops in defensive positions around the city. Given that Lexington was not an easily-defended city, being situated on flat, open farmland allowing attackers many different avenues of approach to overwhelm an outnumbered defending army, it is puzzling that Blunt did not declare martial law or begin building defenses until the next day, the morning of the 19th. By then, it was too late.

At 11 AM on October 19, Confederate troops encountered Union pickets deployed several miles out from Lexington. Rather than open the battle immediately, Price ordered his left flank, under General Jo Shelby, to continue moving westward so as to surround Blunt's vastly outnumbered force. Blunt, however, had received word from General Curtis that no reinforcements would be coming to aid him, and had wisely deployed his troops to protect the road to Union-held Independence, Missouri to hold open his path of retreat.

The calculated Union retreat began shortly after the battle opened, though not without some stiff fighting around the town, particularly where Blunt's advance guard was stationed along the Dover Road, three miles east of Lexington. There Union cavalry under Captain H.E. Palmer, armed with repeating rifles, repulsed three Confederate assaults before discovering that Blunt was withdrawing westward.

With the Confederates close on his heels, General Blunt placed Colonel Thomas Moonlight and his 2nd Brigade of Kansans in charge of the rearguard. For the next six hours, Moonlight fought an intense running gunfight along the road to Independence, taking advantage of fences and ravines to keep the Rebels at bay. Moonlight's past experience as an artillery officer proved useful, as he made considerable use of a battery of four howitzers to cover his retreating cavalrymen. The Confederates finally broke off their pursuit after nightfall at Sni-a-Bar Creek, six miles southwest of Lexington.

Blunt's forces continued their breathless march through the night, constantly rejoined by small groups of soldiers who had been cut off during the retreat. Perhaps most significant was Captain H.E. Palmer's men, who had pretended to be Confederate bushwhackers (guerillas) to sneak through the masses of Rebel troops occupying Lexington after Blunt's withdrawal. In all, Blunt's outnumbered force had only suffered around 40 killed, wounded, or missing during the battle.

The stage was now set for Price to advance on Independence, where the Battle of Little Blue River would take place on October 21.

Though the First Battle of Lexington is vividly memorialized with a Missouri State Park and visitor's center, the Second Battle of Lexington has, as of this writing, no markers to denote its key geographical features. Though areas of the second battle overlap with those of the first, much of the most intense fighting in October 1864 occurred on the southwest side of the city, along modern-day Highway 24. Blunt's retreat took place along the Old Independence Road, paralleling the Missouri River, but no markers appear until one reaches the Little Blue River battlefield near Independence.