The Cullman County Museum is a historical museum located in downtown Cullman, Alabama, on the corner of Arnold St. and 2nd Ave. N.E. It is housed in a replica of the home of Col. John G. Cullmann, the founder of Cullman. 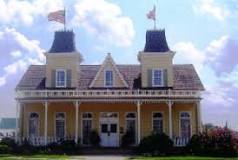 The Cullman County Museum is housed in a replica of Col. Johann G. Cullmann’s home. Packed with interesting artifacts spanning two centuries, the campus of the Museum offers items of interest too. From the deck of our sprawling front porch you will see a towering statue of our founding father, the town gazebo, historic plaques from former city buildings, a restored depot and one of our many city parks.

Arriving at the front of the Museum you are welcomed by an old time front porch with requisite swing for relaxing. Entering the foyer of the Museum is a large table with current event information and a sign in sheet for Museum guest. To the left of the table is a console with brochures and maps for tourist to use in planning their trips. Also in the front room are several plaques and pictures representing Cullman’s partnering with the German city of Frankweiler. There is a wine barrel lid which was presented by representatives of the community of Frankweiler as a symbol of our strong association. There is a handsome portrait of Colonel Cullman under which is a display case which contains the death certificate of John G. Cullman, a book containing his father’s signature and a legal book written in both German and English.