Built in 2004, Citizens Bank Park is a world-class, baseball only, stadium in southern Philadelphia, that acts as the home field for the Philadelphia Phillies franchise. In retrospect to the life-span of the Phillies, this ballpark is a new home and a breath of fresh air compared to where they had played previously. The stadium combines Philadelphia's rich tradition of sports architecture with unmistakably modern style. This 1.15 million square foot facility was built on a 21-acre site, in what is now known as the Philadelphia Sports Complex. 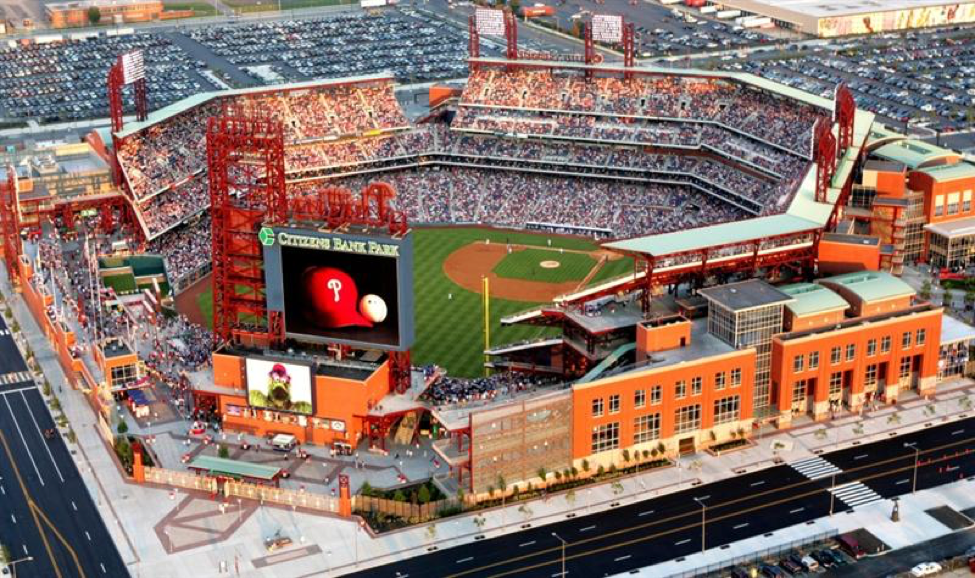 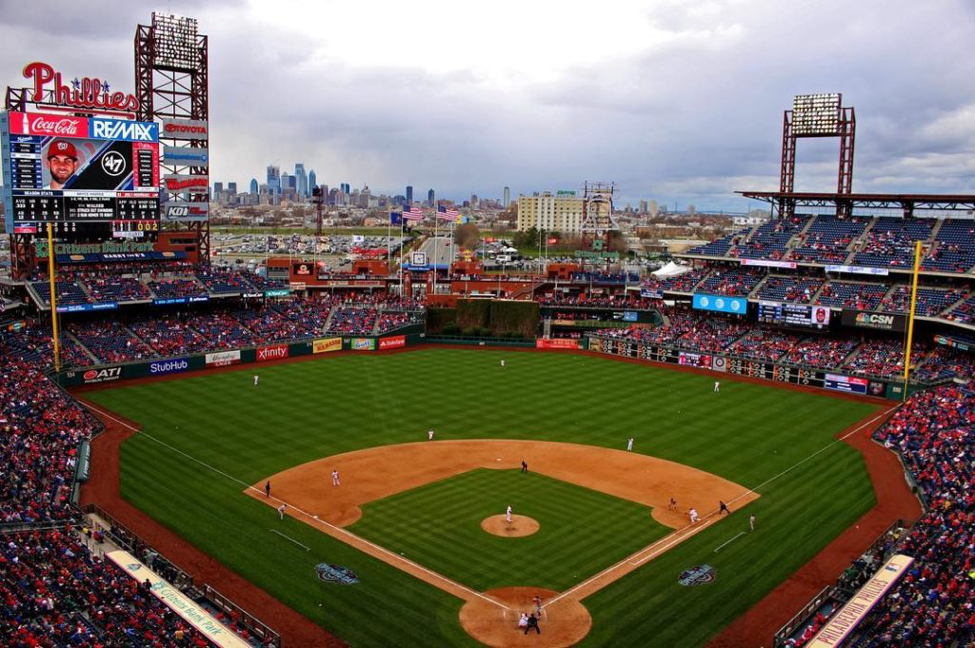 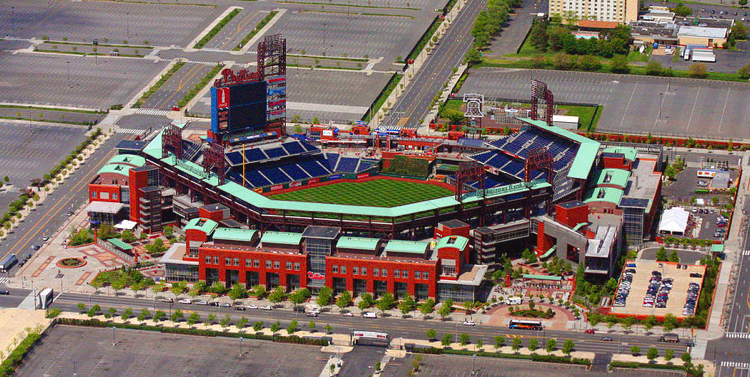 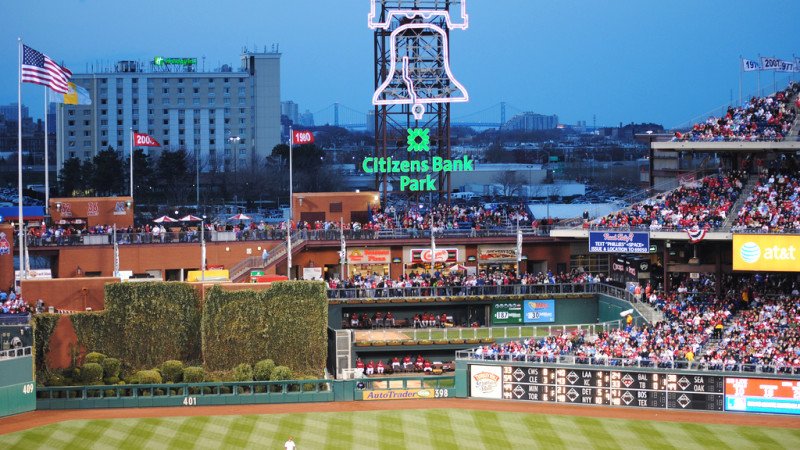 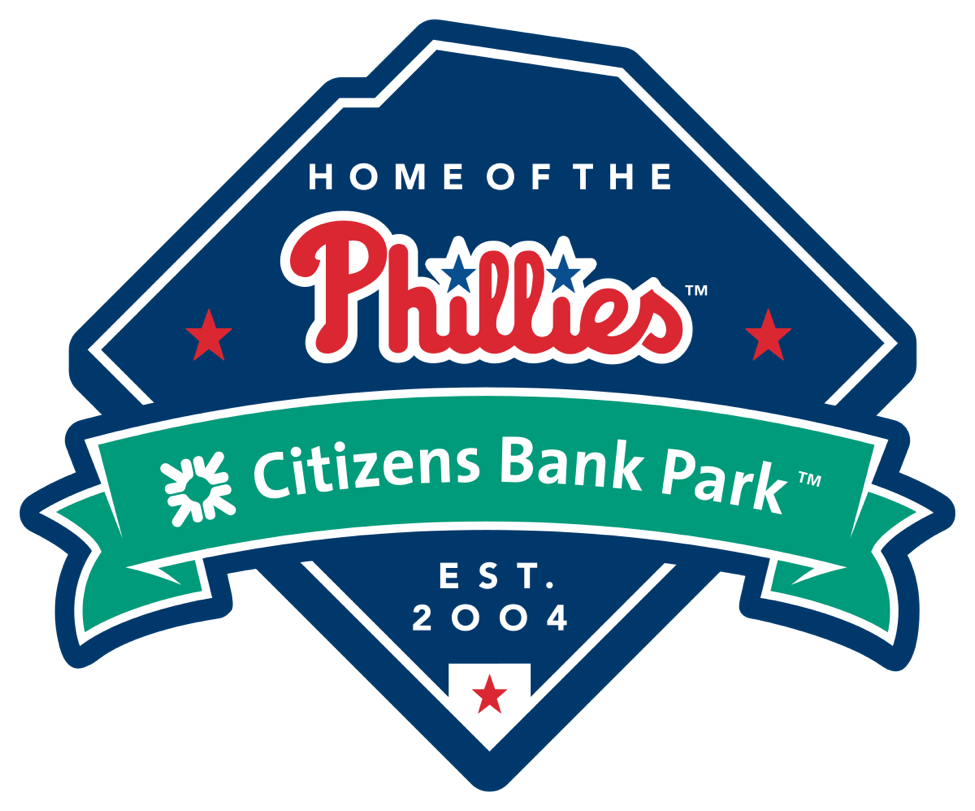 Veterans Stadium, the former home to the Philadelphia Phillies. Courtesy of the MLB 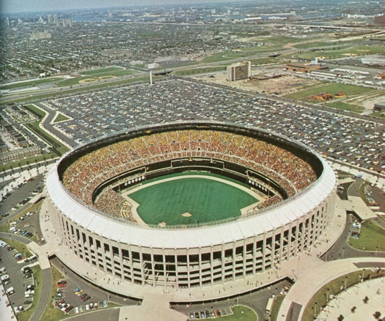 Considering that the sport of baseball is widely regarded as the most prominent American pastime, it is only fitting that a stadium receives as much hype as the team that plays within it. In some cases, an athletic stadium can be among the most visited locations in any given city. This holds true for Philadelphia, Pennsylvania. The city of Philadelphia is flooded with history, and even more specifically sports history. The baseball team that holds the city’s name, the Philadelphia Phillies, is considered to be one of the oldest baseball franchises, as well as one of the originals. Citizens Bank Park is the current home to the Phillies franchise. However, like many other things the teams home has not remained constant. Also ever-changing is the success and popularity of the Philadelphia Phillies, being that these factors have fluctuated greatly in the team’s history.

Built in 2004, Citizens Bank Park is a world-class, baseball only, stadium in southern Philadelphia, that acts as the home field for the Philadelphia Phillies franchise. In retrospect to the life-span of the Phillies, this ballpark is a new home and a breath of fresh air compared to where they had played previously. But, that will come up later. Citizens Bank Park opened on April 12, 2004. Designed by two leading architectural firms, Ewing Cole Cherry Brott and HOK Sport, the stadium combines Philadelphia's rich tradition of sports architecture with unmistakably modern style. This 1.15 million square foot facility was built on a 21-acre site, in what is now known as the Philadelphia Sports Complex. With the ability to hold 43,651 fans in seats, Citizens Bank Park allows all spectators a view of its 440,000 cubic yards of playing field. Most importantly, this ballpark is inviting and brings what happens in a bustling city within, by offering views of the field from street level. It houses an Open Main Concourse, of 360 degrees, and state-of-the-art HD video boards that allows fans to constantly connect with the game. Also, an open outfield allows for a scenic view of Center City Skyline.

After deciding on the site of an old food warehouse, the new home of the Phillies cost $458 million to build, with taxpayers and private investors splitting the costs half and half, or about $229 million on each side. However, as part of the deal, the Phillies paid for the construction overruns and pay to maintain the ballpark. The Phillies sold the naming rights to Citizens Bank for $95 million over 25 years. This included $57.5 million for naming rights and $37.5 million for the Phillies broadcast media package. Prior to construction, three sites were discussed for the Phillies' new ballpark. They were Chinatown, a downtown site known as Liberty Yards and a site adjacent to Veterans Stadium. The Liberty Yards it was. The site in the, now known, Philadelphia Sports Complex was chosen and would also be the location of a new football stadium for the Eagles. With that, Philadelphia City Council approved the construction of two new stadiums and on November 13, 2000, Former Mayor of Philadelphia, John Street announced that the new Phillies' ballpark and Eagles' stadium would be located in the Sports Complex.

Many of the fans who sit in Citizens Bank Park and enjoy a Phillies game are not even aware of the struggle the team endured before arriving there. For over three decades the Phillies played at perhaps the worst multipurpose stadium built, Veterans Stadium. Not only was it large, with over 62,000 seats for baseball, but was well known for having the worst turf in sports. They also shared it with the NFL’s Philadelphia Eagles. So depending on the season, the facility acted as a football field or a baseball diamond. It was said that spectators were able to see the faint outline of a football gridiron on the baseball playing field. In a joint effort with other Pennsylvania professional franchises, including the NFL’s Steelers and the MLB’s Pirates, the Phillies and Eagles petitioned the state for the ability to construct new stadiums. They requested one for each of the four teams. After 33 years at Veterans Stadium, the Phillies moved into their new state-of-the-art facility, Citizens Bank Park in 2004. The stadium opened with an exhibition game against the Cleveland Indians.

Having had five different stadiums as their home over the history of the franchise, the Phillies embraced Citizens Bank Park. Since that time, the Phillies have captured a World Series championship title, two National League pennants, and five consecutive NL East titles, while countless records have been broken both on and off the field. However, even more important than the stadium itself, is the team that calls it home. Citizens Bank Park is an essential element to the overall history of the Philadelphia Phillies because it summarizes the inconsistent success and popularity of the team.

Now, in the 21st century, the Phillies are the oldest, continuous, same-name, same-city franchise in all of professional sports. After being founded in 1883 as the "Quakers", the team changed its name to the "Philadelphias". The team officially became known as the "Phillies" in 1890. Joining the Baseball scene early on, the Phillies played in the first World Series in 1915. They won the first game but were defeated afterward. Shortly after, the team set an attendance record in 1916 of 515,365 that stood until after World War II. By the time the 1920s arrived, the Phillies were slipping into what would become the grimmest period in association history. It lasted for 31 years during which time the Phils had just one first division finish.

In 1949, with the soon-to-be named Whiz Kids nearly in place, the Phillies wound up third in the league, their highest finish since 1917. In fact, if there was one thing that characterized the 1950s, it was the Whiz Kids. Simply, the decade belonged to the Whiz Kids, who were just the baseball team of the 1950 Philadelphia Phillies in Major League Baseball. This stellar performance put the Phillies into the 1950 World Series, where they sadly lost all four games to the New York Yankees. Nonetheless, for the Phillies, the 1970s marked the start of the team's Golden Era. It was easily the most successful period the club ever had. This period lasted for about a decade because finally, after 97 years, the Phillies finally reached the coveted spot in 1980 by winning their first World Championship. While in the World Series, the Phillies defeated the Kansas City Royals in six games. They won the first two, lost the next two, then won games five and six.  Afterward, the team took a dip again, losing the 1993 World Series to the Toronto Blue Jays.

On Sept. 28, 2003, the Phillies played in their final game at Veterans Stadium, and gave the place an emotional sendoff. Regardless, Citizens Bank Park brought a hint of luck. The Phillies made it to the World Series again, in both 2008 and 2009. This second straight World Series appearance was a first in franchise history. In fact, for the fifth time in 30 years, the Phillies played in a World Series, matching the Cardinals and Braves for the most. The Phillies finished the 2010 season with the best record in baseball for the first time in franchise history. However, finished 2015 with the worst record in baseball with plenty of change along the way.

Despite the team’s records, it can be seen that the fans are always loyal. The team set records in 2010 for attendance (3,647,249 fans, averaging 45,028 per game) and sellouts (81). This, though, should be taken with a grain of salt because in more recent terms the numbers are not the same. Journalist, Rob Tornoe, who writes for The Inquirer in Philadelphia, wrote a piece detailing the most recent decline in Philly fanatics. He discusses how the team leads the entire league in attendance decline, during the 2017 season. Tornoe states, “Average home attendance this season is down more than 8,000 people per game from last year, plummeting to an average of 29,975 per game. Compared to 2012, attendance is down nearly 14,000 people per game.” However, he makes it a point to say that the Phillies do have some the highest attendance rates amongst the teams with losing records. Tornoe suggests, “instead of slamming fans for steering clear of the ballpark, we should credit the 30,000 or so who come out every night despite the lackluster team their given to support.” All of this information goes to show that the Phillies have had the highest of highs but also the lowest of lows. Obtaining Citizens Bank Park was an incredible feat, but it may be possible that a flashy new ballpark does not necessarily make the team better. It has even been debated in other Inquirer articles that the Phillies no longer use the park to their own advantage.

Regardless of the numbers put into the scorebook, Citizens Bank Park has seen a lot of greats in its short life, and brings something special to the Philadelphia community. “The Bank,” as it is referred to, has seen its share of wins, loses, home runs, career records, and even World Series games, all in thirteen years. With the neon Liberty Bell that swings and rings after Phillies home runs, visitors and fans are embraced in the Philadelphia culture. Sports, a key factor in Philadelphian life, are neighbors to one another in one sports complex. The Eagles, the Phillies, the Flyers, and the Sixers all unite residents and visitors. Not only does baseball bring people together, but Citizens Bank Park and the Phillies bring people together, even Phillies and Mets fans. This field gives people chances to succeed, especially by commissioning four local artists to paint murals of the importance of baseball and the team throughout the stadium.

This stadium gives back. The Phillies' Red Goes Green program at Citizens Bank Park is in partnership with Aramark and Spectra. To offset the carbon footprint created by the team's utility power usage at Citizens Bank Park, the Phillies have purchased over 20 million kilowatt-hours of Renewable Energy Credits, which matches 100% of electricity usage with wind and solar generation. So, Citizens Bank Park goes beyond baseball. In fact, baseball is simply the stadium’s avenue to create a unified, yet diverse, community in which people can gather, forget their worries, and enjoy something that has been enjoyed for generations.