Between the years 1540 and 1542, Vázquez de Coronado lead an expedition in search of the Seven Cities of Gold. After reaching Quivira in 1541 (one of the presumed cities of gold), Coronado did not find endless riches, rather Coronado found himself in central Kansas near the location of the town, Lindsborg Kansas. Coronado Heights is located roughly three miles northwest of Lindsborg. Coronado is presumed to have climbed the small bluff, and it is rumored that once Coronado summited the heights, he decided to return back to Mexico. In 1936, the federal government sponsored Work Progress Administration (WPA) built a castle, as well as multiple eating and cooking areas, on top of the Heights honoring Coronado’s presumed journey to the summit. Free and open to the public, Coronado Heights is very much a site of recreation; providing a space for picnics, hiking, off-road bicycling, amateur astronomy, and exceptional natural views of the Smoky Valley in the central plains of Kansas.

Viewing the castle from the Western side of the bluff. 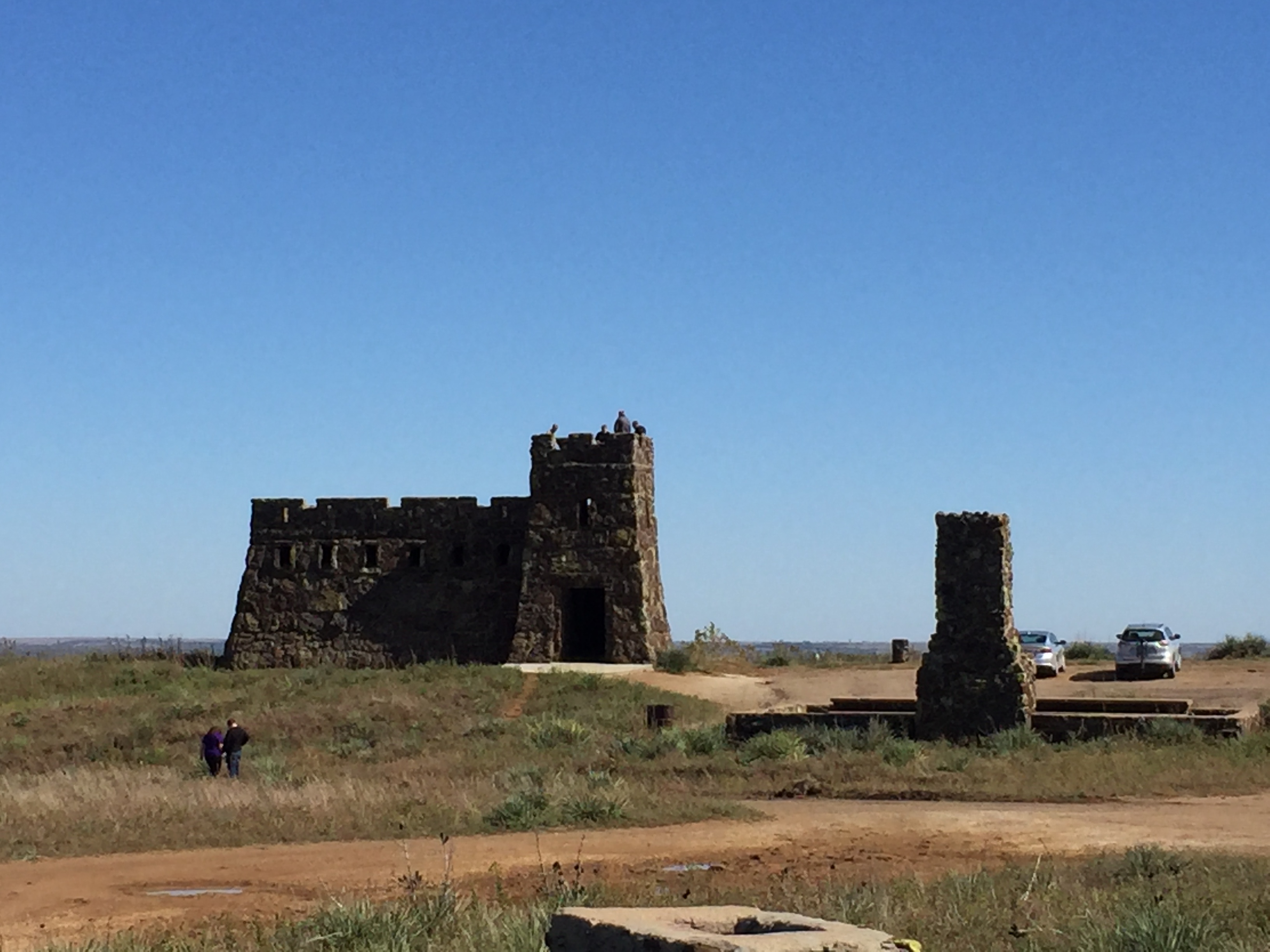 One of the many picnic areas encompassing the bluff. 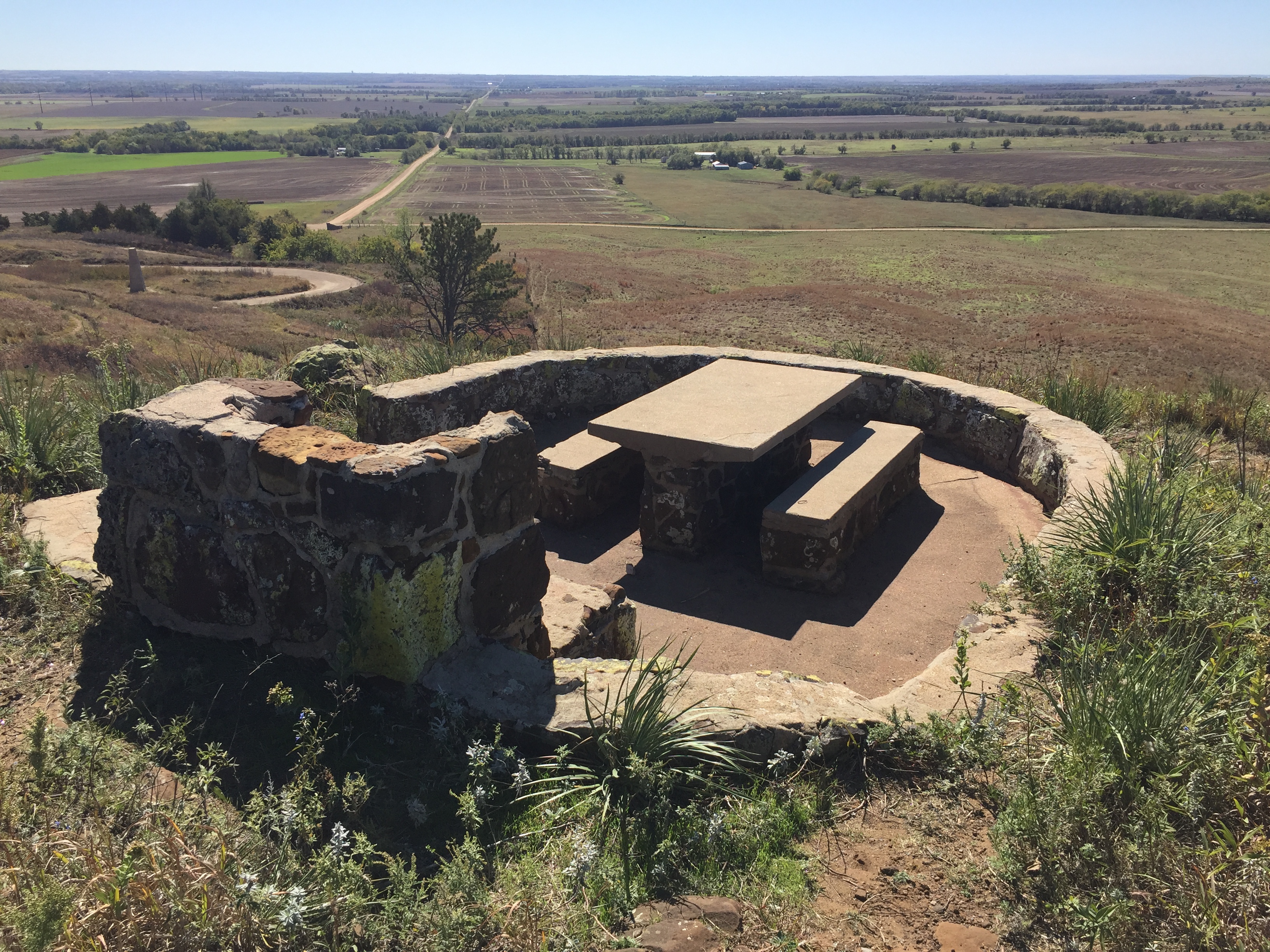 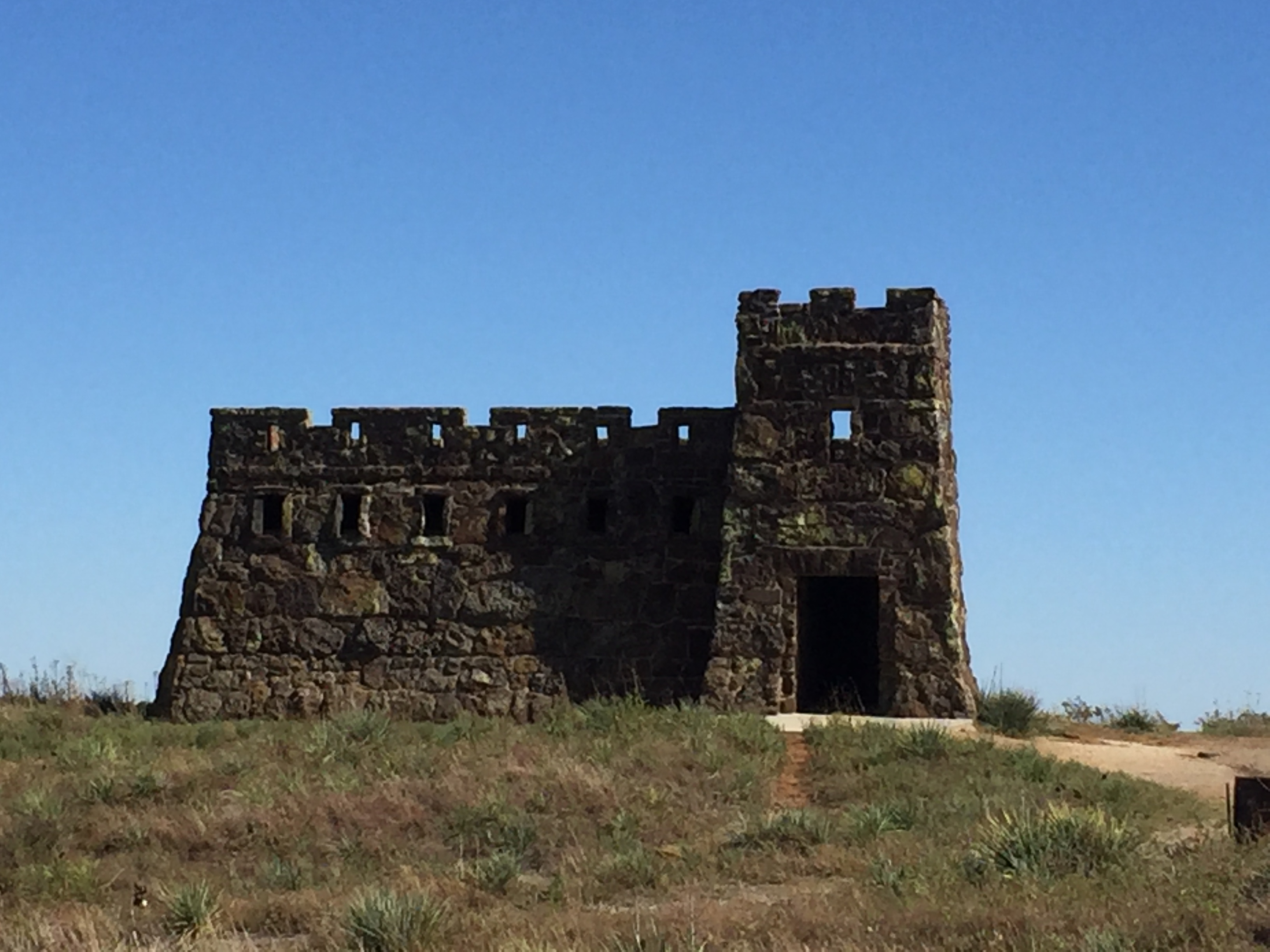 View from the castle roof facing the southwest. 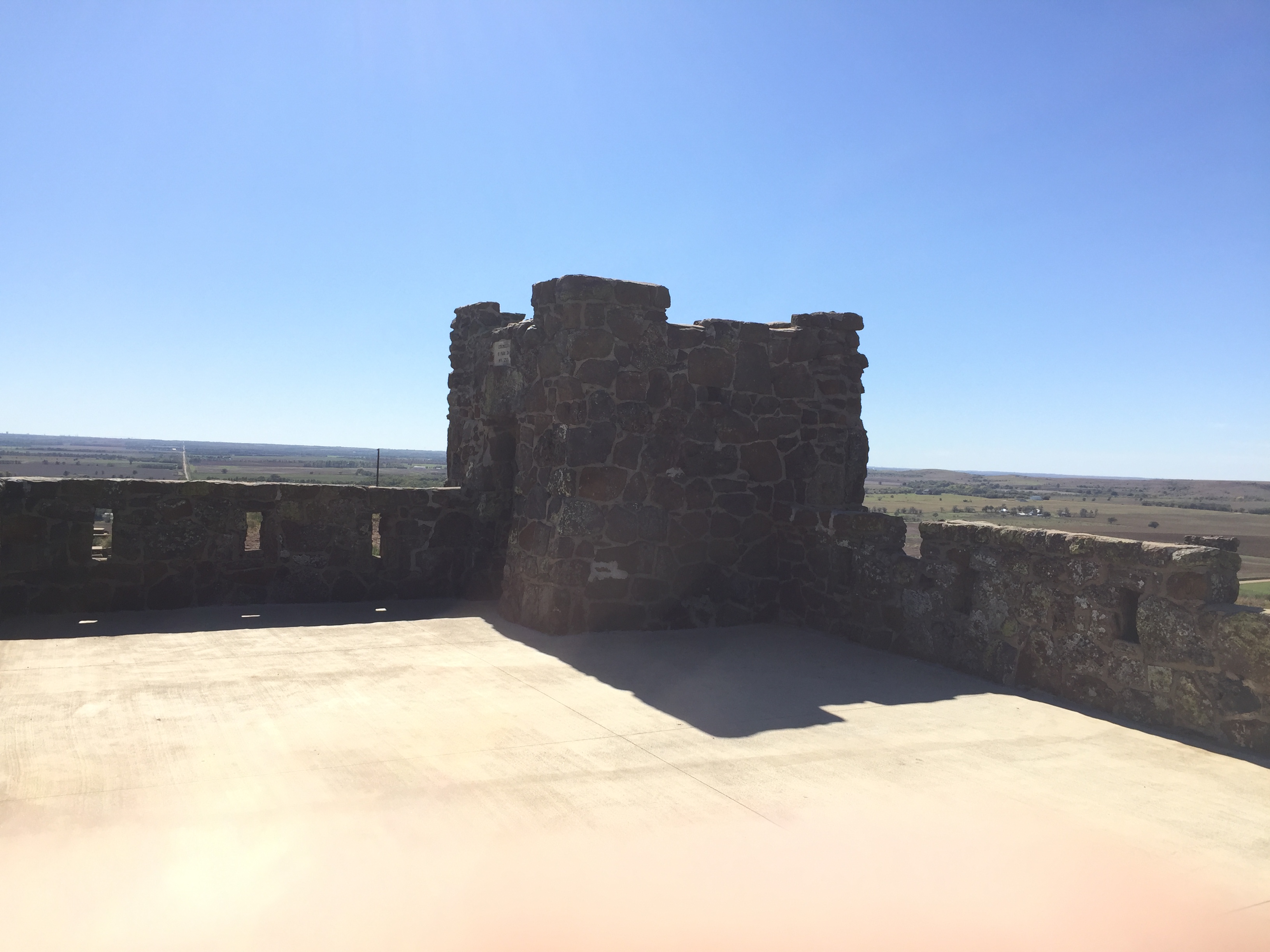 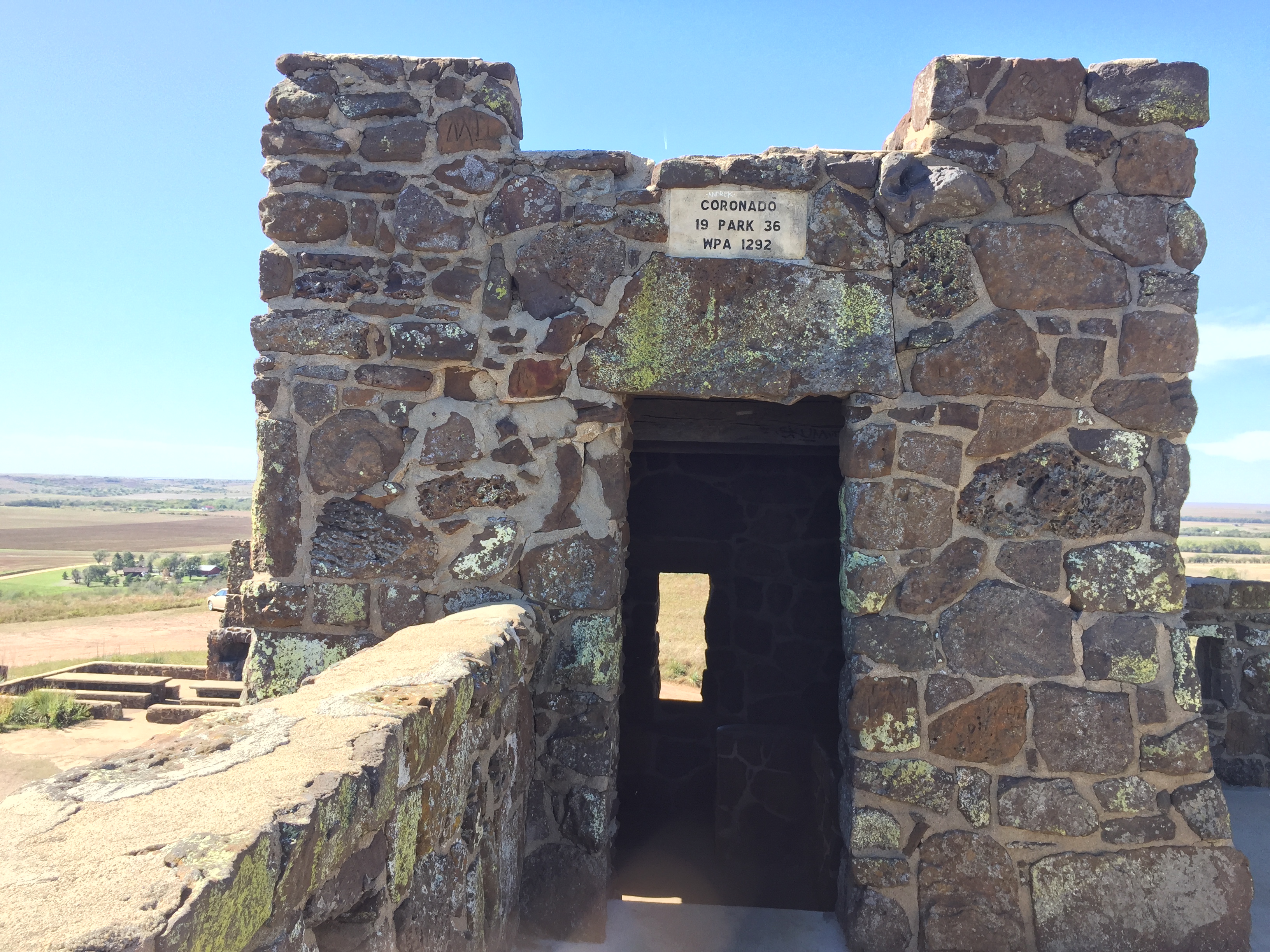 View from the castle roof facing the southeast. 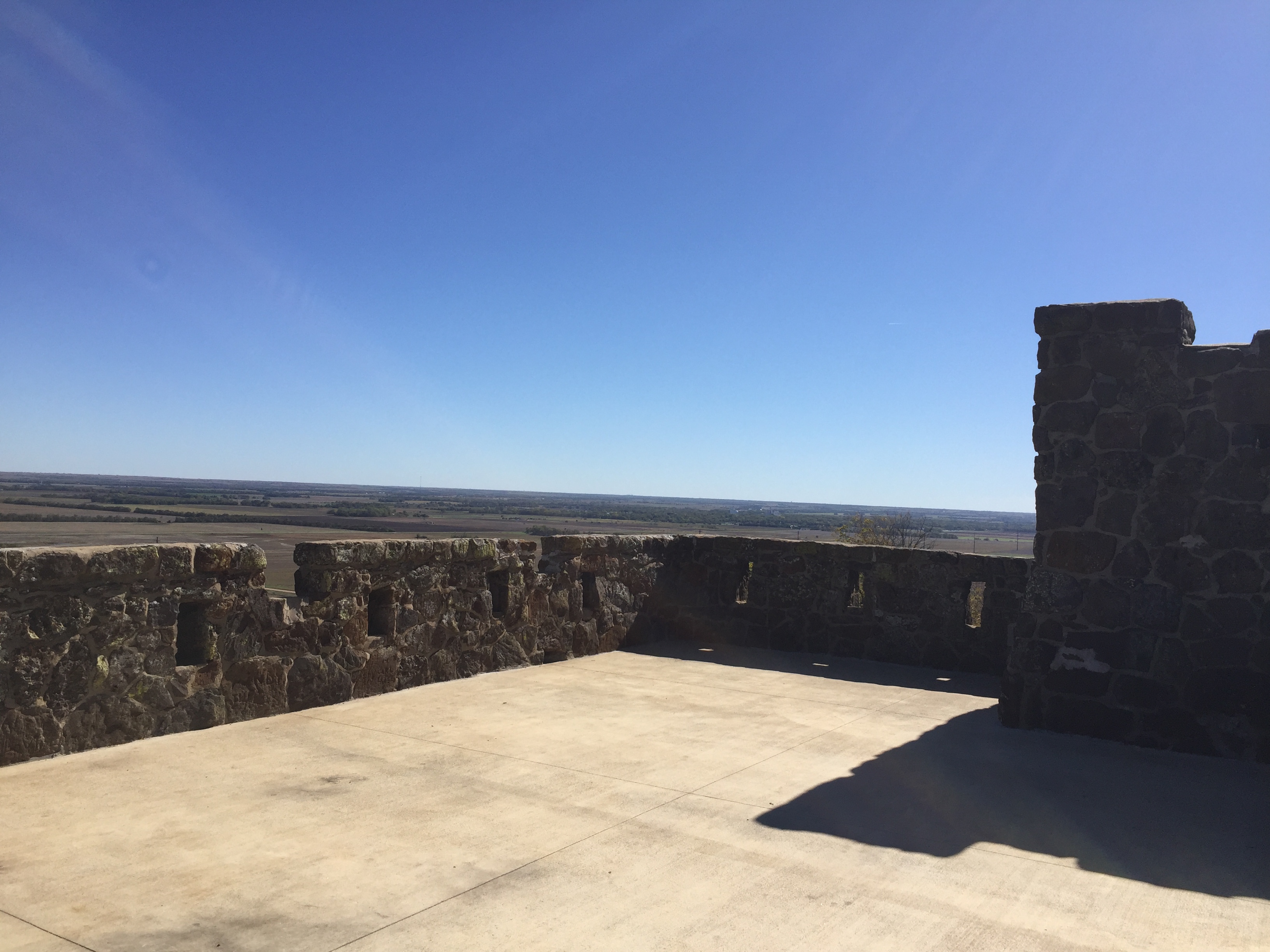 One of the many scenic views Coronado Heights has to offer. 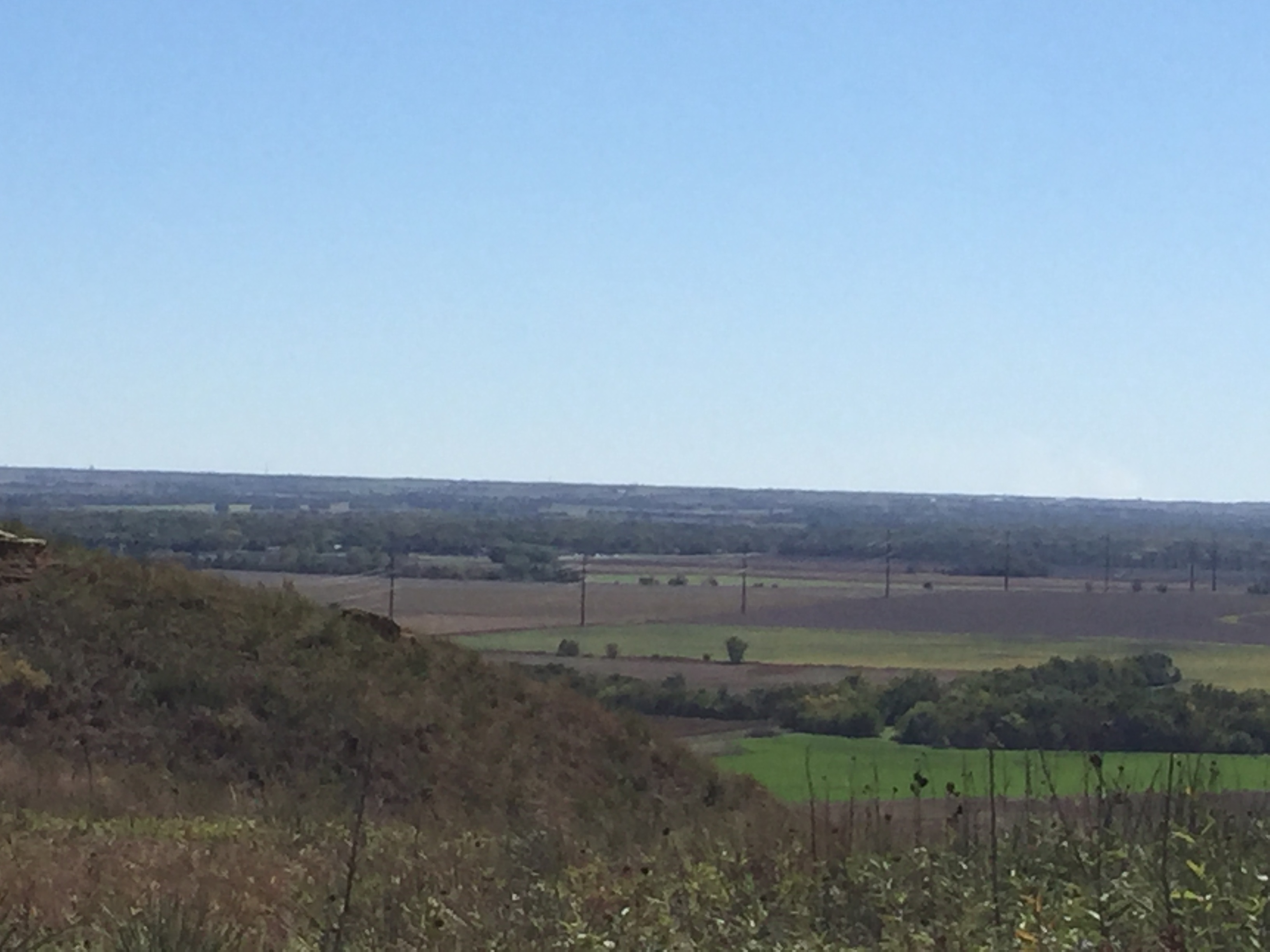 Exterior view of the castle from its completion in 1936. 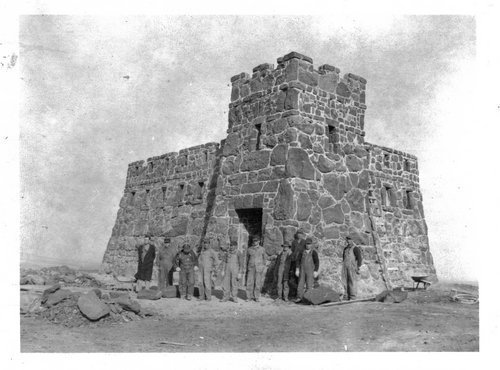 Map of Coronado's expedition. Found at the University of Texas at Austin Libraries.

Image of the statue that greets visitors to Coronado Heights. 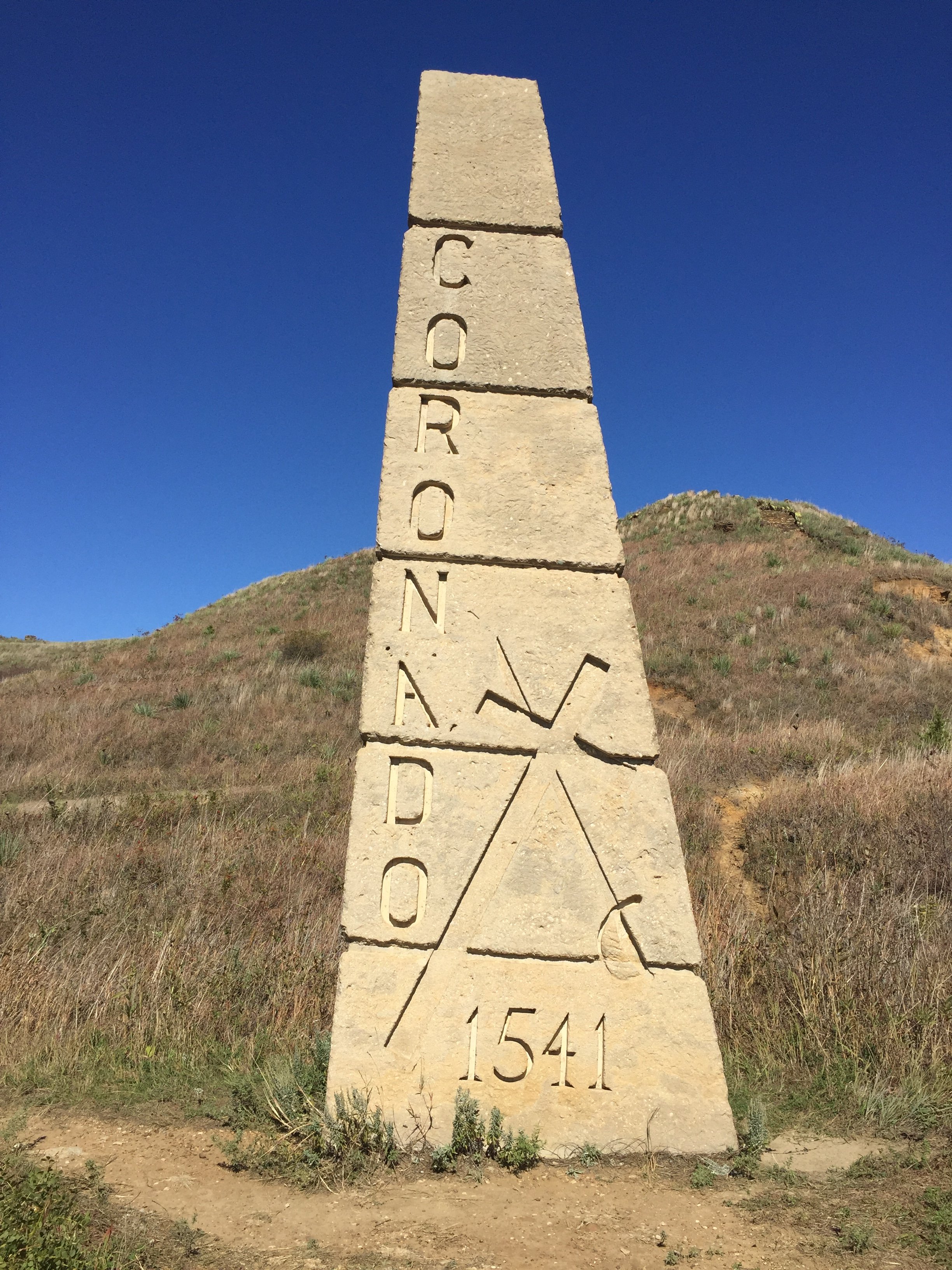 After hearing reports of reports of a “golden city on a hill” from friars returning from an expedition, on February 23rd, 1540, Vázquez de Coronado set out from the Compostela region—what is now northwest Mexico—in search of the mythical Seven Cities of Gold. Between 1540 and 1542 Vázquez de Coronado lead an expedition composed of roughly 400 European men (mostly Spaniards), four Franciscan monks, and 1,300-2,000 Mexican Native allies north into the regions of the United States. Relying primarily on reports from scouts and Native guides, Coronado’s expedition traveled across what is now Arizona, New Mexico, the Texas panhandle, and Kansas. During this journey, Coronado and his expedition marked the first European sighting of the Grand Canyon, the Colorado River, and engaged in peaceful as well as violent relations with multiple indigenous tribes (Zuni, Hopi, Pawnee, Wichita, and Apache).

Towards the end of the expedition, Coronado and roughly 40 others, were being lead north by Native guides toward Quivira, one of the rumored Seven Cities of Gold. After reaching Quivira in 1541, Coronado didn’t find a city of gold, but instead found himself in what is now central Kansas near the town of Lindsborg. Located roughly three miles northwest of Lindsborg is Coronado Heights, the southernmost bluff of the Smoky Hills that roughly 300 feet above the Smoky Valley floor. Because it is the highest point in area, it is alleged that Coronado climbed to the summit of the Heights to survey the region and eventually abandon his expedition for Quivira, returning to Mexico. Before leaving, Coronado remarked in his journal that the valley in Quivira region contained fertile soil, and would be perfect for growing grapes. Coronado and the remainder of his expeditionary force would make it back to Mexico in 1542, but not without leaving their mark on Coronado Heights, the Smoky Valley, and the greater Southwest.

In 1869, more than 300 after Coronado’s expedition, Swedish immigrants led by Olof Olsson settled near the foot of the Smoky Hills and Coronado Heights, establishing the town of Lindsborg. In 1915, J.A. Udden, a professor at Lindsborg’s local college—Bethany College—found chain mail from Spanish armor near the Coronado Heights. In the years since, others have found Spanish coins, a bridle, wood crafts, and lead bars dating back to the 16th century. In 1920, the Lindsborg Historical Society—now the Smoky Valley Historical Association—purchased Coronado Heights as a park, building a road to the top. In 1936, the federal government sponsored Work Progress Administration (WPA) built a castle, as well as multiple eating and cooking areas, on top of the Heights honoring Coronado’s expedition. In 1988, a sculpture by local artist John Whitfield was placed half way up the road of the Heights. The sculpture bears the words “Coronado,” “1541,” and the phrase “A place to Share,” as well as a cross, and sword. Because of this historical significance, as well as being a bluff formed prehistoric sea life that exposes 230 million years of ecological prehistory, Coronado Heights is listed as one of the “8 Wonders of Kansas Geography” by the Kansas Sampler Foundation.

Created by Jordan Christiansen (Instructed by Dave Tell, University of Kansas) on November 8th 2017, 2:35:21 am.