Constructed in 1900, this building was first the home of the University of Kansas' Chemistry Department. It is the namesake of famed University of Kansas professor of chemistry E. H. S. Bailey, formally attaining that status in 1935 according to University of Kansas historical record. Bailey is most well-known for developing the "Rock Chalk Jayhawk" chant. The Chemistry department has long since vacated the building. In its place, departments with a focus in humanities and social sciences moved in. The building entered the Register of Kansas Historical Places and the National Register of Historic Places in 2001. 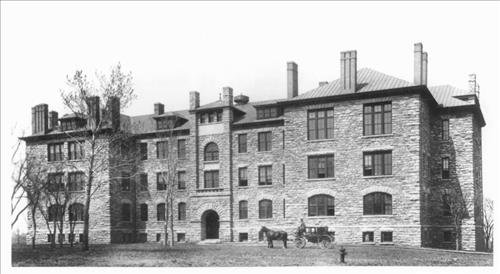 Bailey Hall from behind

Registry of departments in Bailey Hall

4th floor views from Bailey Hall, from which you can see KU's Memorial Stadium.

A plaque celebrating the discovery of helium in natural gas from the American Chemical Society.

Former Kansas state architect John Haskell did not design Bailey Hall with an intention for splendor.1 As time passed, however, this building housed a number of people and academic departments iconic to the University of Kansas. These icons, throughout time, lent Bailey Hall their status as they diligently toiled in its walls. In so many ways, thanks to the successes of those people and departments, Bailey Hall stands as an iconography of sorts, a visible monument to those who called it home. That list includes Professor E. H. S. Bailey and the Chemistry Department, the School of Education, and most recently, the College of Liberal Arts and Sciences.

After construction completed in 1900, then-named Chemistry Hall served as the newest home for the chemistry department. The building "replaced KU's first chemistry building, which had been designed for seventy-five students and was soon overcrowded."2 Bailey Hall rectified those issues, giving the chemistry department enough room to expand as needed, as well as, at the time, the "best practical conditions for chemical and pharmaceutical work, according to modern methods.”3 As KU was one of the first to invest in this sort of research, Bailey Hall's top-notch resources allowed for their program to attain national distinctions.4

Chemistry Hall at first had no resplendent historically significant person, nor wealthy donor, on which to base its heritage. For the first few years of its existence, it merely went by the simple name of "Chemistry Building. Only after years of being informally known as "Bailey's Barn" was it officially "christened as Bailey Chemistry Laboratory."5 During this time, a number of scientific breakthroughs were made; "perhaps the most lastingly significant achievement to come out of "Bailey's Barn" was the 1905 discovery of helium in natural gas by KU chemistry professors Hamilton P. Cady and David F. McFarland."6 In 1935, "Bailey's Barn" would officially be named after the famed professor, celebrating both his achievements in chemistry and social contributions to KU.

The 1950s would signal some significant changes for "Bailey's Barn." In 1954, the Chemistry Department was moved to yet another new home in newly constructed Malott Hall. Soon after, the building underwent over $600,000 in renovations--12 times its original cost!7 After renovations were completed in 1956, the School of Education called Bailey home, and would for another 44 years. Its current inhabitants--departments from the College of Liberal Arts and Sciences--moved in during the 2000 academic year. Now, Bailey is home to Communication Studies, African and African American Studies, American Studies, Humanities, and a number of other important social scientific/humanistic departments.8

Shortly after this move, its historical significance was recognized by both the state of Kansas and the nation. In 2001, the Kansas Historical Registry and the National Register of Historic Places recognized Bailey Hall.9 These registries highlighted the importance of Chemistry Hall's storied past. Even though Haskell's Romanesque design was never meant to turn heads, the people that have inhabited this space, the accomplishments they have made, and the national recognition it has gained certainly will.