Stalnaker Hall (Woman's Hall) is a historic dorm building on the downtown campus of West Virginia University. The construction of Woman's Hall represented a shift in students lodging. Beginning in 1919, female students were able to relocate from area boarding houses to residence halls. In 1972, Woman's Hall was renamed Stalnaker after Elizabeth Mattingly Stalnaker. It was added to the National Register of Historic Places (NRHP) on December 19, 1985. 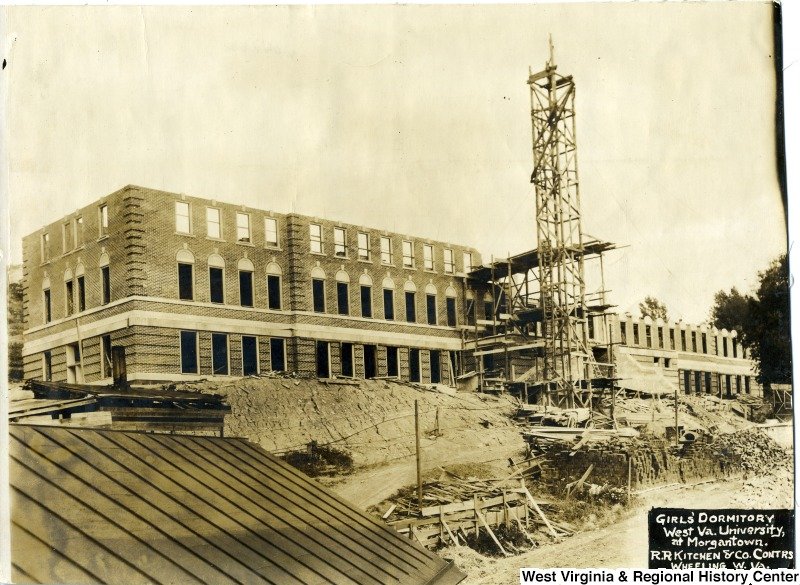 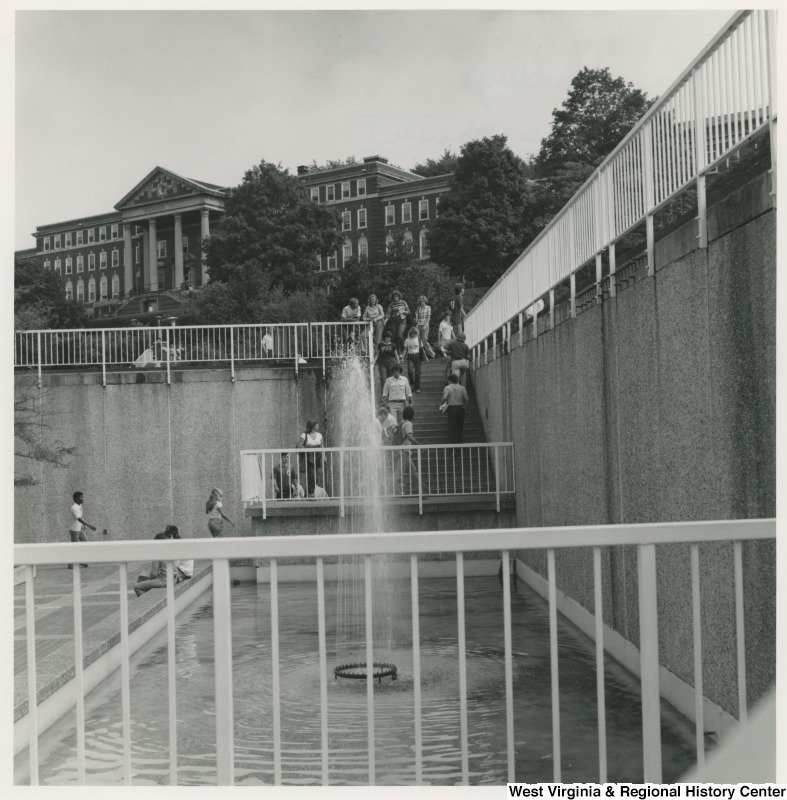 The top portion is an aerial view of Stalnaker from 1952, while the bottom is a recent Google map satellite view of Stalnaker. Photo courtesy of the West Virginia and Regional History Center. 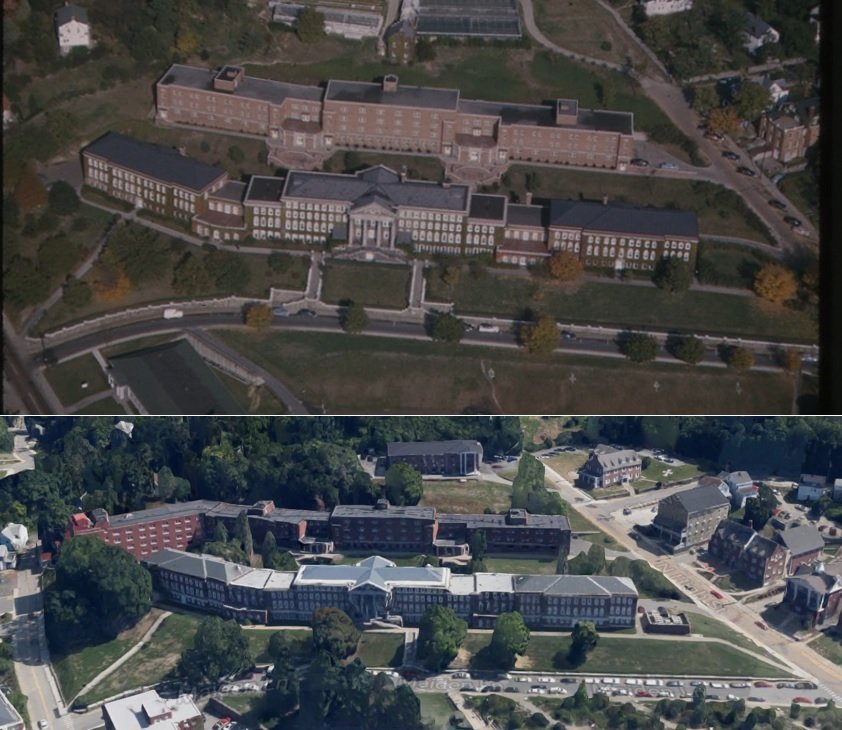 Stalnaker as viewed from Maiden Lane in the past. Photo courtesy of the West Virginia and Regional History Center. 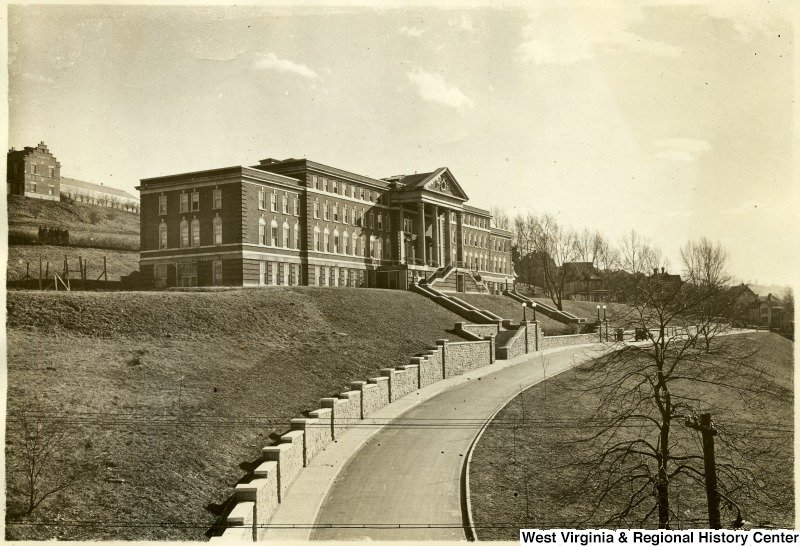 Stalnaker Hall in 2016. Photo courtesy of the West Virginia and Regional History Center. 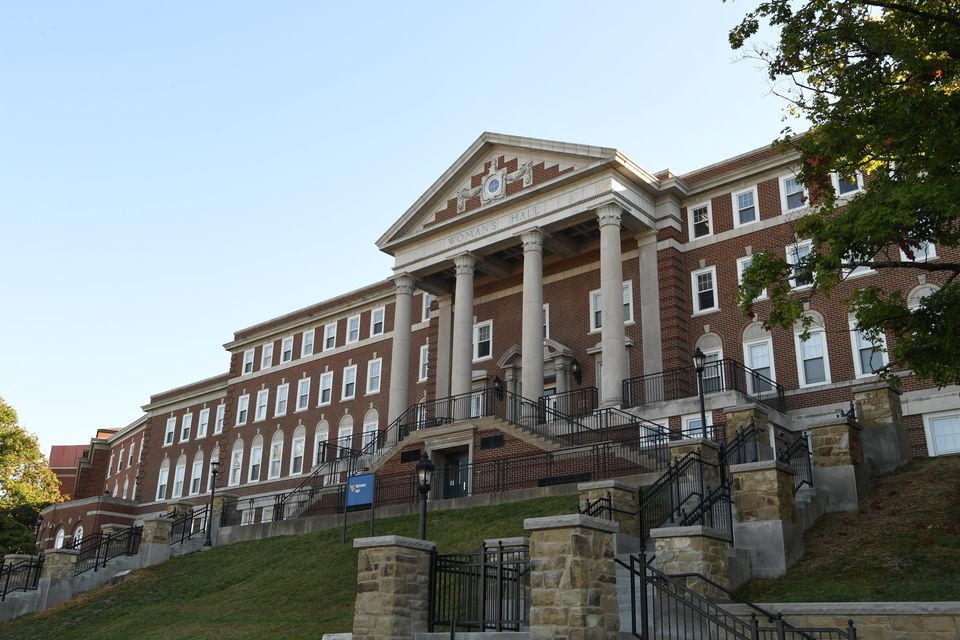 From the time West Virginia University was founded in 1867 until the construction of Woman’s Hall, students lived in boarding houses. They had to pay room and board as students do now. WVU was able to regulate the activities of the women students better with the opening of the first residence hall- Woman’s Hall. Before, the university required operators of the boarding houses to enforce curfews and have women sign in and out from wherever they were going to ensure they were not out too late or places they should not have been.1

Woman’s Hall was the solution to multiple attempts to provide housing to women as their enrollment increased. Before Woman’s Hall, dorm space was provided in Dr. P.B. Reynolds' house (on what is now Campus Drive) starting in 1902. The house was only able to hold fourteen students and thus it was necessary to look into alternate student housing. Much of the housing at the time was being used by industrial workers at the factories. Minimal funding at the time did not allow for the construction of a residence hall. Thus more dormitory space was leased for women at the Episcopal Hall in 1907 located at the Spruce and Willey intersection. Forty-two students were housed here. In 1918, the university was finally able to build and complete Woman’s Hall accommodating over 200 students.

In 1920, Maiden Lane street was opened in front of Woman's Hall.2 Additions (two wings) were added to the building in 1935 and over the years modernizations have been made. The architecture of the building follows the popular period design of Neo-Classical Revival. The inclusion of columnns and triangular shapes show the Greek influence in the design. American bond brick is laid across the exterior of the building. The original section is connected to the added annexes in a terraced effect. The roof is flat. Woman’s Hall to this day is etched into the concrete on the front exterior of the main entrance. The exterior building is decorated with keystones atop the windows and concrete work, as well as arches included in various aspects of the design. Inside are long hallways with rooms on either side and lounge areas in the center section. A dining hall was placed in the basement of the center section. Over the years, it has continued to function and holds the name of Terrace Room today. Few changes have been made to the construction of the dining area.3

In 1972, Woman’s Hall acquired the name of Stalnaker Hall after Elizabeth Mattingly Stalnaker. Stalnaker started in the department of education. In 1927, the College of Education was formed out of the department in order to provide more teachers for West Virginia. The department served to prepare professionals for public education. When it was formed, the education department staff moved to the College; however, Stalnaker was transferred to the philosophy and psychology department as a professor.4 She was well-respected throughout the university. She had left almost $500,000 to WVU to dispurse to students.5

Woman’s Hall continued to operate as a woman’s dorm. In 1984, due to problems in structure, fire code violations, and a decrease need for housing- the center section of Woman’s Hall was closed until renovations could be made to reopen it. Now, Woman’s Hall operates as a dormitory for all undergraduate students including males.6

Photograph Citations in Order of Appearance: