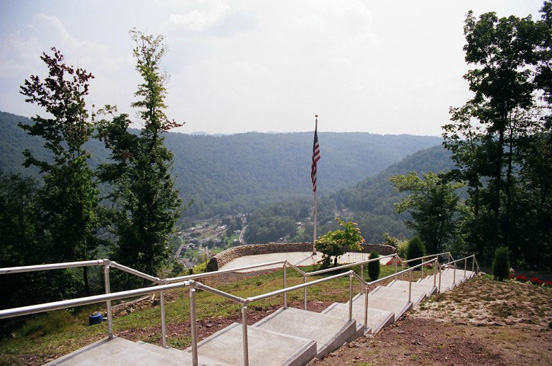 The Cheat River Bridge in 1870. Courtesy of the Rowlesburg Tourism Commission. 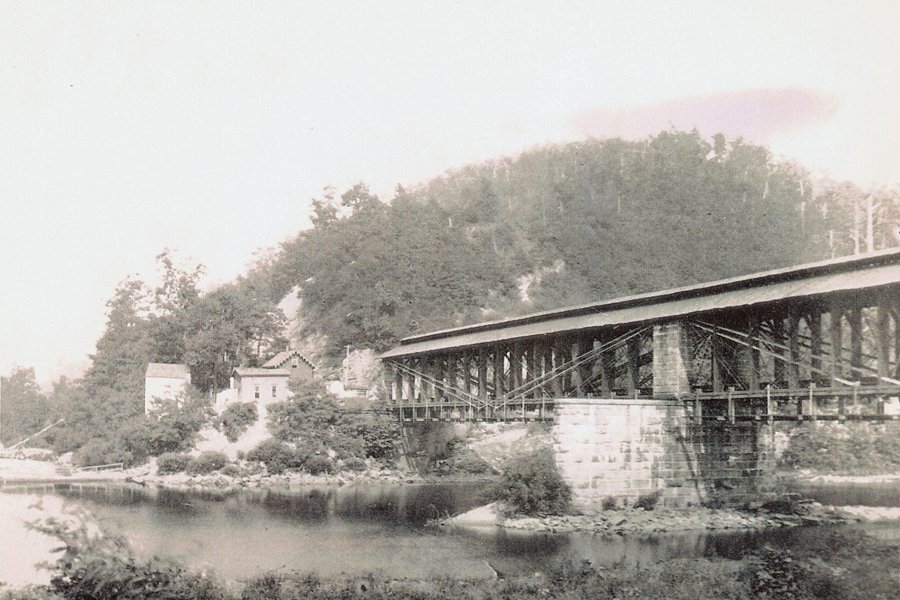 A print of the Tray Run Viaduct featured in the London Times. Courtesy of the Rowlesburg Tourism Commission. 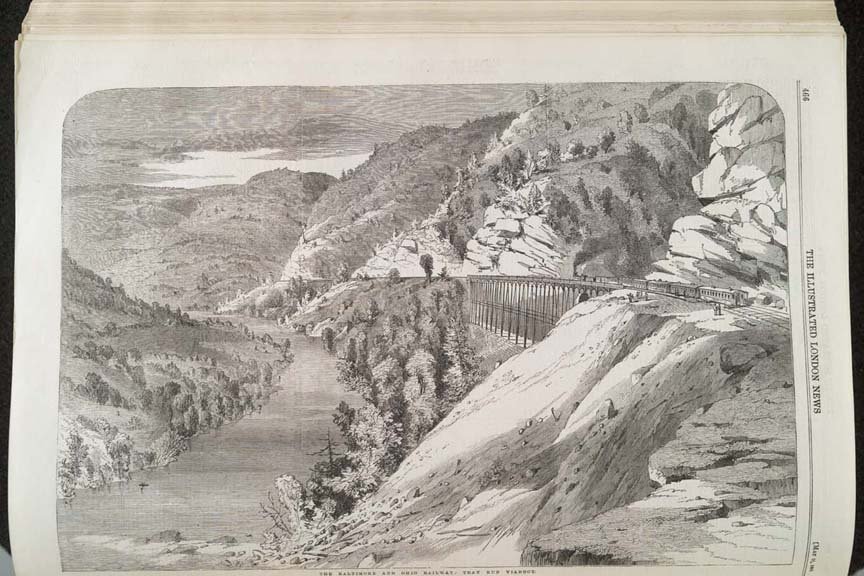 Confederate forces under Generals William E. Jones and John D. Imboden entered what was then still western Virginia in the spring of 1863 with the aim of disrupting rail operations across the region and delivering a crippling blow to the pro-Union government in the city of Wheeling. The invasion was a two-pronged attack, with half the raiders under Jones targeting Baltimore & Ohio railroad lines between Grafton, West Virginia and Oakland, Maryland and the other half under Imboden aiming for the towns of Beverly, Philippi, and Buckhannon. The raid experienced considerable success, destroying several bridges and an oil field. It stalled, however, when Jones attempted an assault rail lines traversing Cheat River outside the town of Rowlesburg. Eventually, after hours of trying unsuccessfully to dislodge the Federal troops and townspeople defending the lines Jones retreated west, where he reunited with Imboden en route to Philippi. Ultimately, Jones’ inability to topple the bridges near Rowlesburg prevented him from effecting his goal of severing the link between Federal forces in the east and west and destabilizing the region’s Unionist government. That failure, in turn, allowed pro-Union forces to survive long enough in the area to become representatives of their nation’s newest state later that year. In recognition of the site’s importance to local, state, and national history as the location of a strategically important battle during the Civil War, the town’s residents have preserved the hill as a local park and currently offer tours of the site from May to October through the Rowlesburg Area Historical Society as well an annual reenactment of the 1863 battle.

The Rowlesburg area during the American Civil War was the site of two strategically important railroad bridges in the Unionist counties of western Virginia: the Cheat River Bridge and Tray Run Viaduct, both north of town. These bridges served as vital links through the ridges and valleys of the Allegheny Mountains that traverse the area, forming part of the extensive infrastructure of the Baltimore & Ohio Railroad that connected Washington, D.C. to the northern and western reaches of the nation. Although B&O executive John W. Garrett initially endeavored to retain his company’s neutrality after the secession of the southern states in 1861, pressure from U.S. President Abraham Lincoln ultimately ensured that the railroad played a central role in the transport of troops and supplies between east and west during the conflict. As a result, Confederate leaders like Jefferson Davis and Robert E. Lee considered the disruption of the company’s railways of prime importance to the secessionist war effort. This was particularly true of western Virginia, which had operated under a provisional Unionist government from the beginning of the war and threatened to secede from its home state entirely in short order. The bridges at Rowlesburg held the key to such designs: by destroying them, Confederates could cease rail traffic all the way to the Ohio River, itself a vital thoroughfare from north to south. With this in mind, Confederate raiders under Generals William E. Jones (known by his men as “Grumble” for his notorious temper) and John D. Imboden entered western Virginia in late April of 1863, intent upon disrupting the region’s railways and gathering much-needed men and supplies in the process. Jones and his men arrived to the area of Rowlesburg five days later, on the morning of April 26th.

After reaching the area, Jones split his forces into two groups. One, composed of less than 100 dismounted cavalrymen under Captain Octavius T. Weems, approached Cheat River Bridge over the summit of Palmer’s Knob on the northern side of the river. The other, under Colonel John S. Green, marched parallel to the river on what is now U.S. Route 72. The town’s residents and small 220-man garrison under Major John Showalter received advanced warning of Jones’ approach, however, and had managed to reach their defensive positions on both Cannon Hill overlooking the bridge and across the road in time to eliminate the element of surprise. Those defenses consisted of a small cannon positioned on the crest of the hill (hauled there in 1861 by local resident Peter Wotring and a team of oxen) and a barricade constructed from railroad ties blocking the road along the river. Showalter stationed riflemen around and behind both of these positions, in addition to camouflaging a number of detachments between small crests and gullies in the surrounding area where they could lie in wait for the Confederates’ approach. The attack under Weems began around 2:30 in the afternoon and ended shortly thereafter with its repulse by sharpshooters hidden from the rebels’ view by a railroad embankment and the cannon positioned above them. Meanwhile, the assault along the river stalled for several hours, with Union and Confederate forces exchanging fire off and on throughout the afternoon. Ultimately Jones chose to lead a charge against the position himself, an attack that – like its predecessors – ultimately proved unsuccessful. As dark approached Jones ordered the retreat of his men westward, where they eventually reunited with their compatriots under Imboden outside Philippi.

Jones’ failure to destroy the bridges near Rowlesburg enabled the Federal government to continue transporting valuable men and supplies from the northeast to the south and west by preserving a key link in the railway infrastructure between those regions. As a result, pro-Union forces were able to gradually cement their control not only over western Virginia but over towns and regions that stretched from New Orleans to the Chesapeake. Without the Baltimore & Ohio Railroad, the Union’s efforts to do so would have been severely damaged, as would its ability to wage war from the Mississippi River to the Chesapeake Bay. The Battle of Rowlesburg thus represents a pivotal moment in history that helped to determine the fates of both the state of West Virginia and the nation. Visitors interested in exploring this history for themselves can access Cannon Hill Park throughout the year, arrange guided tours by members of the Rowlesburg Area Historical Society from May to October, and attend the town’s annual reenactment of the battle every spring.