Founded in 1855 by Harvey D. Parker, the Omni Parker House is a historic hotel in downtown Boston. The hotel, which is located near the Boston Common along the famous Freedom Trail, is the oldest continuously operating hotel in the United States. Today, the Omni Parker House has 551 guest rooms, full service restaurants, and is a popular site for weddings. 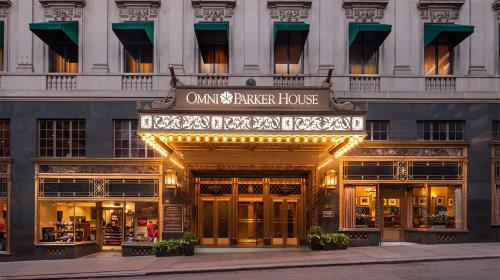 In colonial Boston, taverns, taprooms, and inns provided men on the road with a place to stay during business. The taverns served as key meeting points during periods of political unrest, particularly during the American Revolution. As more travelers arrived in Boston during the mid-19th century, the taprooms developed to accommodate more lodgers and became known as “houses.” The Parker House was developed out of the shift from taverns to dining houses and has since been a site for many important Boston and Massachusetts events. In 1832, before he established the lodging house, Harvey Parker bought a restaurant that was to be called simply, “Parkers.”

The Parker House changed the way that American hotels operated by diverging from the traditional norms of other lodging facilities. Parker was the first to offer meals continuously throughout the day, rather than at fixed intervals. He also changed the way the billing system worked, by following a model that was called the “European plan,” which separated bills for food and lodging. He focused on good service and excellent food in order to attract regular high-status clients such as businessmen, lawyers, and newspapermen.

The Parker House played an important role in both the history of Boston and the state of Massachusetts. The hotel held the monthly meetings of the Saturday Club, an informal meeting of writers, philosophers, historians and scientists. Prominent members of the Saturday Club included Henry Wadsworth Longfellow, Ralph Waldo Emerson, Nathaniel Hawthorne, and Oliver Wendell Holmes. Charles Dickens lived at the Parker House for two years and gave his first public reading of “The Christmas Carol” at a Saturday Club meeting.

The hotel has also been site to many major political figures and their important events. Politicians, such as Ulysses S. Grant, James Michael Curley, Franklin Delano Roosevelt, and Bill Clinton held meetings, press conferences, and breakfasts at the House. John F. Kennedy announced his bid for the U.S. Senate, held his first public speech, and even proposed to Jacqueline Onassis at the hotel. Ho Chi Minh, a Vietnamese communist revolution leader, worked as a pastry chef and Malcolm X, Nation of Islam member and human rights activist, worked as a bus boy. John Wilkes Booth also stayed in the Parker House while visiting his brother in Boston the week before he assassinated President Lincoln.

The hotel was the home to many great culinary creations. The Massachusetts State Dessert, the Boston Cream Pie, was perfected in 1856. The lemon meringue pie was also improved in the Parker House. The famous Parker House roll was created by an in-house German baker named Ward, who developed a roll that did not have a crust. The rolls were packaged and shipped across the country during the nineteenth and twentieth centuries and continue to be replicated today.

The Omni Parker House is an important memory site with no shortage of history. The Boston lodging house offers a glimpse into local, state, and national histories across political, social, and culinary disciplines. The Omni Parker House remains one of the most popular Boston hotels and provides historians with an opportunity to discover a lot of history in one small area.