At the corner of Tyler Street and Beach Street, a historical marker notes the spot where, in 1761, a slave ship carrying seven or eight year old Phillis Wheatley docked at Beach Street Wharf. The young girl was sold into slavery. She was ill and did not speak a word of English. Just twelve years later, she would go on to become America's first published African-American woman. 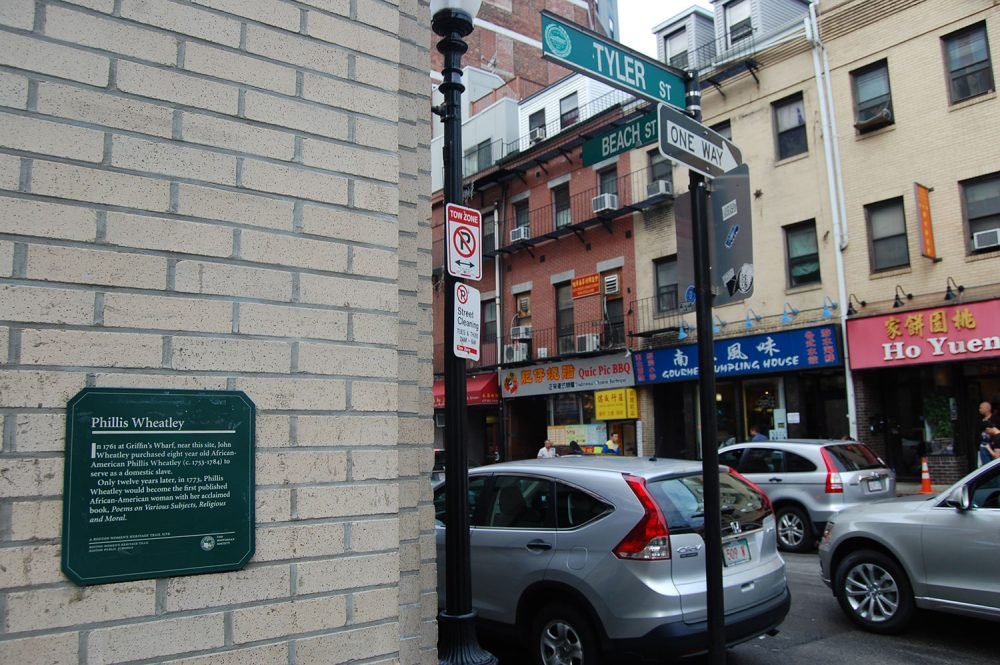 Phillis Wheatley was born in an unknown location around Senegal or Gambia around 1753. She was kidnapped in 1761 and put on a ship headed for America where she would be sold into slavery. On July 13, the ship docked in Boston and Wheatley, a sick young child, was purchased by John Wheatley, a wealthy merchant, as a gift for his wife, Susanna. Wheatley's intellectual curiosity was quickly evident and by most accounts, supported by the Wheatley household. Susanna and John’s daughter, Mary, instructed her in subjects such as: English, Latin, the Bible and astronomy. Wheatley, possibly because of her poor health and Susanna's affinity for her, was never forced to perform domestic housework. Wheatley published her first poem at age 13, when Susanna submitted it to the Newport Mercury on her behalf.

Wheatley was the first African American woman and the first slave to publish a book of poems. She had to go through an arduous process in order to get her book published. Eighteen of the most influential intellectuals in Massachusetts assembled to verify whether or not it was possible a female slave could have written such work. John Hancock was among them. Many of them were Harvard graduates and most were slave owners. All were men. No transcripts remain of what occurred when she brought her book to that panel, but they came to the conclusion that it had, in fact, been written by her.

Even when Wheatley's book was approved by the panel, no American publisher wanted it. Susanna Wheatley turned to her friends in England where the climate was slightly more amicable to Black authors. Wheatley’s book, Poems on Various Subjects, Religious and Moral, was published in 1773 after she received patronage from Selina Hastings, an English countess.  Wheatley traveled to London to oversee the book’s publication. It is also likely that she traveled there because a law had recently been passed in England stipulating that slaves who traveled to Britain could not be forced to return to the colonies as slaves. Wheatley did end up returning to Boston and the Wheatley family freed her. After the publication of Wheatley's book, English reviewers pointed out the hypocrisy of the Americans in wanting freedom from England but not granting it to its own people.

Wheatley also penned several poems about the American war for independence, addressing one directly to General George Washington, who invited her to visit him at his headquarters in Cambridge, Massachusetts. She accepted his offer and visited him in March 1776. However, while she was a supporter of the independence movement, she remained a critic of the continuation of slavery in the new republic.

Wheatley wrote extensively about the evils of the slave trade and encouraged the work of other Black artists. She wrote letters to her contacts in England, including the Earl of Dartmouth and the English philanthropist John Thornton, in support of abolition. The influences on her poetry were numerous and included both writers like Alexander Pope and Thomas Gray and elegy that may have come from her African roots. Her poems utilize Christianity, classicism and sun worship. It is believed that the sun worship she discusses in her poems (an element that also traces back to her African roots) is a double entendre for Son, a reference to Christ. Her early poems base her ideals of equality on theological grounds, but her later correspondence shows she grew increasingly interested in political theory and the idea of natural rights.

Most of Wheatley’s life after 1776 is unknown. When John and Susanna Wheatley died, they did not leave her anything. In 1778, Wheatley married a freedman named John Peters. Theirs was not a happy marriage, and he abandoned her after she gave birth to their third child. The first two children had died in infancy. Wheatley died in 1784, along with her baby. It is thought that Peters had the only other copy of Wheatley's manuscript and that he sold it. One poem from that manuscript has surfaced. The rest remains lost.

Wheatley continued to be a symbol for the abolitionist movement long after her death. Her poems were used to demonstrate a shared humanity between Wheatley and her white readers. Her poems helped refute racist arguments and show the literary talents of people of African descent.

The historical marker denoting the place where Wheatley was sold into slavery was put up by the Bostonian Society, a non-profit organization founded in 1881 for the preservation of the Old State House in Boston. The marker is now a part of the Boston Women's Heritage Trail.