This monument, which was dedicated on September 19th, 1995, pays tribute to the men and woman who lived in Winthrop and went on to fight in World War II, Korea, Vietnam and the Gulf War. It stands in the middle of Metcalf Square, which is right next to town hall in the center of the town.

Photo of the monument, which stands in the middle of Metcalfe Square in Winthrop, Massachusetts. On this monument is all the names of the men and woman from Winthrop who served in World War II, Korea, Vietnam War, and Gulf War respectively. 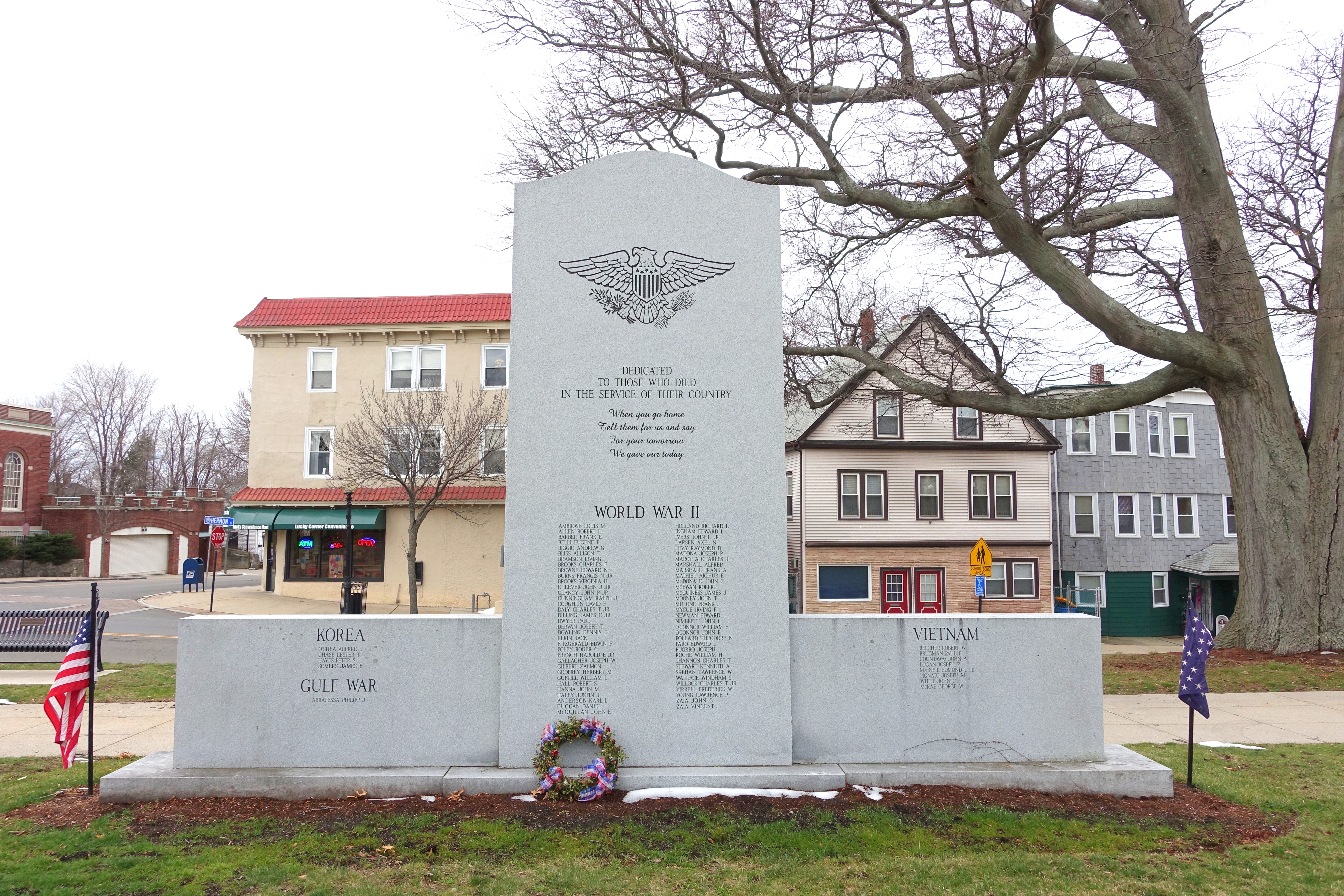 The monument reads:
"When you go home
Tell them for us and say
For your tomorrow
We gave our today"
The middle pillar has an eagle above it and holds the names of over 40 Winthrop residents who served and gave their lives in WWII 1. To the left and right of the main pillar there are slabs that honor those that died in the other wars such as the Korean, Vietnam and Gulf. The Korean slab has four names, The Vietnam slab has eight and the Gulf War has one.
Winthrop is a small town of only about one square mile. The town was responsible for sending over 100 soldiers to WWII alone. The size of Winthrop plays a role in this because even though the town is so small, it has sent a considerable number of soldiers to fight in foreign wars.

Once a year, Veterans will gather by the memorial and lay a wreath. Usually the local boy scouts will come and hold a ceremony. Hundreds of people show up the ceremony and it is a great sight to see. The links below include a YouTube video for the service held on Veterans day in front of the memorial. The memorial is in frame for the entire video.
The memorial has become a rallying point for veterans and their families to remember everyone that served. People will go and pay their respects to all veterans that lived in Winthrop, not just those etched into the stone. One example of this rallying would be the Bachini family. The Bachini's were a family that lived in Winthrop their whole lives. They had six sons and a daughter. All of the men in the family went on to enlist in the military. The family uses the monument as a meeting place for a family reunion and to pay their respects to all the men that served.

A local cafe in Winthrop called Center Cafe also pays tribute to the town's veterans. Families bring in pictures of loved ones and give them to the owner to hang up. The pictures, newspaper clippings and war memorabilia fill the wall behind the tables and create a memory site for people to display their family members or friends that served in the wars. Another way that the town pays tributes to its Veterans is that they will put up plaques at intersections that will have the name of the soldier, which war they served in, and a little star.