The Battle of Atlanta was a major Union victory, both in military terms and on the fields of popular opinion. Morale in the North benefited greatly from extensive newspaper coverage of the fall of the large Confederate city, and the army of the Confederacy lost far more men than its weakened infrastructure could sustain.

The burned remnants of an Atlanta train station. 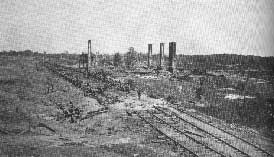 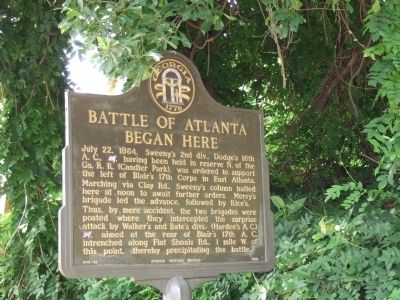 During his approach to the city of Atlanta, General William T. Sherman of the Union repeatedly engaged the smaller force of general Joseph E. Johnston. Johnston was a cautious commander, and the enemy far outnumbered his force, so he fought a series of delaying actions, hoping to weaken the approaching Union mass enough to force them away from the heavily-fortified Atlanta.

Confederate commanders, unfortunately, interpreted this as a reluctance to engage the enemy, and Johnston was removed from command in favor of the much more brash John Bell Hood. Hood immediately attacked the much larger Union force, but was repulsed in a costly defeat, losing an estimated 2,500 of his men.

Hood, his lust for combat tempered by caution, realized that he had little chance in the open against Sherman, and withdrew into the city of Atlanta, hoping to draw the approaching Union forces into the sights of defensive batteries stationed at various points.

As the Union approached, Hood split his forces: He ordered William J. Hardee to take his men on a march around the Union's left, attempting to flank them. Another force, under Joseph Wheeler, was to march on Sherman's supply lines, while a third division, under Benjamin Cheatham, would attack the Union front lines.

Hardee's force was detected moving past Sherman's army, and one of Sherman's subordinates, James B. MacPherson, reinforced that flank prior to the attack. The initial engagement resulted in Hardee's men being repulsed, but the Union flank began to retreat. MacPherson was killed during this skirmish.

Hours later, Wheeler failed to secure the supply trains during his attack before they could be moved from the town of Decateur, where they were camped. Wheeler retreated to Atlanta, knowing that since the Federal forces still had the majority of their supplies, his men would be needed in the city.

The remainder of the fighting that night was focused around an area known as Bald Hill, where Union and Confederate soldiers battled for control of the small rise. After repulsing the Confederate attack on the hill, Union forces settled in for a siege of Atlanta.

The Confederates had taken heavy losses during the fighting outside the city, losses that the weakened Confederate Army could not sustain. However, Atlanta still had intact supply lines from nearby Macon, which Sherman sent cavalry to cut off.

The cavalry was repulsed, and since Atlanta seemed to be resisting continued shelling, Sherman brought the main body of his army around, finally capturing the valuable railway and destroying it. Afterwards, he returned to Atlanta to find that Hood had set fire to every tactical resource the city possessed and pulled out of Atlanta.

A member of Sherman's staff met with leading residents of Atlanta and made arrangements for the protection of life and property in exchange for peaceful surrender. On September 7th, Sherman established his headquarters in Atlanta.

Throughout the following months, Sherman's forces regrouped and rested in Atlanta while waiting for further orders. Then, when Sherman received permission to advance, they burned the majority of the buildings in Atlanta (between 2500 and 3000 buildings were destroyed) and set out on the incredibly destructive total-warfare campaign that became known as Sherman's March to the Sea.