Located in the Bronx on the southern side of Britton Street between Barker and Olinville Avenues, the Zimmerman Playground stands as a memorial to Corporal Louis Zimmerman. Paid for by the War Memorial Fund, the park was one of nine War Memorial Playgrounds erected by NYC Parks and Mayor LaGuardia on July 15, 1934 intended to honor New York City natives killed in action during the Great War. In 1996 and 1997, the park was redesigned with handicap accommodations and refurbished equipment. Today, the playground remains a vibrant memorial and provides those in the Allerton community with the intended open space and family play areas. 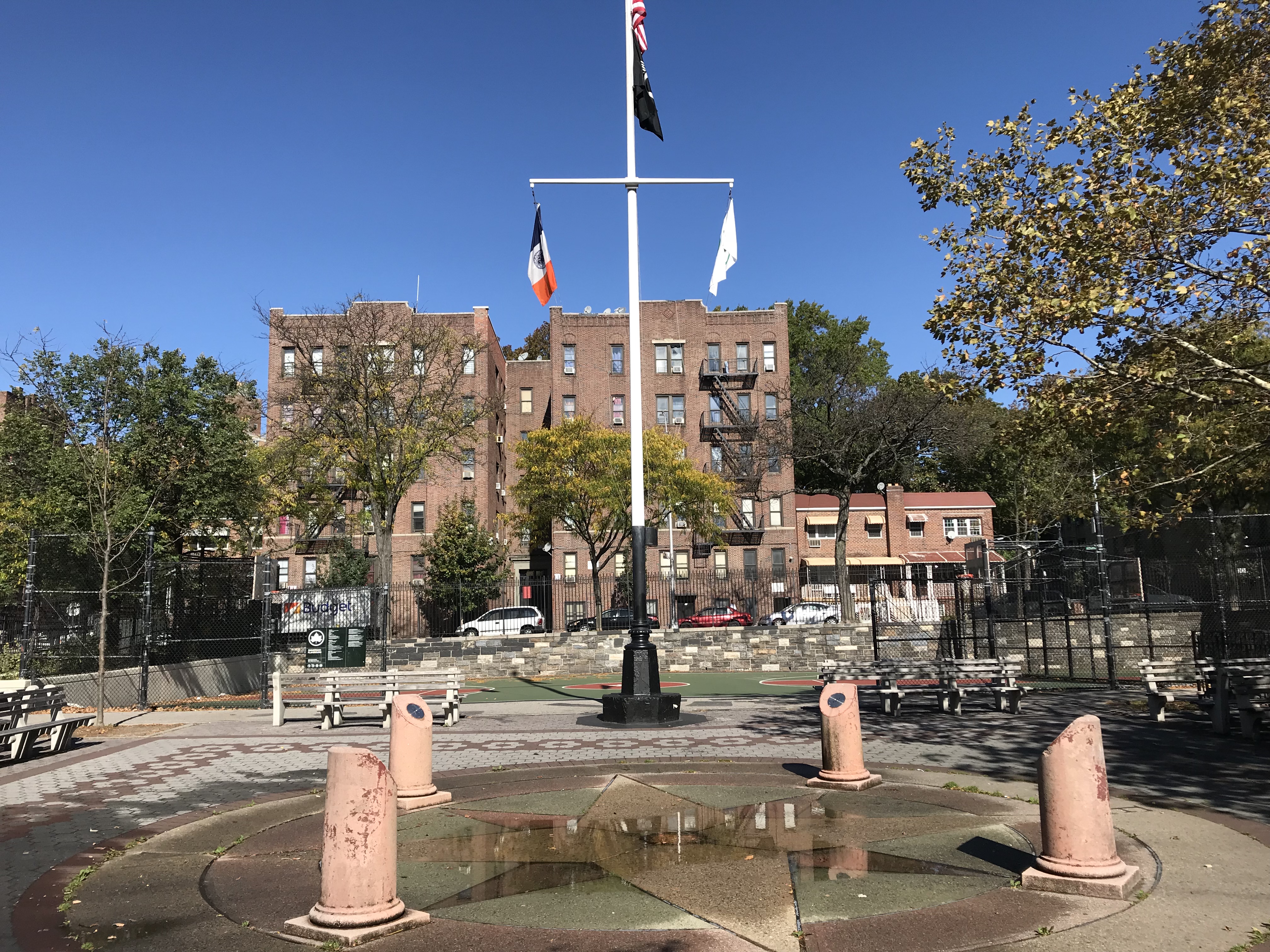 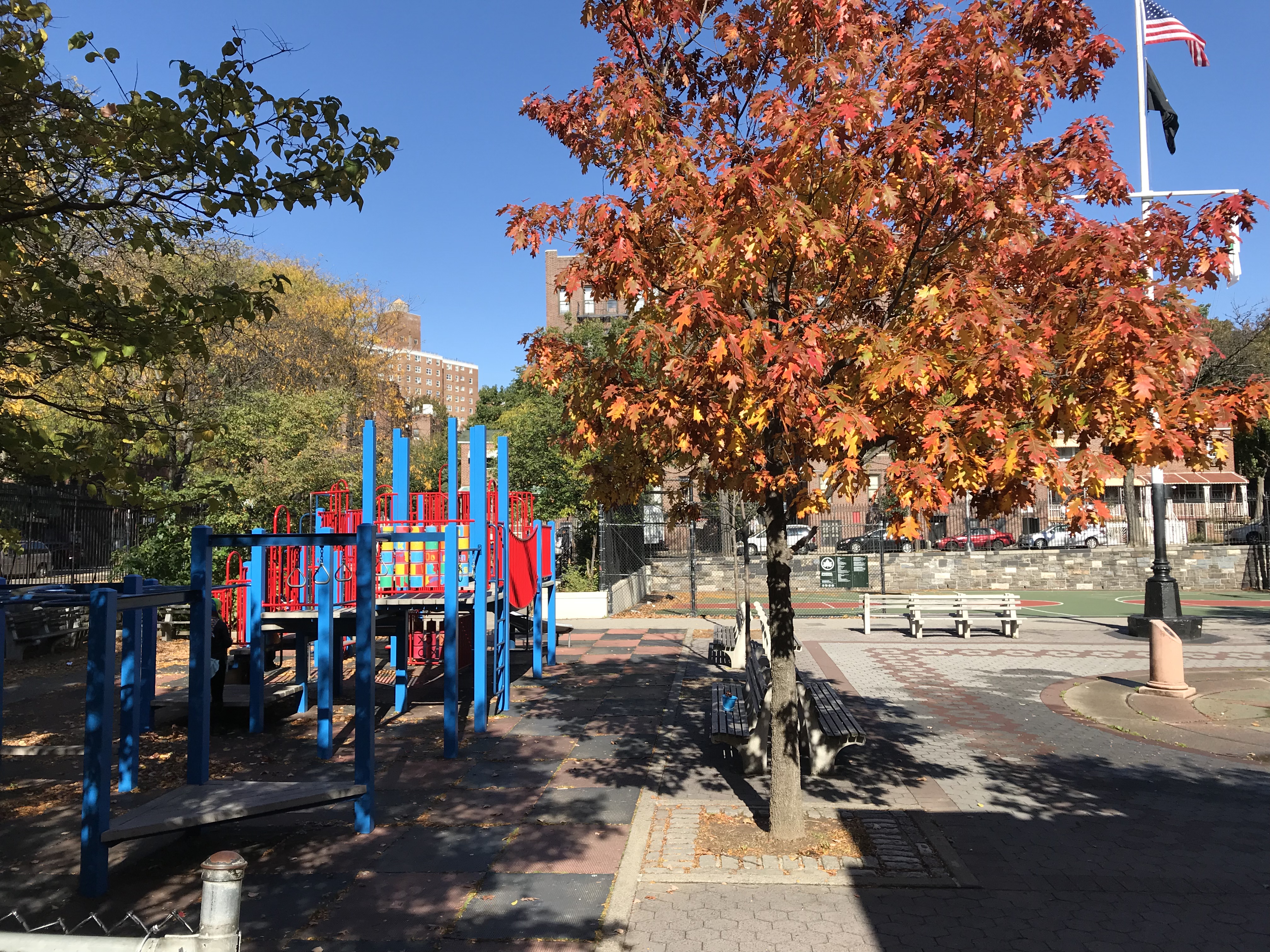 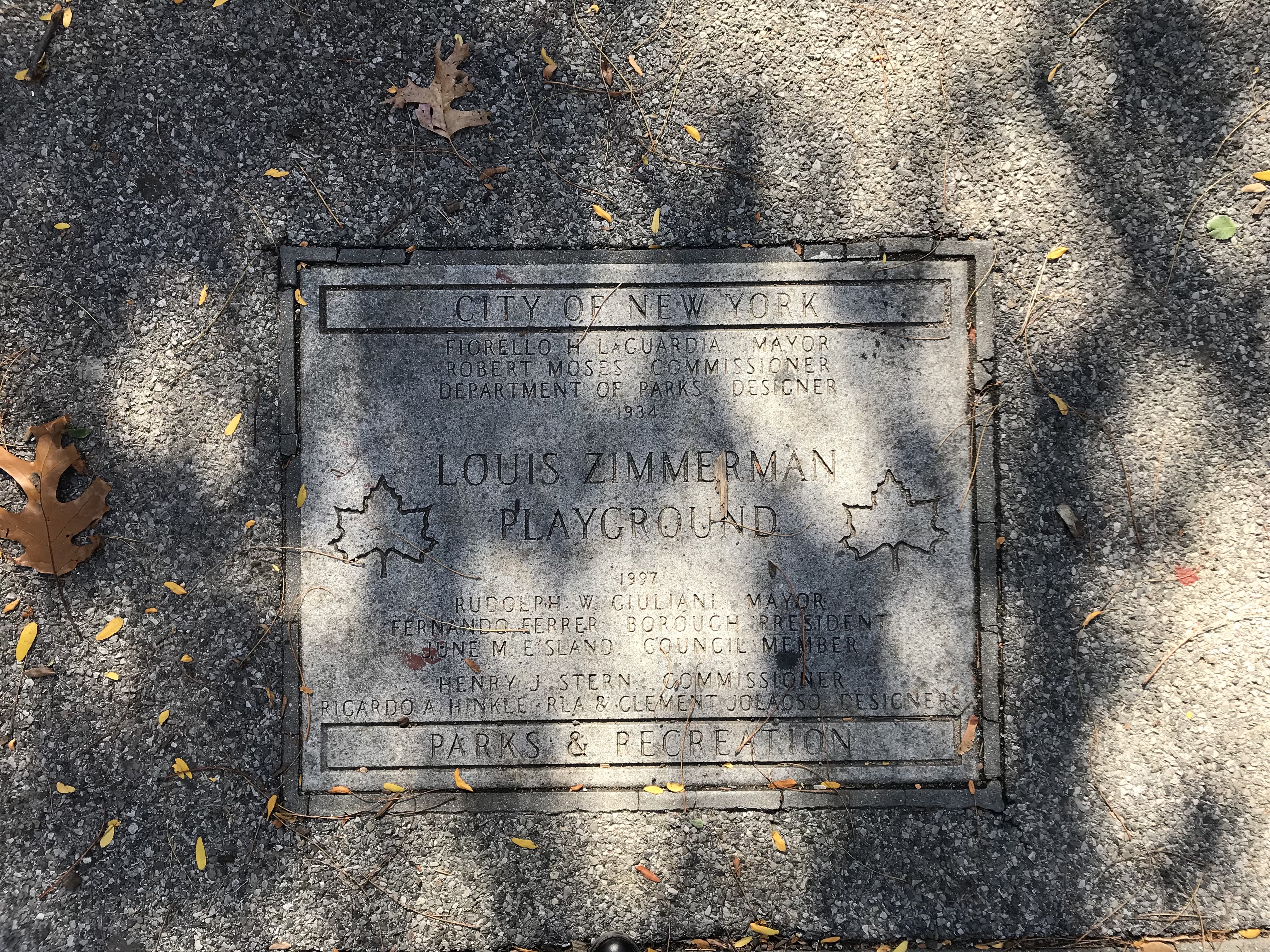 In 1931, NYC parks acquired the land for the Zimmerman Playground with money provided by the War Memorial Fund, established in 1921 with money gathered by the New York City Police Department.1 The Fund initially opened with $250,000, but by 1931, that amount had amassed to $350,000 due to investment by the City Chamberlain. In early 1934, Parks Commissioner Robert Moses pursed a court decree that released the endowment for public use. The money was then designated to be used for playground development in each of the five Boroughs—two in Manhattan, two in Staten Island, two in the Bronx, and one in Brooklyn—and construction began in March 1934. The playgrounds were concurrently dedicated and opened by Mayor Fiorello H. LaGuardia at Brooklyn's William E. Sheridan Playground on July 15, 1934 over a broadcast on the city's new public address system. In a press release, the Department of Parks deemed these War Memorial Playgrounds to be "the only modern playgrounds in the city."2 The facilities were to include a field house with playrooms, a public wading pool, a flag pole, and a bronze plaque on which the name of a single soldier would be inscribed.

Each of the nine the playgrounds opened were dedicated to a fallen citizen of the Borough in which the playground was located who had served in the US Military during WWI and who was generally well-regarded within his community. The individuals for which the playgrounds were named were selected by "World War Veterans Organizations and the various Divisional Associations."2 Special consideration was taken for members of "the three distinctive New York City divisions, namely; the 42nd or Rainbow Division, the 27th New York National Guard and the 77th-National Army Division."2

Zimmerman Playground's namesake, Corporal Louis Zimmerman, was a member of the "distinctive" 77th Division of the Headquarters Company 305th Infantry. Born on Manhattan's Upper East Side on April 20, 1895, Corporal Louis Zimmerman was one of eight children. The family later relocated to the Bronx, where Zimmerman attended P.S. 27 and graduated from Morris High School. In his few early adult years before the war, Zimmerman lived in the southern part of The Bronx at 1352 Webster Avenue and served as a police officer. (cite) After enlisting in the Army, Zimmerman served on the Western Front in the infantry, where he is believed to have fought in numerous battles. He was killed in action at age 23 in the Allies' final European push, the Argonne-Meuse Offensive, on November 5, 1918—less than one week before the Armistice that ended the Great War.

The aging Zimmerman Playground was renovated in 1996-7 under Mayor Rudy Giuliani. The park's antiquated features, such as the long-forgotten wading pool, were replaced and the facility was expanded to include basketball courts, water sprinklers, decorative pavement, and new playground equipment. Additionally, the renovations provided new fencing, a drinking fountain, a refurbished handball court, outdoor seating, and handicap ramps and railing. Foliage within the facility was replanted to provide shade and accentuate the redistributed play areas. The Playground is located in the modern Allerton neighborhood. It is only one block west from the Allerton Avenue Subway station, which serves the 2 and 5 trains, and two blocks east of the Bronx Park.