The current Dauphin County Courthouse, located in the Pennsylvania state capital of Harrisburg, is the third such building dedicated to meting out justice. It was completed in 1942 and dedicated the next year. The six-story, Georgia marble building is home to the county’s law library, courtrooms, judge chambers, administrative offices, numerous engraved quotes, etched windows, sculptures, and various works of art. It has been listed on the National Register of Historic Places since 1993.

The Dauphin County Courthouse was completed in 1942, dedicated in 1943 and added to the National Register of Historic Places in 1993. 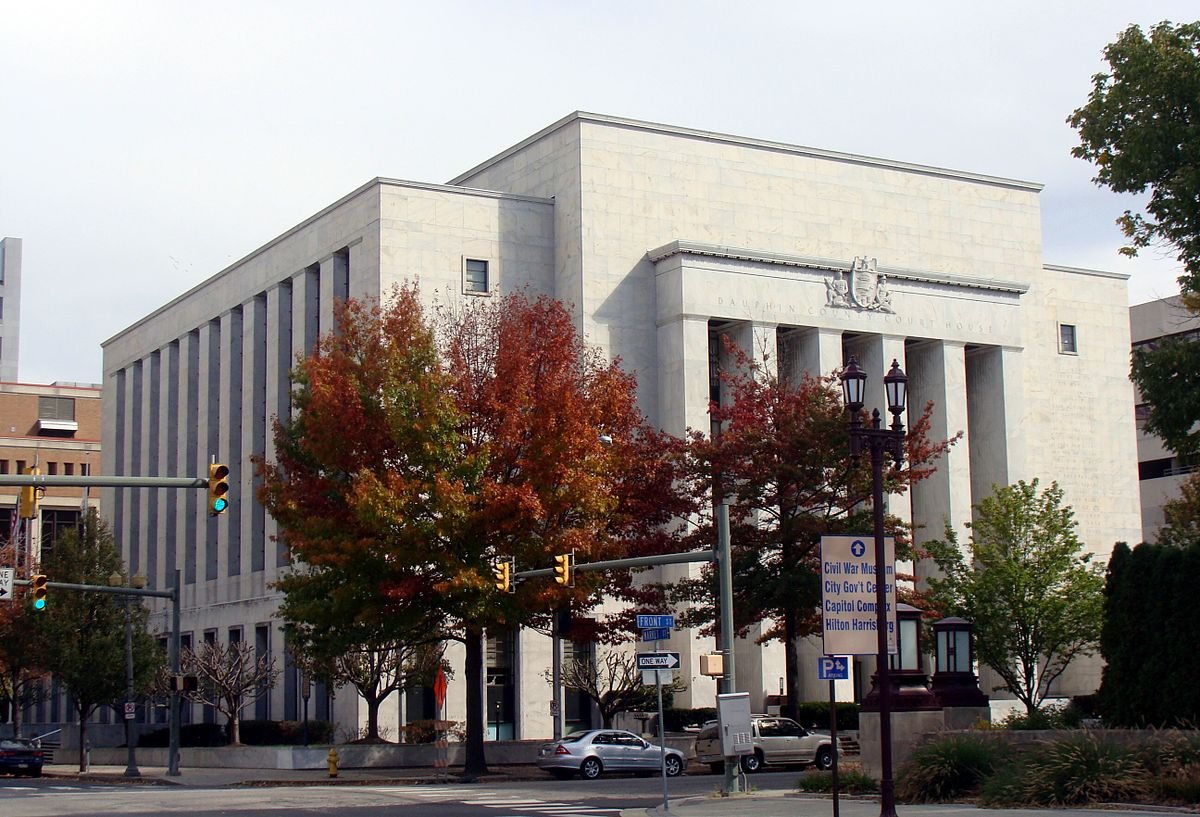 The fountain and 12-foot marble statue at the Front Street entrance to the courthouse. 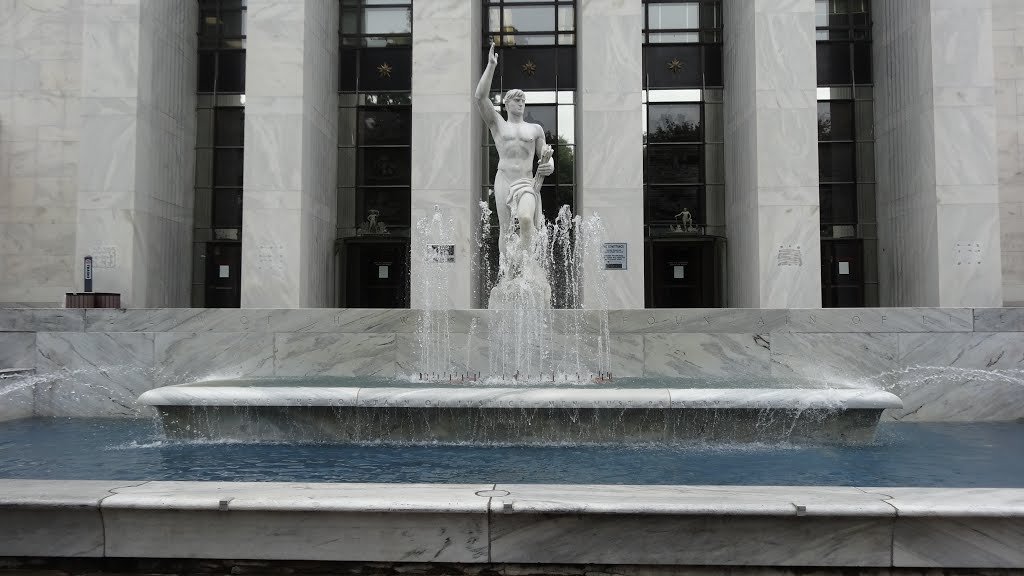 People head up the stairs to the Market Street Entrance to the courthouse. 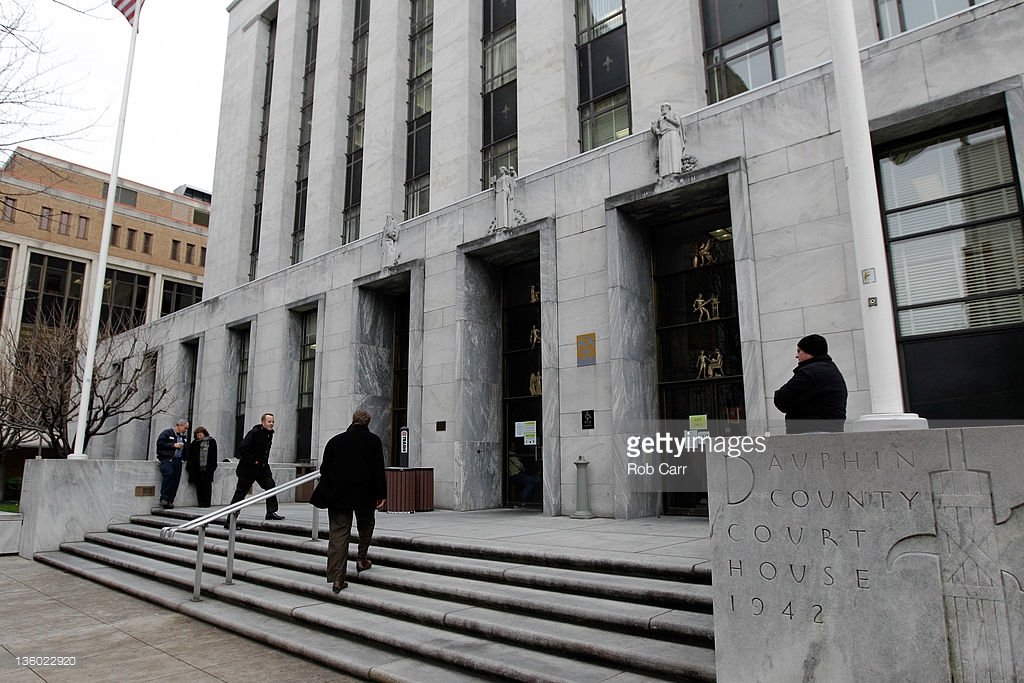 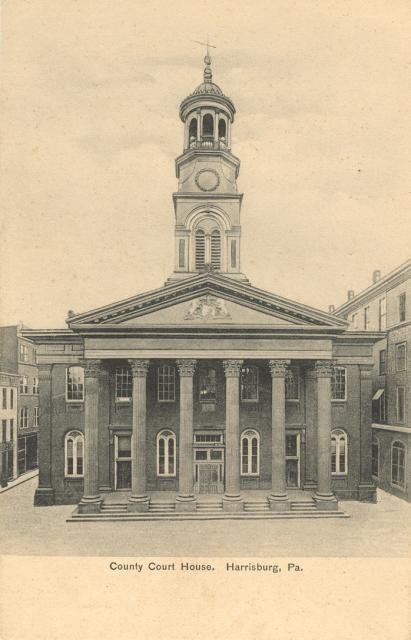 Courtroom #3, or the William Penn Room with white oak paneling and marble wall that holds the Pennsylvania Coat of Arms. 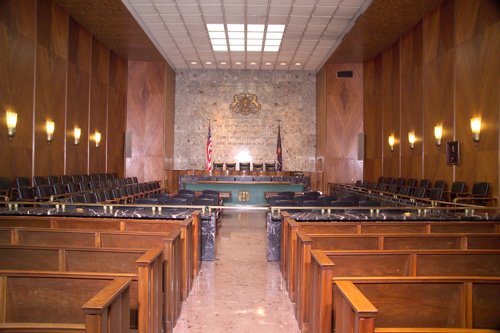 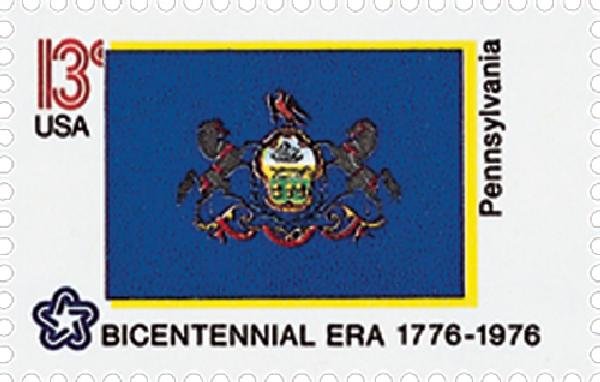 Dauphin County’s first county court system was convened in 1785 in a log structure owned by the town’s founder, John Harris, along Front Street.  A new courthouse, the first in the county, was built between 1792-1799 at the corner of Raspberry (later Court) and Market Streets.  This two-story, brick structure had two wings that extended from a semi-circular rotunda.  This courthouse was razed in 1860 to make way for a new structure which was completed in 1861.  This courthouse featured a large portico, central bell tower and two courtrooms.  An annex was added in in 1894 which included two additional courtrooms, judges’ chambers, and a law library.  By the late 1930s this courthouse was deemed obsolete, dilapidated and too small for the county’s needs.  As a result, plans to build the current courthouse began in earnest in 1938.

The county hired the architectural firm of Lawrie and Green to work in conjunction with the state Art Commission and international architect, Paul P. Cret, to design the current courthouse.  They proceeded to design a structure in a neo-classical revival of the art deco style.  The county government decided to relocate their new courthouse to the corner of Front and Market Streets and removed some historical structures, to include the William Kelker House which had been home to the Historical Society of Dauphin County since 1908, in order to do so.

The new, $2.5 million courthouse was dedicated in December of 1943 and was referred to as a “…showcase of marble, wood and terrazzo” and said to contain “…more words carved in the stone than any other courthouse in the nation” by retired political science professor Oliver Williams.   The Front Street entrance features a large portico with six, 55-foot pillars and a carved marble seal of Dauphin County with a Native American on one side and a settler on the other which was created by New York Sculptor, Paul Jennewein.  A large fountain with a 12-foot, three-ton marble statue of a man with upraised arm while crushing a monster with his right foot is also stationed at this entrance.  Entitled, “The Triumphant American,” it symbolizes man’s victory over injustice.  The granite steps lead to Dauphin County Room which features a terrazzo floor with a map of the county incorporated into it.  The map incorporates various colors, geographical features, townships and places of interest.

The Market Street entrance includes three carved marble figures that represent wisdom, justice, and mercy and opens to a lobby with walls of Red Numidian marble.  Floors two through six are home to the county’s courtrooms, most paneled in wood such as walnut and Brazilian rosewood.  Courtroom #3 is known as the William Penn room and features numerous quotes attributed to the state’s founder and the building’s fourth floor houses the law library, eight jury deliberation rooms and the Lawyers’ Lounge with the following appropriate Shakespearean quote on its walls, “Do as adversaries do in law, strive mightily, but eat and drink as friends.”