Dedicated a century after his death, this plaque recognizes Deputy Albert Anderson who was murdered on August 12, 1917. On that night, Oakland County Deputy Sheriff Anderson was present at Nine Mile Road and Woodward Avenue when he discovered a suspicious man in front of a nearby business. Anderson attempted to question the individual, but the man moved away and shot the deputy and then fled the scene. The police discovered that the individual had burglarized the business and stole a small number of coins. The case was never solved but this plaque was dedicated a century later and is located among several other plaques and memorials, including a plaque recognizing Vincent Chin and the formation of the civil rights organization American Citizens for Justice. 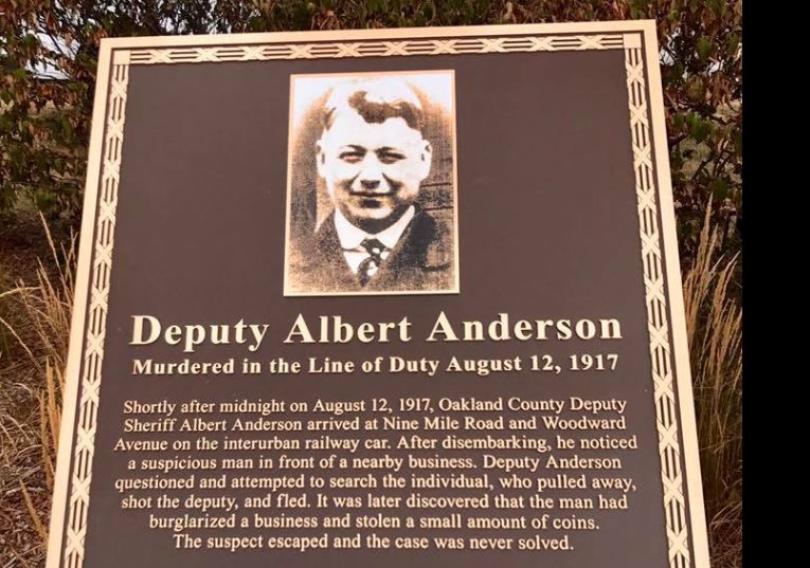 Deputy Anderson, checked on a suspicious shadow hiding near Woodward and 9 Mile Road. The suspect had stolen $3.80 in pennies in a nearby store. Anderson saw the suspect and tried to bring the suspect to well-lit area. when he did the suspect broke free and ran away.

The suspect fired a single shot with a .38-caliber bullet when the deputy chased after him, and the bullet struck him in the abdomen. The case was never solved because the suspect had got away. After several days later, Deputy Anderson died of his wound at the age of 47.

Deputy Anderson was a dedicated community volunteer and was a family man, he volunteered as a School Board Treasurer, and worked as a real estate developer. Anderson had served with the Oakland County Sheriff's Office for three years. He also had ten children with his wife Martha.