The War Dog Memorial is a life-size bronze statue of a reclining Doberman Pincher outside the University of Tennessee Veterinary College. This statue is an exact replica of the memorial to service dogs that is located within the U. S. Marine Corps Dog Cemetery at the U. S. Naval Base in Guam. This monument was made possible by Dr. Maurice Acree who donated funds that allowed for the creation of the statue that welcomes clients and visitors to the college since its dedication on July 17, 1998. The monument reminds visitors of the important military contributions and one of the many ways that "Man's Best Friend" has served humanity.

Each war dog had a specific role: scout dogs went ahead of their handlers to detect mines or enemy troops; messenger dogs carried correspondence or supplies; and infantry dogs alerted troops of the enemy. 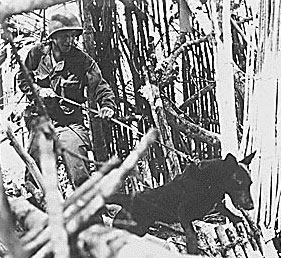 This monument to the working dogs of the USMC was dedicated in 1998 and is a replica of a previous monument in Guam. 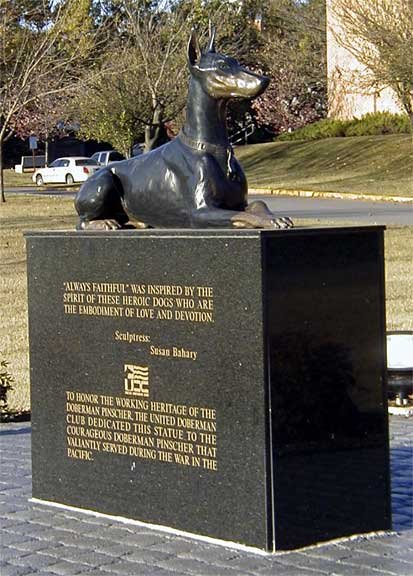 In 1935, the U. S. Marine Corps began a formal program using dogs as sentries to alert soldiers to potential dangers. The breed of choice was the Doberman, however, German Shepherds and Labrador Retrievers were also used. The use of canines in the military expanded dramatically in WWII when canines served military police, delivered messages, and also assisted scouts and infantry units.

The Marine Corps' War Dog Training School was first located at Quantico Bay in Cuba. The second and much larger training facility for canines was located at Marine Corps Base Camp Lejeune in North Carolina. At this base, dogs completed a rigorous six-week obedience course. Upon successful completion of the course, the dogs were enlisted and given the rank of private. They were also assigned a handler, known as a "dogman" among many in the military. The dogs could be promoted, with many reaching the rank of Sergeant after two years of service. Because most of the men assigned as dog handlers were fresh out of boot camp, there were occasions where a dog might outrank their handler.

A total of 1,047 dogs were enlisted during WWII. Of these, 465 served in combat with the majority being stationed in the South Pacific. The first Marine War Dog Memorial was dedicated in Guam in 1994, the 50th anniversary of the liberation of this small island. During the liberation of Guam, 25 dogs died in service. In recognition of their service, the name of each dog that died in the liberation of the island is inscribed on the base of this statue and the original.

The dogs that served the Marine Corps and other branches of the U.S. military are credited with saving hundreds of American lives. In 1945, the military leaders disbanded the Dog Platoons were disbanded. The dogs were "retrained" for civilian life and sent to live with families. However, the military continues to utilize canine to assist military police on bases throughout the world.