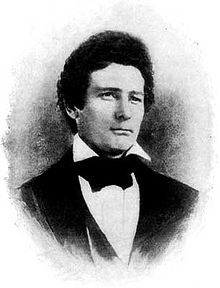 Abraham Lincoln and other members of the Whig party 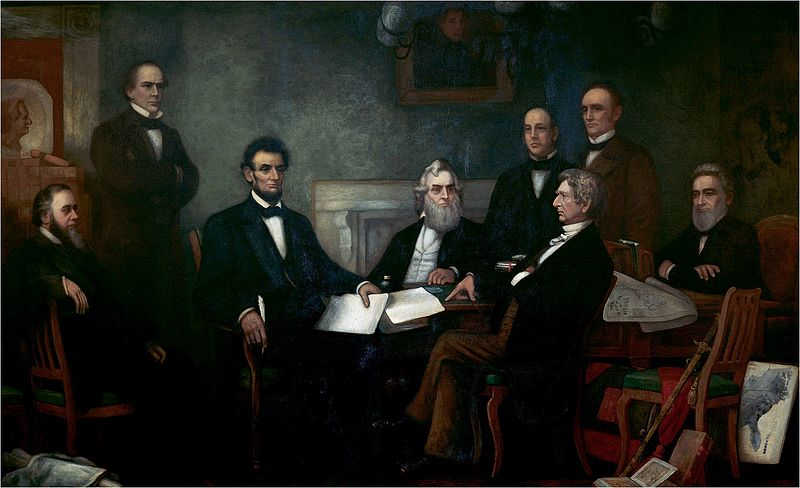 This is the stone marker that is at the site. 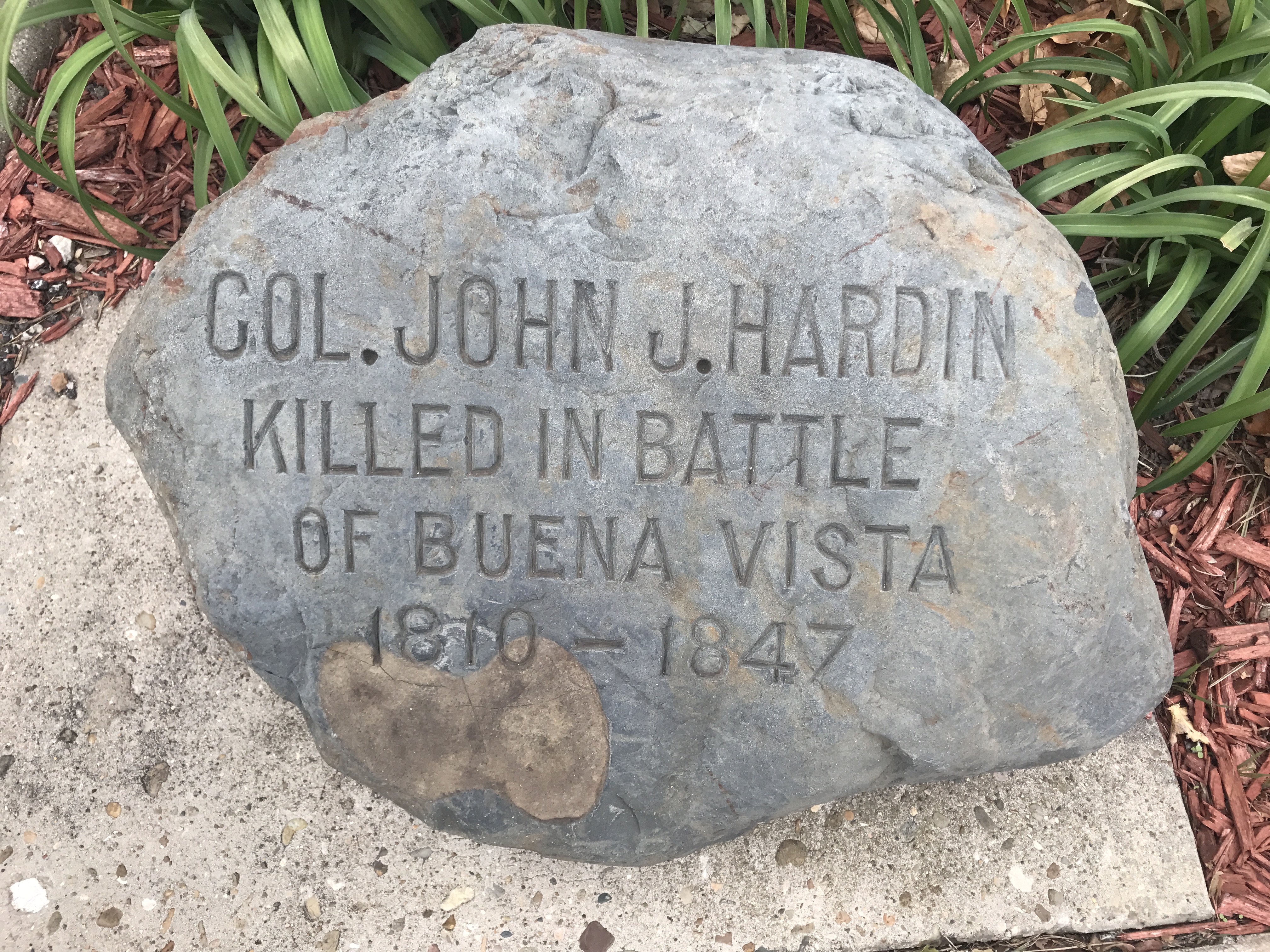 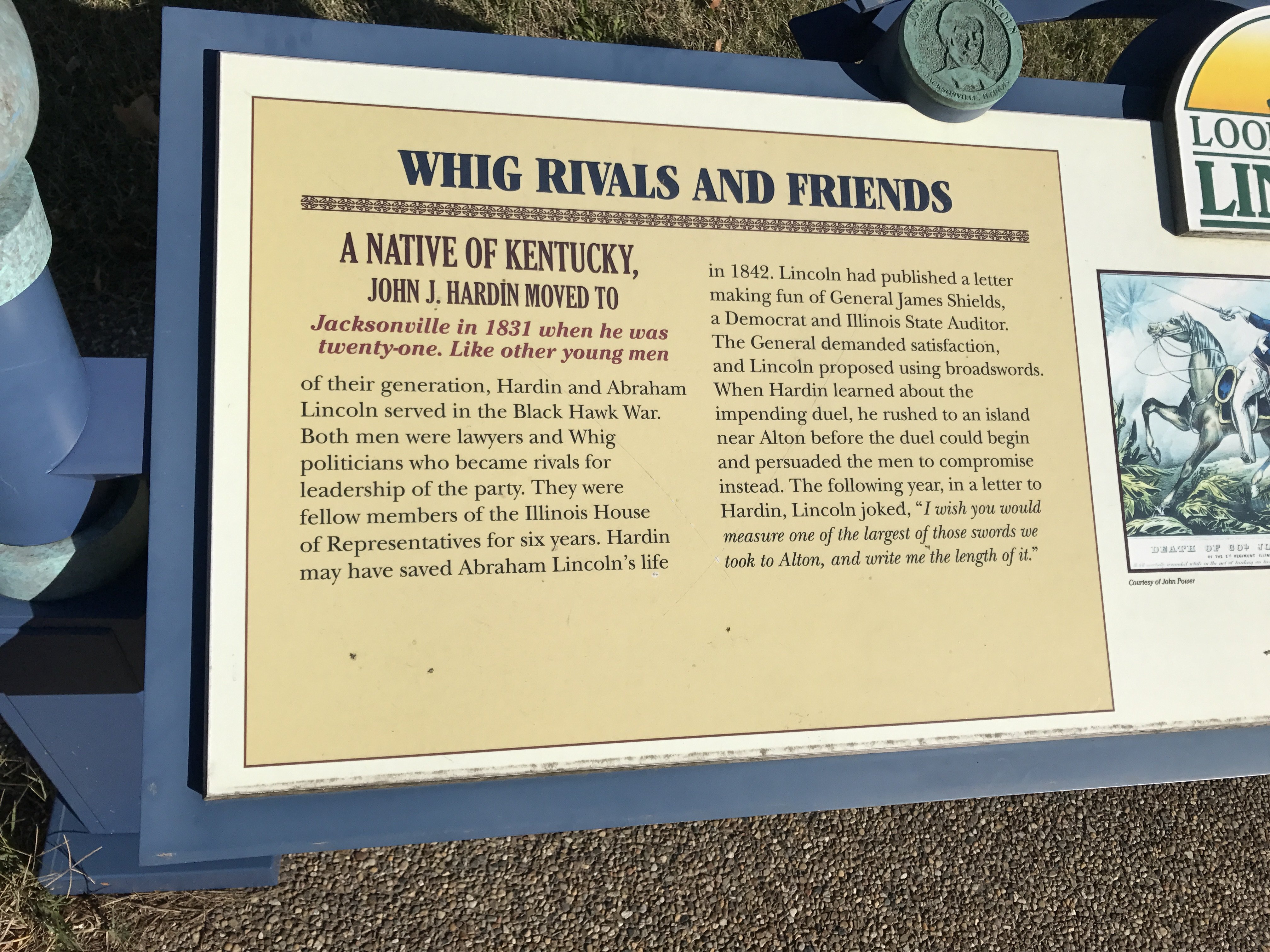 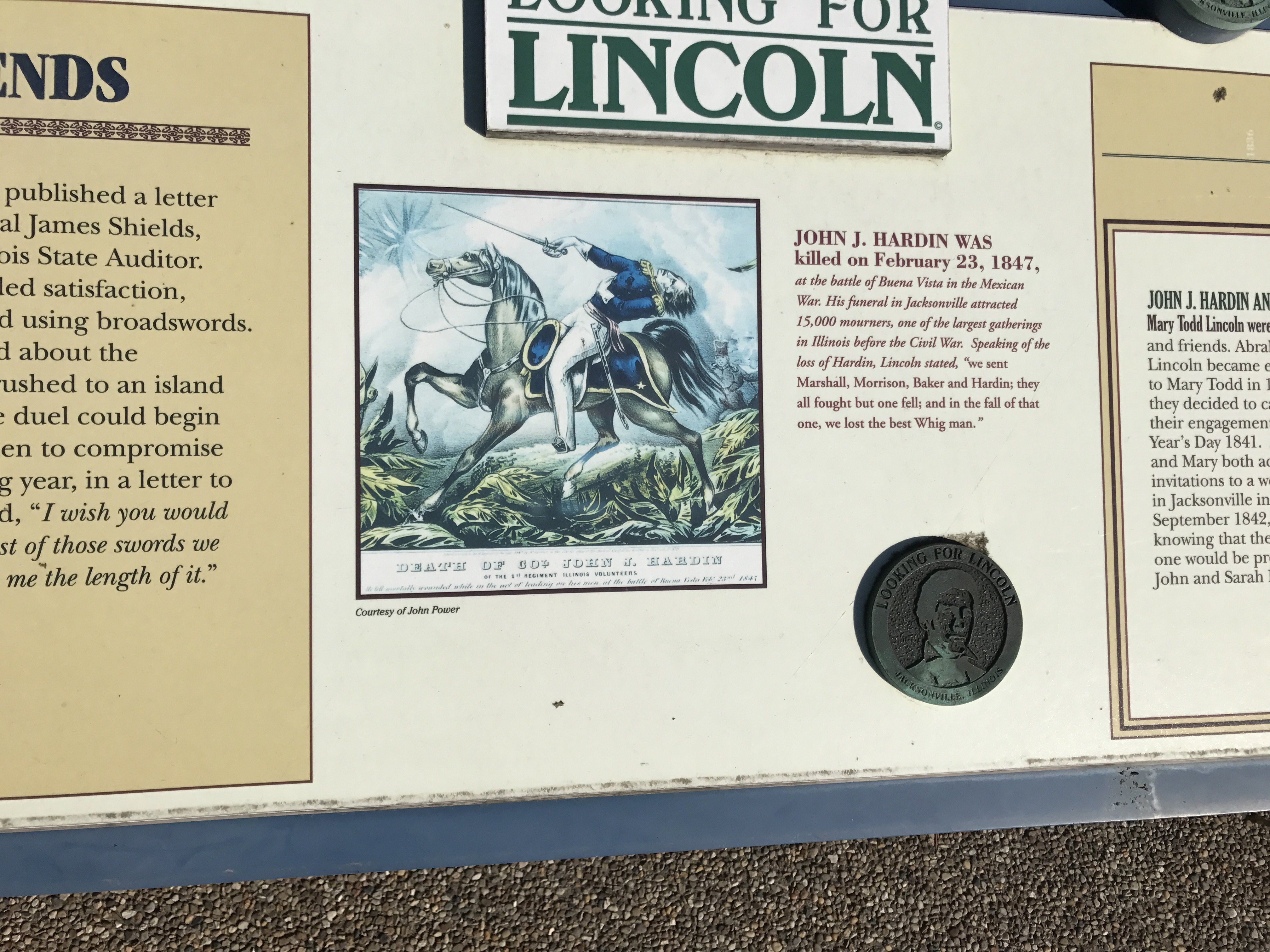 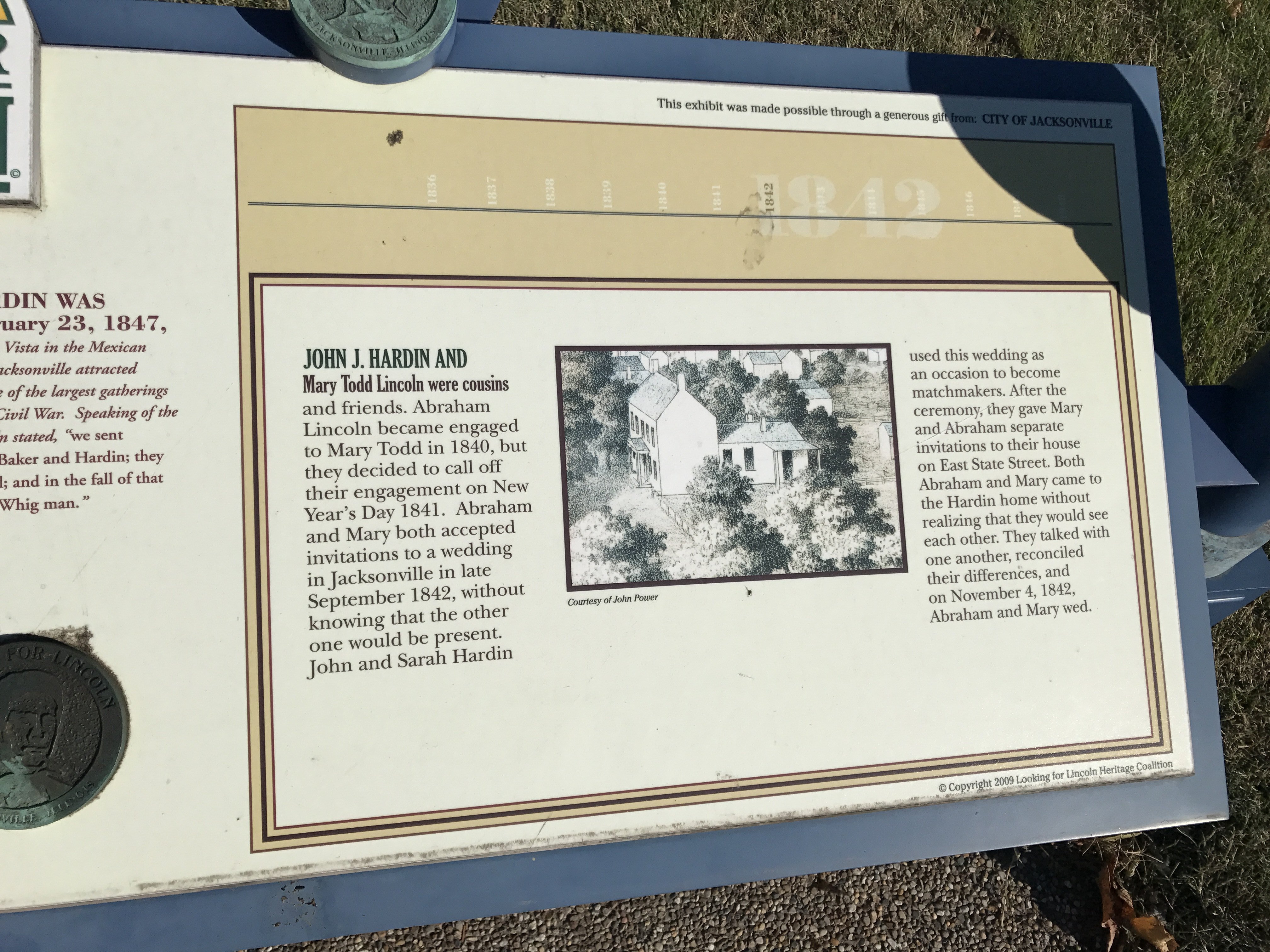 The site is right beside this intersection, we have Hardin Avenue after John J. Hardin. 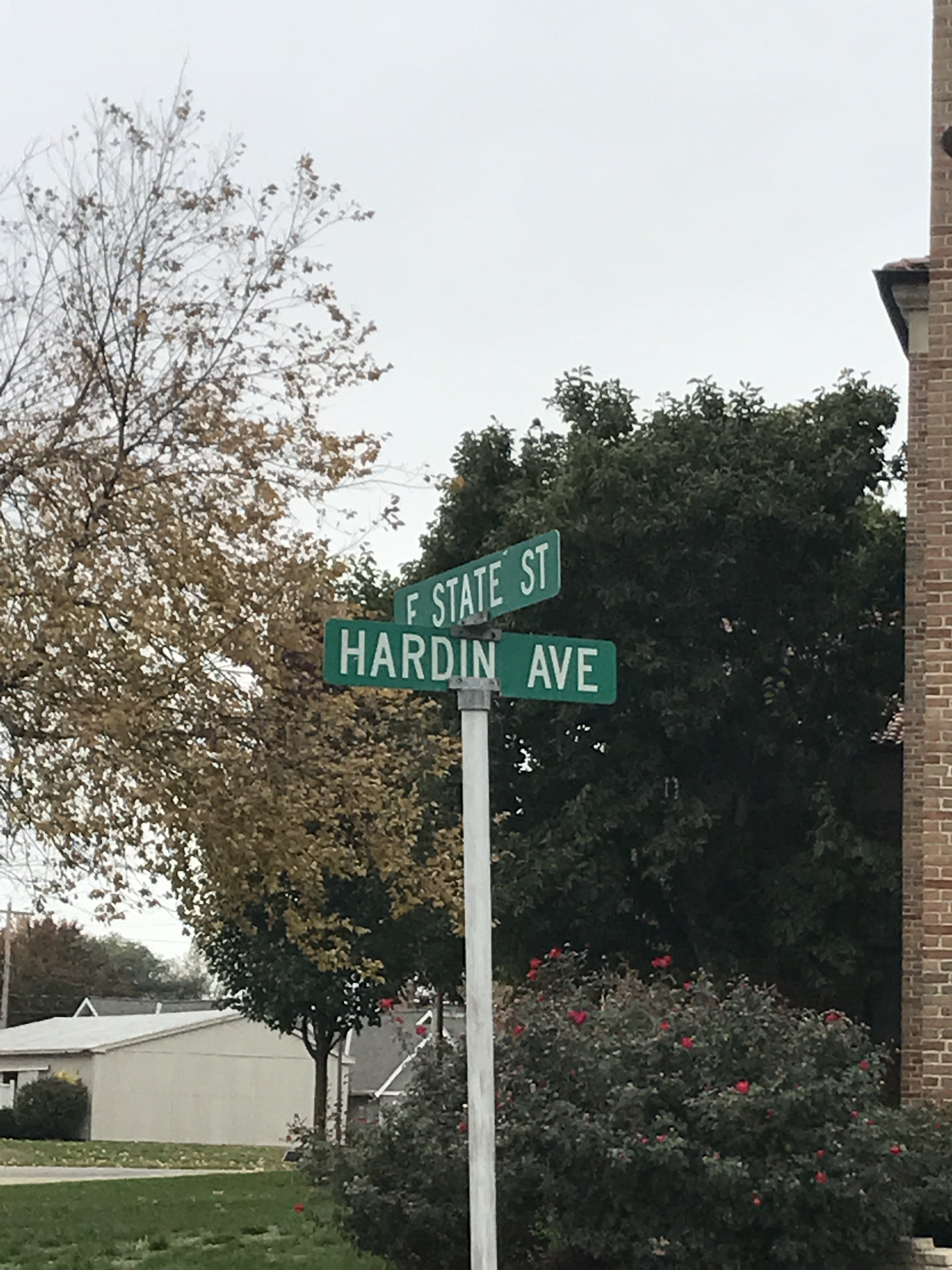 John J. Hardin first became an attorney in Jacksonville in the 1830s. He and Lincoln were both local lawyers and members of the Whig party, however actually had a rivalry as they fought for leadership among the Whigs. However, despite their rivalry, Hardin still rushed to Alton when he got word of a duel that was going to happen between Lincoln and James Shields. in September of 1842, Shields, a political rival of Lincoln, was upset about a newspaper article supposedly written by Lincoln. Shields challenged Lincoln to a duel, and they had decided to use broadswords in their fight. When Hardin was informed of the upcoming duel he and Dr. Revel W. English went straight to Lincoln and Shields to stop the battle. They used the friendship they had with both men to prevent the fight from happening.

Lincoln and Hardin worked together on many things, but they were never actually friends. In 1843 Lincoln campaigned for Hardin as he ran for Congress, however when the time came, Lincoln did not vote for him. They experienced a decade long rivalry, but when Hardin died, and later when Lincoln became president, he looked after what Hardin had left behind. Lincoln appointed Hardin's brother-in-law to a Panama diplomatic position and made sure Hardin's widow was in good shape. Lincoln also referred to Hardin as "our best Whig," and said he was a "man of desperate energy and perseverance who ‘never backs out’ and who was ‘talented, energetic, usually generous and magnanimous." Lincoln knew that Hardin was a worthy rival of his, but was still willing to admit the good qualities that Hardin possessed.


Folklore says, the Hardin family hosted a party, and John J. Hardin actually invited Lincoln to the party, knowing his cousin Mary Todd would be there. They say this party is where Lincoln and Mary Todd rekindled their romance.