“More is required of public officials than slogans and handshakes and press releases. More is required. We must hold ourselves strictly accountable. We must provide the people with a vision of the future." Barbara Jordan The glass ceiling cracked in 1966 when Barbara Jordan “the voice that stirred the nation” was elected the first Black women to the Texas State Senate. In 1972, the ceiling was smashed when Jordan fought to represent Texas in the United States House of Representatives. Barbara Jordan pursued to better the lives of citizens in Texas by helping begin the first law on minimum wage. She, also, developed the Texas Employment Practices Commission; a state agency has given the task to manage and deliver the workforce development services to employers and people in search of jobs in Texas. “Their major functions of the commission include: implementing child care amenities, training and adult education, literacy services, equipping tax programs, maintaining services for people with disabilities to gain training and employment opportunities, and moreover strive for eliminating discrimination in the workplace.” Barbara Jordan also made a big leap in her career by joining the House Judiciary Committee, and developing “a national spotlight on the Watergate scandal”. In 1974, she gave a significant speech for Nixon’s impeachment for her illegal political initiatives. Jordan refused to “sit here and be an idle spectator to the diminution, the subversion, the destruction of the Constitution” under Nixon’s command as President. She gave a clear definition of the role of impeachment and the importance of the check and balance system between the branches of government. In addition, Jordan stated her points about the debate of Pres. Nixon’s relation to the break-in. The nation had questions, “Did Nixon commit this crime, and will he be impeached?” Barbara Jordan gave her view in the matter, ending her televised speech with, “We know this question…”, “We should now forthwith proceed to answer the question. It is a reason, and not passion, which must guide our deliberations, guide our debate, and guide our decision.”

"Education remains the key to both economic and political empowerment." - Barbara Jordan 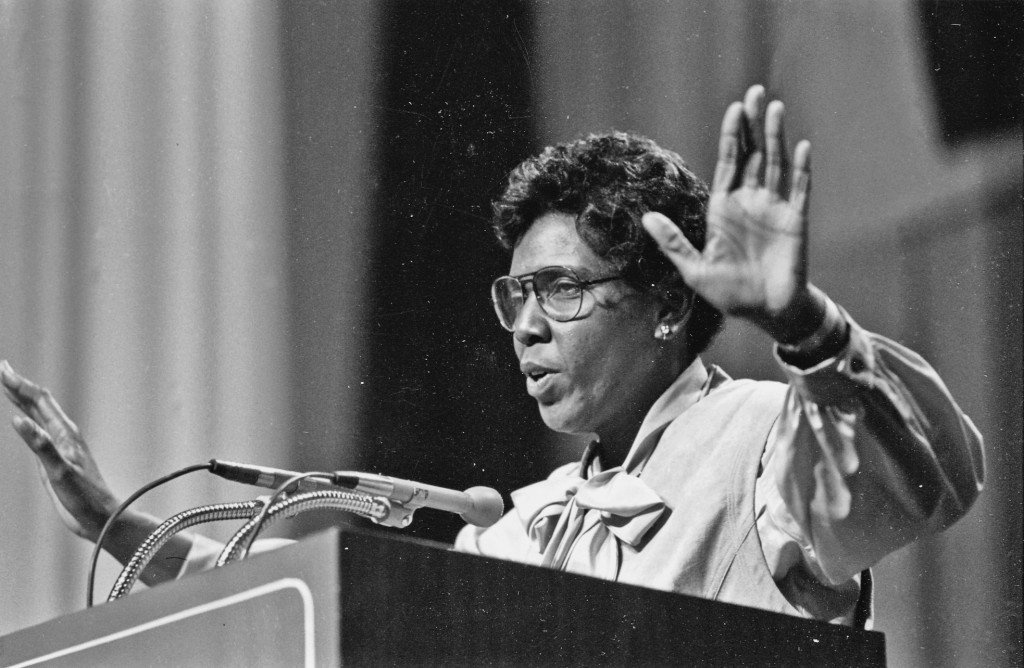 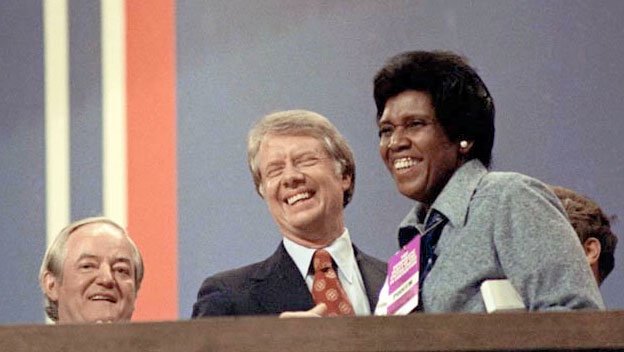 "We are a party of innovation. We do not reject our traditions, but we are willing to adapt to changing circumstances, when change we must. We are willing to suffer the discomfort of change in order to achieve a better future." Barbara Jordan 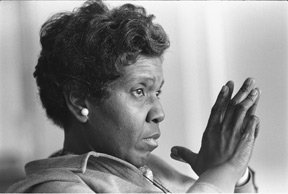 “More is required of public officials than slogans and handshakes and press releases. More is required. We must hold ourselves strictly accountable. We must provide the people with a vision of the future." Barbara Jordan 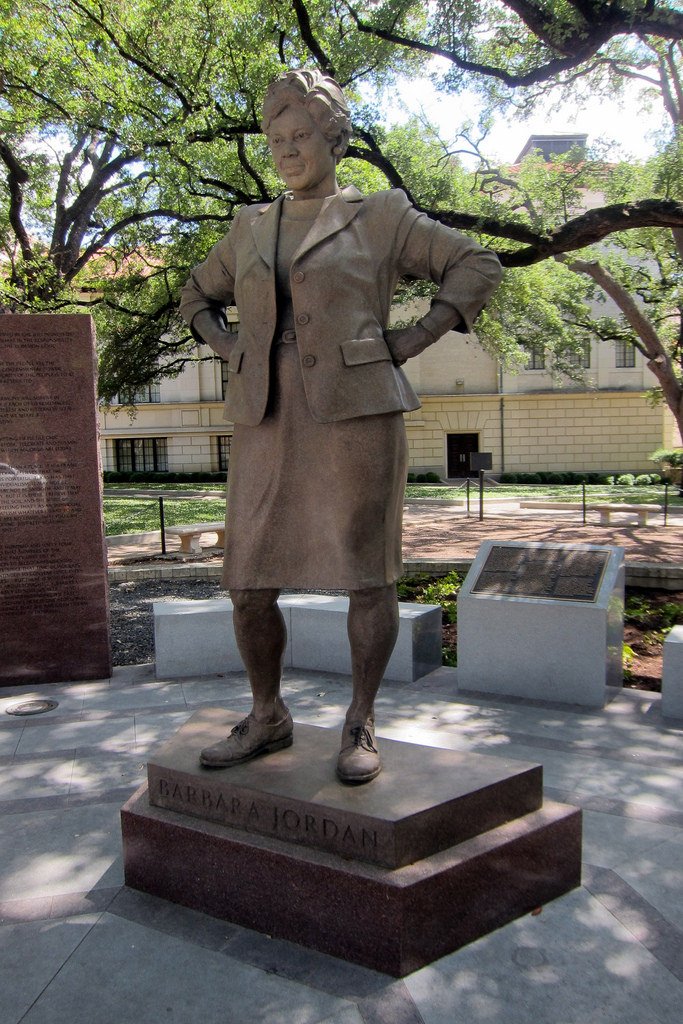 “Think what a better would it would be if we all, the whole world, had cookies and milk about three o’clock every afternoon and then lay down on our blankets for a nap.”

Barbara was born in Houston, Texas on February 21, 1936, daughter of a Baptist Minister, Reverend Benjamin and Arlyn Jordan and youngest of three girls. She grew up in a poor neighbored in the Fifth Ward in Houston while segregation lacerated the state. Her family raised her with strong moral values; however, her grandfather John Ed Patten influenced and molded her confidence and determination. He told her, “You don’t have to be like those others… You just trot your own horse and don’t get into the same rut as everyone else.” Barbara carried three pictures of Grandpa Patten in her wallet; in one he wore a hat, in another, he was in a barber chair, and lastly one in a wagon. Her grandfather was an entrepreneur who collected scraps of the street. Jordan was captivated by her grandfather’s aptitude to “put together whatever combination of things necessary and just kind of make it,” stating, “That had an impact on me.” He also, taught her everyday lessons about life, using the Bible and other readings about literature and philosophy to grow intuition, judgement, and understanding.1-25

Barbara Jordan attended Phillis Wheatley High School, where her gift of public speaking, developing arguments and language was showcased. Living in the time of segregation, prejudice surrounded her. Early on she saw nothing that demonstrated Black and white people coming together on a friendly basis. Segregation was embedded in her school system were teachers were ‘color- strucked’ (“the term students used to indicate a bias that favored those with”) lighter skin color, the church, the city, and her bus route. The only posters she saw of Black women were in maid uniforms. “The idea of a Black person going to a hotel for any other purpose than a back-door delivery was impossible.” Barbara wanted to witness an end to segregation, but she knew it was going to be a long road. In her mind, Jordan noticed she needed to gain a degree of acceptance to prove to people what she could do. This way, she could begin making a stand against segregation. In the course of her time at Phillis Wheatley High School, she found public speaking to be her way to change the outlook of the world; this approach was one way out of “oppression of racism.” The Dean of the Girls, Evelyn Cunningham, gave Barbara Jordan an opportunity to become the tenth grade attendant to Ms. Wheatley. Whoever was elected became a “symbol of the high school.” However, she didn’t run feeling out of place, feeling “she wasn’t the right color.” Instead she put her energy into becoming “Girl of the Year.” She put all her effort and energy into developing her public speaking abilities she grew up with all her life. The more she practiced, the more teachers started to notice her skill. Mr. Ashton Jerome Oliver referred her to the National Ushers Convention Oratorical Contest in Chicago, Illinois, were she won first place. Later in 1952, she was awarded the Girl of the Year Award and was established as a well- known speaker all over Texas.1-25

She graduated from Phillis Wheatley High School in 1952 with honors. Jordan later graduated in top of her class at Texas Southern University majoring in political science and history. After she graduated she went to earn a law degree from Boston University in 1959. Barbara attributed a speech from Edith S. Sampson she heard in high school with motivating her to become a lawyer. She excelled at the debate team at Texas Southern University and defeated students from other high-status schools including Harvard and Yale. While she was winning many debate tournaments and gaining further recognition for her talents, Jordan was sleeping in ‘colored only’ hotels, eating at ‘colored’ restaurants, and drinking from ‘colored’ water fountains. Barbara’s need to end segregation, and “overcome adversity by her own will” was as strong as ever. “It was the heart and soul of who she was.” At Boston University law school, Jordan was one of six women, and one of two Black women in her class. While in school she established a “theological autonomy”, developed critical thinking skills, and “fell in love with the language of law”. Additionally she gained a sense of independence, the drawn to the chapel, and a deeper passion to change the world she saw around her. Barbara Jordan passed the Massachusetts and Texas bars to practice law in both states. Then she moved back to Houston to open a law office in the Fifth Ward.1-25

Jordan worked as a lawyer briefly out of her parent’s house and then became employed as an administrative assistant to a county judge. Her political world changed when she worked with the presidential campaign in 1960 for John F. Kennedy. During this time, Barbara managed an extremely prepared “get- out- the – vote” program. Through promoting this program and John F. Kennedy’s election, she gave many speeches to multiple “political groups, meetings, civic organizations, churches, and clubs.” In 1962 and 1964, Barbara Jordan ran for the Texas House of Representatives; however, she lost both years. In 1966, she ran and won for the Texas Senate becoming the first Africa American state senator in the US since 1883 and the first African American women to be elected to the body. Jordan was ready to start the movement of change, first by creating the first law on minimum wage, in addition, to forming the Texas Fair Employment Practices Commission, deleting of discriminatory language in business contracts, and established the environmental legislation.1-25

In 1972, Jordan’s colleagues voted her to be a president pro tempore of the state senate- the first Black woman to hold this position. She continued to have a successful year by winning the election for the U.S. House of Representatives. When she arrives to Washington D.C., she was termed to assist Lyndon Johnson to secure a place on the Judiciary and Ways and Means committees. During her term in the House, the Watergate scandal was brought to light. Barbara pressed for President Nixon’s impeachment. "I am not going to sit here and be an idle spectator to the diminution, the subversion, the destruction of the Constitution," Jordan spoke on screen during her speech throughout the proceedings for Watergate. Barbara didn’t pursue reelection and completed her term in 1979. She sought to use her time to educate students who were to become future politicians and public officials and became a professor at the University of Texas at Austin.1-25