The Embassy of Bolivia

The Embassy of Bolivia was located in a historic mansion in Dupont Square and is currently located among other embassies on Massachusetts Avenue. In addition to this embassy, Bolivia also manages consulates in Houston, Los Angeles, Miami, and New York City.

A protestor holds a sign reading "No to imperialism." Evo Morales's insulting of the United States regimen was a major factor tat led to his first presidential term. 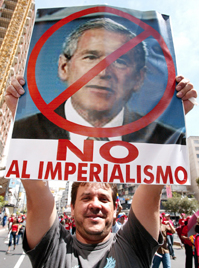 A group of celebrating Bolivians gather around the Plurinational State's embassy. 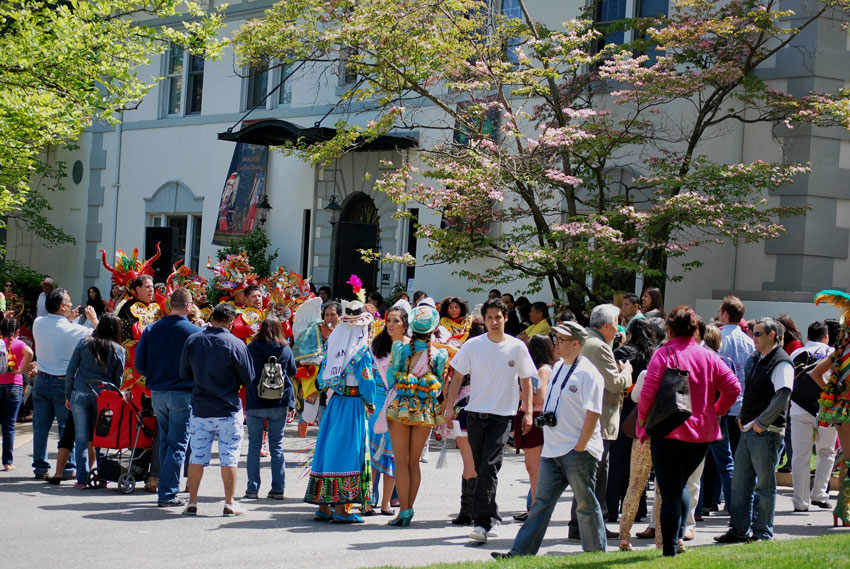 The United States first initiated diplomatic relations with Bolivia in 1849 once it had gained full independence from Spain. However, the two countries have experienced several conflicts regarding their differing techniques in management and administration. The Bolivian Embassy, located in Washington D.C., signifies the second era of bilateral relations between the United States and Bolivia. As a direct result of tensions in their discourse in the early 2000s specifically in regards to Bolivia's illegal surplus protection of coca, Bolivia and the United States revoked their ambassadors from the respective countries. The countries would leave their respective buildings closed until reestablishment occurred in 2014, as Evo's administration began trying to fortify Bolivia's international image. They hoped to encourage an equilibrium between the two conflicting parties. In addition to the maintenance of diplomacy between the two countries, the Bolivian Embassy also serves the Bolivian population living in the United States, managing several consulates located around the country.

Despite the standing consulates and embassies in each country, the United States and Bolivia have struggled in a strained diplomatic relationship since the 1940s. This genesis of tension began with Bolivia accusing several United States and British-based corporations of siding with Paraguay during the War on the Chaco. Disillusioned and left with less territory, the lower middle class fastened on to the scapegoat position that was imposed upon the United States. This animosity towards the United States only continued to grow as the U.S. played a key role in condemning Bolivia's ignoring of international law. Specifically, Bolivia continues to negate the mandate to regulate the trade of coca and cocaine. This demand to reform their national policies was perceived as an attack on their autonomy as a nation, a concept they fought for perilously against Spanish colonial rule.

In hopes of devolving the tension of several aforementioned instances, the two countries entered into a Bilateral Trade Agreement, put into force in 2001. This agreement held the principles of sustaining the economy of Bolivia, encouraging workers' rights, facilitating trade between the two countries, and creating an avenue of accountability on either Party. Although this treaty functioned well, the culturally embedded distrust of the United States would soon lead to its demise. In fact, Evo Morales, Bolivia's current president, cited the Bilateral Trade Agreement as proof of the United States' desire to start a civil coup against his administration. With one of his main platforms being a "neo-liberal" economy, he cited the United States as an oppressor to development in the country. Encouraging the middle and working class to vote for his platform, Evo instructed his supporters to negate the "imperialistic" approaches of the United States - in their entrance into Bolivia as well as their attempts to implement a capitalist ideology. This deliberate attack on the United States government would lead to protests in both embassies in 2008, the Bilateral Trade Agreement's abolishment, and the deportation of ambassadors from either country out of their area of service. Additionally, Evo also demanded that the US Drug Enforcement Administration and the US Agency for International Development flee the country as well.

Despite the embittered stance that Bolivia culturally carries against the United States, even while the president of Bolivia continues to speak against their imperialism, strides have been taken to repair their severed relationship. Ambassadors have returned to either country, a new trading treaty has been set in place, and the United States has pardoned a debt of over 300 million dollars that the Plurinational State of Bolivia would have otherwise never been able to pay.