The Bonneville Salt Flats are a spectacular and unique site to see. It is one of the largest salts flats in the United States. In Utah, west of the Great Salt Lake, there are 30,000 acres of flat land, which is composed of white salt crust. In the center of the flats, it is about 5 feet thick of salt, while on the outer crust, it is about 5 inches thick. The Bonneville Salt Flats were formed at the end of the last Ice Age, when the ancient Lake Bonneville dried up. These flats were discovered first by the Native Americans, who explained the salt flats to the white explorers, such as Jedediah Smith, what was there.

During the cooler months, the Bonneville Salt Flats flood because evaporation decreases. 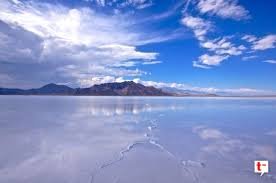 During the spring an summer, any water that flows onto the Bonneville Salt Flats, from rain or watershed, evaporates quickly because of the warmer temperatures.

After the brine is sucked from underneath the Bonneville Salt Flats, this is what is left behind. There is only a small percentage of potash in the water solution. All other minerals are left behind to dry up on the salt flats. 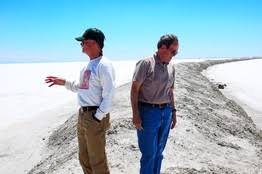 The Bonneville Salt Flats formed after the Ancient Bonneville Lake dried up, after the last Ice Age. The salt and other minerals were left behind, and created a 5 feet thick salt crust in the center. 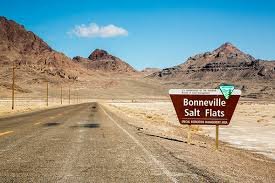 Before the last Ice Age, Lake Bonneville covered nearly two-thirds of Utah. The lake was about 1,000 feet deep, where the salt flats are located today. When this ancient lake began to dry up, salt and other minerals, such as gypsum, were left behind. A watershed was formed from the minerals that were left behind. A watershed is an area of land that divides water from flowing into different bodies of water. In the spring and summer, the water that is flowing over the salt flats is quickly evaporated because of the heat. The water is the only thing being evaporated therefore, all of the minerals and salt in the water are being left behind. When winter comes, the salt flats are flooded with water, from rainfall and watershed. Evaporation decreases because of the cooler temperatures. The salt flats are flooded with several inches of water, during the cooler months. Therefore, the water that is flowing over the flats is constantly replenishing the minerals throughout the year.

The Native Americans were one of the first to discover the land. It was during the 1820s, that explorers were discovering, and exploring the area for themselves. Jedediah Smith was possibly the first white man to cross the Bonneville Salt Flats in 1927. In 1833, Joseph Walker was the mapping the area around the salt flats. While his was doing this, he cross the north perimeter of the salt flats. Joseph Walker named the salt flats after Benjamin Bonneville, whom he worked for.

One of the main uses for the Bonneville Salt Flats is automobile racing. Located on the salt flats, the racing area is about 13 miles. William D. Rishel, is the man who discovered the salt flats for being a great place for speed racing. Land racing on the salt flats really kicked off in the 1930s, when Ab Jenkins started racing on the salt flats. Jenkins described the land as, “The salt beds are better than any of the existing board, brick, or cement tracks of the world because none of these is large enough.” Jenkins also explains that the salt provides a cooling effect to the tires. Jenkins set many records on the Bonneville Salt Flats. The most impressive recorded Ab Jenkins holds is the world’s 24 hour record. Driving the Pierce-Arrow, and traveling a total of 2,710 miles, over 24 hours, he beat his previous record of an average of 112.92 MPH. Jenkins’s average speed this time, in 1933, was 117.77 MPH. He did stop to refuel, but Jenkins never step foot out of the car. The Bonneville Speedway is said to be the most ideal spot for speed racing.

Today, racers say the Bonneville Salt Flats are slowly deteriorating. This is causing a concern for many speed racers who enjoy the Bonneville Speedway. The racers are convinced that the problem is coming from a potash mine very close by, Intrepid Potash Inc. The potash is a form of salt called, potassium chloride. The potash can be used for gun powder and lethal injections. The mine is sucking brine from underneath the salt flats. Within the brine, there is a very small percentage of the potassium chloride Intrepid wants. Therefore, Intrepid, takes what they need and leave the rest to dry up. Geologist say that flats have not changed drastically, in size. The area of the salt flats fluctuates as rainfall differs over time. Some Geologist, say it’s the weather causing changes to the Bonneville salt flats. Either way, the Bonneville Salt Flats have been here for over 14,000, they will continue to be constructed by a salt crust, and they will still be flat.