Whipple Hall was built in 1882, and is named after Dr. Samuel L. Whipple. Whipple hall was originally called Whipple academy, and was used as a prep school for students wishing to attend Illinois College. 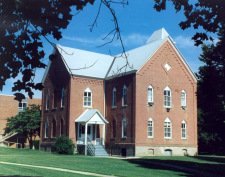 Early IC History
Whipple hall, as you see it today, was built in 1882 for a cost of just $7,000. Whipple Hall, however, was not always Whipple Hall. It all started in 1869 when the Trustees of Illinois College thought that there was a need for a preparatory school for upcoming students that were planning on attending Illinois College, but were not quite ready for college yet. The first Whipple Academy was built on the Jacksonville square. This was funded by a man named Dr. Samuel L. Whipple, who donated $10,000 to the Whipple Academy project. This man is from whom Whipple Hall earned it's name, as you probably guessed.

Inside of Whipple Hall you will find some interesting things, such as the congressional hall of fame, and the Paul Findley museum. The congressional hall of fame is a tradition within Illinois College where they will hang a picture up of any student that ever attended the college who became a US senator or representative. The Paul Findley museum is a section of the building that has been dedicated ti Paul Findley, a former congressmen and graduate of Illinois college. Within the museum there are various items from Findley's history and life. However perhaps the most interesting one is a couch made from horse that is believed to have originally belonged to Abraham Lincoln himself.

Whipple Hall  serves as a meeting place for the Alpha Phi Omega and Pi Pi Rho literary societies. It was during a Pi Pi Rho event that a ghostly encounter supposedly occurred. A woman withdrew from the event to find a personal item on the Alpha Phi Omega floor, which is in the upper part of the hall. As she ascended the stairs, she noticed a man dressed completely in grey waiting in the middle section of the staircase. Upon closer examination, the woman noticed his face was missing, and this specter became known as the “Gray Ghost” across campus (Taylor and Horton).